Navin Fought Cancer Like A Hero, Now Relapse Is Threatening His Life | Milaap

Navin Fought Cancer Like A Hero, Now Relapse Is Threatening His Life 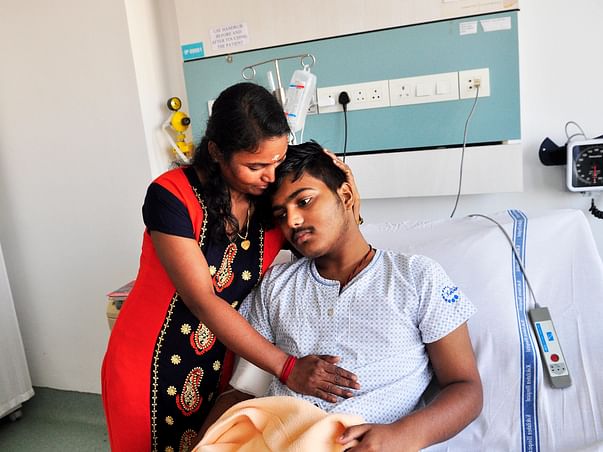 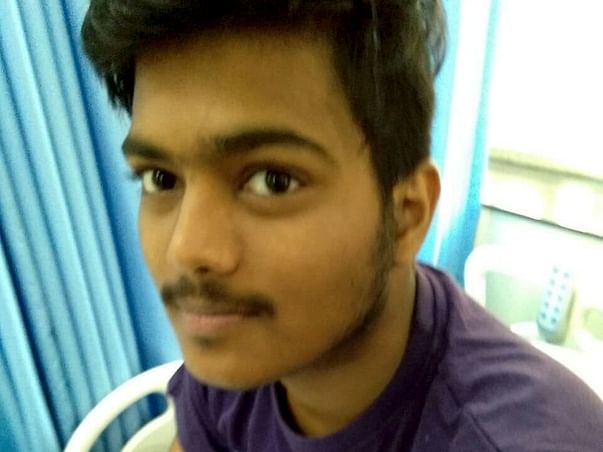 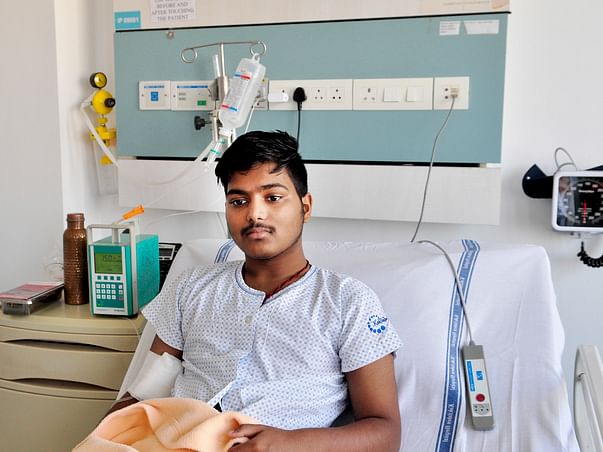 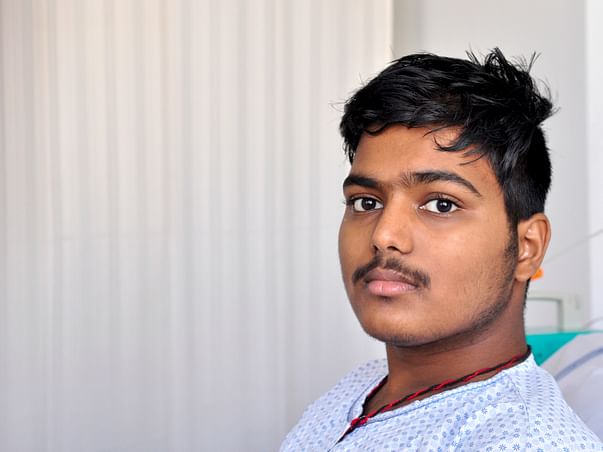 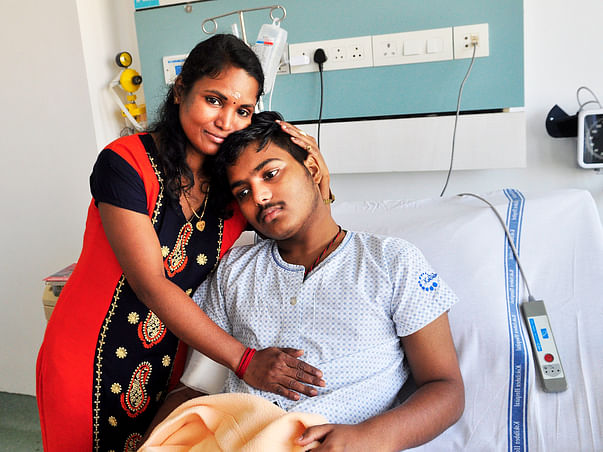 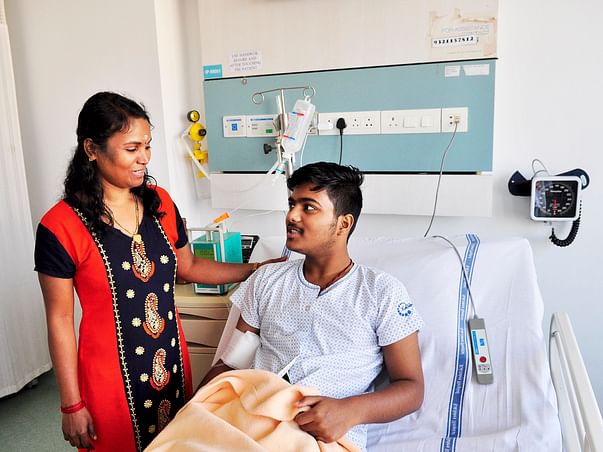 Previous Next
I wonder how I survived when my only son Navin was diagnosed with deadly cancer. We didn't have any choice but to fight it. My son fought it like a hero. It felt like a rebirth. Little did we know that the devil was hiding to attack again. Relapse is harder, I can't bear it. I felt suicidal a lot of time, but the thought that my son will be left alone stopped me. I live only for my son, losing him is losing myself.


Radha (Navin's mother) and Navin at the hospital

Two years back Navin had terrible leg pain. He had a high fever for weeks. His hemoglobin dropped to around 5.8 and I could see how pale and anemic he had become in just a few days. It was a horrible sight. When doctors told that Navin had acute myeloid leukemia, a deadly form of blood cancer, I didn’t speak to anyone for weeks. I just cried all day, all night. His condition became worse every day and the costs were rising exponentially, I couldn’t handle it.

I picked myself up and we did all we could to get him treated. We sold all we had and through friends, and family we spent around Rs. 11 lakhs. He went through 6 brutal months of intense chemo. His condition was critical, after every cycle, he needed  20-25 bags of platelets. We were finally relieved when he defeated cancer completely.

Our happiness was short -lived. We were slowly getting back to our normal life, he seemed to be fine. It was just 2 years, suddenly, the familiar symptoms occurred again and our nightmares began. Dreadful cancer has relapsed. I was devastated beyond words, I became numb. I could hardly eat or sleep. I lost 6 kilos in 2 months. It’s so hard for me to watch him suffer all over again. Now, he’s undergoing chemo but he also has an extremely high fever, gets loose motions and he’s unable to even walk without support. He takes 15 tablets a day but they're not enough.

My son is a strong person. He’s in the 10th grade and his final exams were in March (2018). He knew that he had relapsed but in the mornings, he’d still go to school, write his exam, go to the hospital and get his treatment. That’s his dedication towards school because he loves studying, drawing and singing and he gets to do all of that in school. He hates to see anyone cry around him. He tells me, ‘If you cry, I won’t take any medications or undergo any treatments from now on.’

Now, his only option is to have an urgent bone marrow transplant.My husband Shreedhar is going to be the donor but this surgery is so expensive. He works as a waiter in a hotel and earns around Rs. 12,000 every month. I used to work as a receptionist but Navin was so sick in 2016 that I had to quit and look after him. His father quit for a while too. Those days were so hard for us and it seems like the world has come crashing down once again.

Now, times are so tough that we can't afford to pay rent. Just the first 3 weeks of the hospital have cost around Rs. 13 lakhs. My brother sold off some of his property and we’ve given a deposit of Rs. 4 lakhs. My friends and family are helping me but the transplant costs around Rs. 30 lakhs and we have absolutely nothing.

If he doesn’t undergo the transplant in time, my nightmares will come true, and I can't bear to lose my only son. He deserves a life.

Radha is desperate to save her 15-year-old son, Navin, who has relapsed after fighting so hard to defeat a deadly form of blood cancer. His condition is so critical that he needs a bone marrow transplant immediately. Radha and her husband need your support to save their son.

This is doctor estimate cost Pls help me my son treatment

Ask for an update
Navin is admitted  now for gut stomach GVHD,  for last 1 month still date he couldnt recover properly,  he got loosemotion  per day 20 to 22 times,  and vomiting  fever also still he is in hospitalized,  continue  his antibiotics  and. Steroids ... Please support  my son once again.. Need finacial help.. Please help my son once again
This is Navin's mummy,  Navin is again admitted  bz of viral fever and heat boil, please once again help my child treatment  and Pls donate my son our pending bill is total 5lac and he admitted  again so we want finacial help Pls help help for my son
Navin is admitted again kokilabhen hospital,  because of GVHD (Graft virus host disease)  and fever also.  Please helpmy son treatment and please pray for him
Load more
Donate

Scan & donate with any app
check_circle_outline Download payment receipt
Report fundraiser
Know someone in need of funds for a medical emergency? Refer to us
Rs.146,285 raised

Donated to this campaign via Bank transfer/QR Code? Click here if you can’t find your donation listed below.
A
Anonymous donated Rs.250

All the best bro

Donated to this campaign via Bank transfer/QR Code? Click here if you can’t find your donation listed below.
A
Anonymous donated Rs.250

All the best bro

You are sending a message to
Radha Shridhar naik
Go back 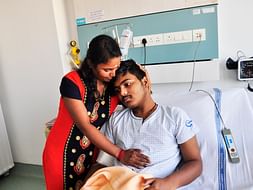 Navin Fought Cancer Like A Hero, Now Relapse Is Threatening His Life