My Son Has A Fatal Disease That Does Not Even Let Him Eat | Milaap
Milaap will not charge any fee on your donation to this campaign. 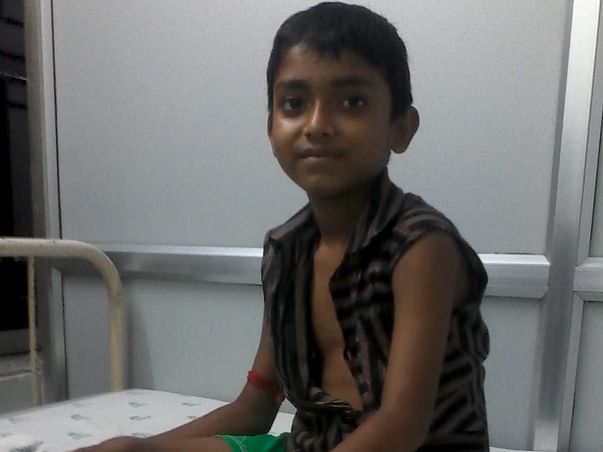 At an age when he should be in school with kids his age, 12-year-old Sagnik Hazara spends most of his time in a hospital in Chennai, waiting for his family to save him. Sagnik has Crohn's disease and requires long-term treatment to stay alive. His family, however, is very poor and is struggling to arrange the funds required to save their only child's life.

Sagnik's Appetite Has Taken A Hit, Leaving Him Weak

Sagnik's ordeal started three years back when he complained of frequent bouts of stabbing pain in his stomach. Crohn's disease affects the intestines thereby hampering his digestive system. Apart from the severe pain that he goes through on a daily basis, his appetite has also taken a backseat.

"He is terribly weak at the moment. Most days, he's hardly able to eat anything solid. Most of the time he is angry and frustrated at the pain of it all, and we can't blame him. It's painful, even for us, to just stand there and watch him suffer as such. He wants to be a normal child, but such is his fate that he cannot be that as well", says his father, Sapwan Hazra.

"A Random Stranger Helped Me While I Was Scouring Hospitals"

Sagnik and his parents are from West Bengal. After struggling for past three years to get a cure for their child's never-ending health woes, they decided to bring him to Chennai for better treatment.

"Back home, the doctors even performed a surgery to help Sagnik get better.  Naturally, they failed. The diagnosis was far off from the problem and if anything, it only maximized his pain.  By now, we have given up on all the doctors there. We brought him to Chennai. While walking the streets there -- destitute and hopeless -- we stopped by a shop. The gentlemen there is nothing less than a god for me. He told about this child trust hospital few km away from Chennai. I took my son there, and finally, a correct diagnosis was made" recalls Sapwan.

After performing preliminary tests, Sagnik was put on steroids. Seeing no visible change in his condition, it was then decided to put him up for biological therapy. It is 2-3 years long treatment, depending upon Sagnik's response to it. As of now, biological therapy is Sagnik's best shot at surviving.

A Long Fight Ahead

Sagnik's severe health condition has affected the future of his entire family. His parents, in a bid to bring their child out of this tragic fate, has already sold off everything of worth to them. The only thing left their name is the house in which they live, which they have mortgaged to a bank for availing a loan.

"I am scared that eventually we will be forced out of the house to dwell on the streets. How am I supposed to take care of my child then? He needs a roof over his head, but with dwindling financial condition of his father, even that prospects seem too far-fetched to imagine", says Sapwan.

Sapwan is a para-teacher in a private school and barely makes anything per month. He has exhausted whatever savings he has had in past three years. As of now, to ensure Sagnik's survival, he is to undergo a form of treatment known as biological therapy, the estimated cost of which is Rs 5 lakhs. The family has no means left to arrange for the funds required.

Sagnik is 12-year-old and has his entire life in front of him. His disease has taken away his chance at normal childhood. He is suffering every day and even a small contribution from your side can help him fight the pain. 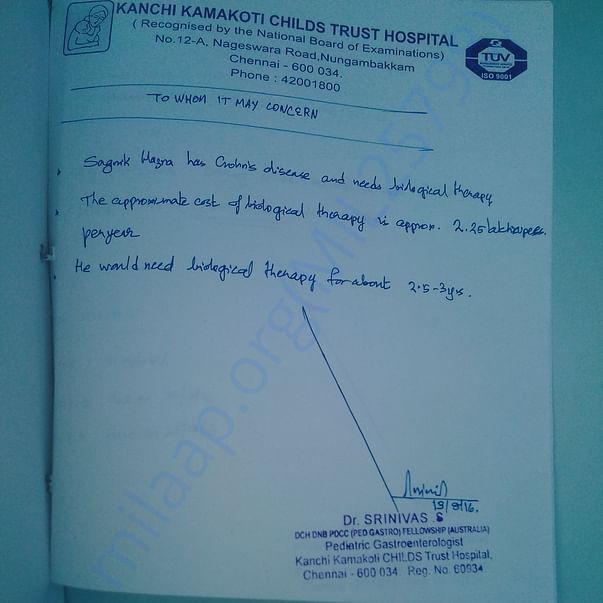 You are sending a message to
Swapan Hazra
Go back 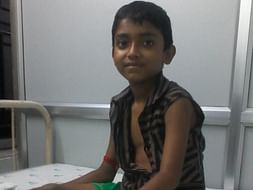