Even Going To School Is Dangerous For This Teenager | Milaap

Even Going To School Is Dangerous For This Teenager 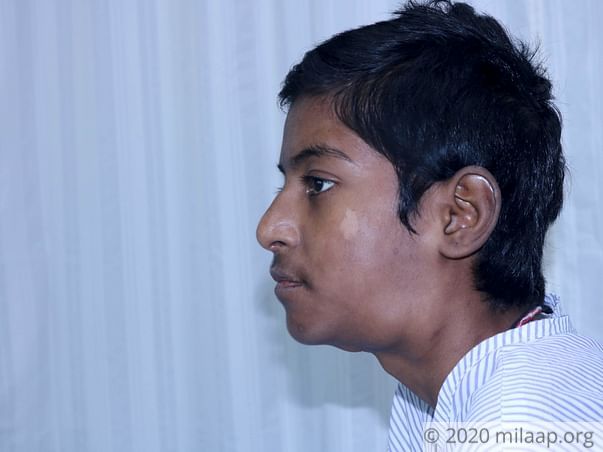 When other children his age were out playing, Nagendra couldn’t leave his house. For 10 years, he’s been living with a disease that has made his immune system so weak that even going to school became dangerous for him. Nagendra learnt to live with it, but one month ago he was diagnosed with blood cancer. Now he’s living with two dangerous diseases that can kill him.

“He can hardly sit up for an hour now. He’s lost 8 kgs in just 15 days, and has painful lumps all over his neck. Now even the air he breathes can deteriorate his health. We have to be very cautious now.” – Bhargavi

Chemotherapy is killing his immunity, but it’s the only thing that can save him

Nagendra (15) has always been a sickly child. It was only when he was 5-years-old did his parents, Bhargavi and Shekhar, find out why – he has Wiskott-Aldrich syndrome due to which his immunity system cells were nonfunctional. This meant he missed many days of school because of infections and needs injections every 20 days to stay healthy. His immunity is so weak that he could hardly fight against small infections, let alone the cancer cells.

“He started chemotherapy. It’s making him weaker and he has infections every other day, but it’s the only thing that can save him from blood cancer. He has no other option.” - Bhargavi

Bhargavi and Shekhar have been struggling for 10 years to keep their son alive. Shekhar had to quit his job at a private company a few years ago because of Negandra’s frequent hospitalizations. He then opened a small mobile accessories shop in Bangalore. He earns Rs. 10,000 per month. Bhargavi also had to quit her job in just 6 months because of his illness. She hasn’t worked in 3 years. They have spent nearly 30 lakhs on his treatment so far by selling the property they owned, taking loans and selling their jewellery. Now, they have nothing left for his cancer treatment.


“We had to take another loan and spent 5 lakhs last month on the tests and chemo. His health and our finances are all we’ve ever focused on all these years. I wasn't even able to give my older daughter the attention she needed growing up because of all this. It has consumed our lives, and now our difficulties have only increased.” – Bhargavi

Nagendra’s condition is critical, he needs your help

Nagendra is now in class 10. While everyone else in his class is writing their board exams, he’s in the hospital getting chemotherapy. He needs it for another 6 months to fight cancer. Shekhar and Bhargavi are devastated, to say the least - Nagendra’s condition is critical and they can't save him. He needs your help to survive. 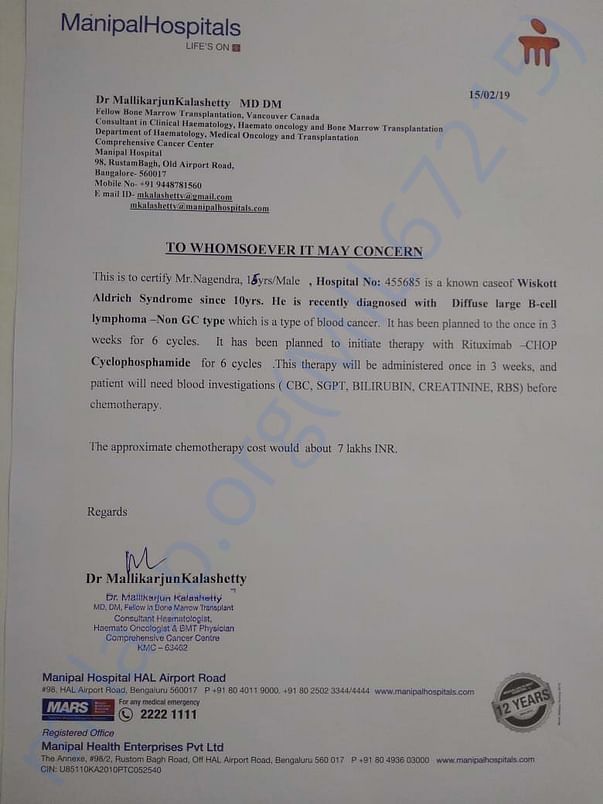 Nagendra has been admitted under Dr. Mallikarjun Kalashetty, for PRBC & SDP trasnfusion in view of anemia and thrombocytopenia. He has been responding well. He is being discharged in clinically stable condition and will be followed up on OPD basis.

Scan & donate with any app
check_circle_outline Download payment receipt
Report fundraiser
Know someone in need of funds for a medical emergency? Refer to us
Rs.49,250 raised

Donated to this campaign via Bank transfer/QR Code? Click here if you can’t find your donation listed below.
N
Neena donated Rs.1,000

God is will restore life back to you

Donated to this campaign via Bank transfer/QR Code? Click here if you can’t find your donation listed below.
N
Neena donated Rs.1,000

God is will restore life back to you 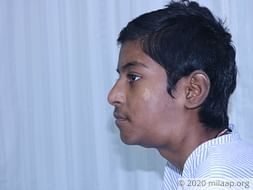 Even Going To School Is Dangerous For This Teenager