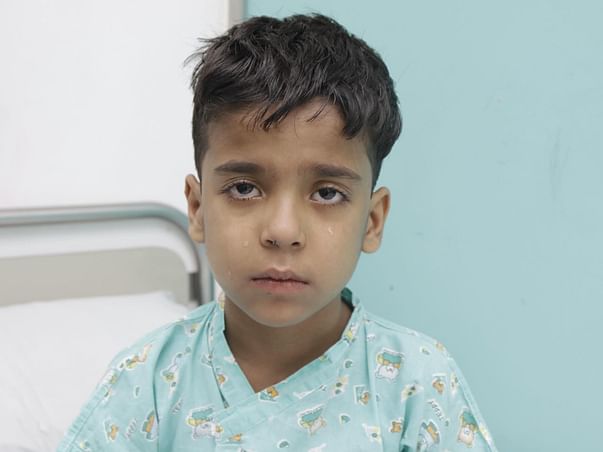 “If anyone ever asked Vidhan what he wanted to be when he grew up, he would shout ‘Pilot’ without missing a beat. He loves airplanes so much that every time he heard one flying over our home, he would run out to see it. But now, even when I point to a plane flying in the distance, he cries saying ‘Mama, I can’t see it!’. My son can’t even see the one thing he loves so much and it breaks my heart”
- Roshni, mother

His skin was littered with dark red spots

It all started when 7-year-old Vidhan ran a high and recurring fever in April, earlier this year. His skin was also littered with dark red spots all over, which would disappear with oil massages but return only days later. On consulting a local doctor, they were told it could be serious, and they wasted no time in heeding to his advice. They approached a bigger hospital, where Vidhan underwent several tests to find out the cause of his pain and discomfort.

“They told us his blood count was low - his white blood cells (WBC) had reduced and so had his platelets. I didn’t know what that meant, and I prayed it wasn’t anything life threatening. But then they told us he had a rare and dangerous blood disorder and if he doesn’t get treated for it, we could lose him...” - Pradeep, father.

Vidhan was diagnosed with a blood disorder called Severe Aplastic Anaemia. His body has stopped producing enough new blood cells as a result of bone marrow damage. Pradeep couldn’t fathom what he had heard, yet he was hopeful because his son’s ailment had a cure.

But when he realized the steep price that came with it, he felt his heart fall. It was a lot of money - money that he didn’t have and despite that, he somehow managed to pay for Vidhan’s initial chemotherapy. Gradually the young boy’s condition started to improve. Until a month later he started complaining of a headache and body pains and the spotting on his skin returned.

“We immediately rushed him to the hospital. He realised where we were and said to me ‘Papa, I thought we would never have to come back here.’ As soon as he said that he fell unconscious, and only woke up two days later. Every second of those two days was hell. Waiting for him to open his eyes was so agonizing. My wife and I had never known such fear, until then.”

His condition has worsened, he needs a bone marrow transplant

From then on Vidhan’s health continued to deteriorate. He had a fungal infection that needed immediate medical attention. He also had blood clots in his eyes that have affected his vision and he is unable to see faraway objects. Now, Vidhan’s only option at recovery is a bone marrow transplant and he needs it as soon as possible. But Pradeep is in a difficult predicament.

Vidhan with his younger brother, who is a special needs child.
A teacher by profession, Pradeep has been out of a job since the onset of the pandemic. With no proper source of income, he was struggling to make ends meet and now his son’s medical bills are piling up and he doesn’t know how he will afford it. He has spent everything he had, even mortgaged a small piece of land he owned and borrowed from family and friends, but it's still nowhere close to the INR 24.5 lakh that he needs for his son’s further treatment.

“I just want Vidhan to be healthy again. The only thing he has ever asked from me is a bicycle and I worked hard to buy him one. He had a radiant smile on his face the day he got to ride it. I wish to see him like that again, riding his cycle happily. I also have to take care of my younger son, who is a special needs child and requires a lot of our time and attention. It has been so difficult, and all this time I have been struggling on my own.”

Pradeep and Roshni can never live with the guilt of not being able to save their precious son. They hope that you can help him with your generosity and contribute whatever you can, so Vidhan can get the bone marrow transplant he needs.