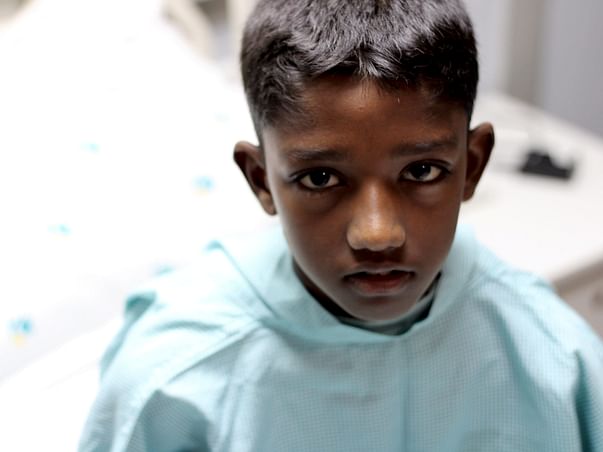 Right from the moment he came into this world, Ajay has been struggling to survive. He was diagnosed with a rare heart disease when he was 3-month-old, and had been breathing with difficulty ever since. Things got worse when his father left for another woman, leaving his mother, Sudha to take care of her two children - Ajay (12) and his younger brother Sanjay (10) by herself. She supported the family by working in a bangle factory. Ajay and Sudha supported each other ever since and found joy in little things.  And for Ajay, his mother is the first to know about every little achievement of his.  But everything changed when his condition worsened and left Sudha in utter despair.

Ajay was 3-months-old when he was diagnosed with Mitral Regurgitation(MR), a rare heart disease because of which the blood pumped into his body is reduced, leading to abnormally low oxygen levels in the body. Doctors gave him medicines and told his mother that he will get better with time. For a few years, Ajay was alright but he started becoming weak and breathless when he turned 6. He was in and out of hospitals for a whole year, during which he could not go to school as well. A few tests confirmed that his heart was weak, and he needed surgery at the earliest.


“Life was never that easy for Ajay. I had always strived to provide both my sons with a good life despite my struggles. When I saw Ajay becoming breathless and gasping for air every now and then, I prayed nothing serious should happen to him. When the doctors said that he would not be alright without a surgery, I immediately begged everyone I know to help me. Finally he was able to undergo the surgery - I believed he would be fine soon, but sadly that's not what happened."

5 years after his unsuccessful surgery, Ajay is struggling to live. He gets severe headaches every now and then and every time this happens,  he holds his head and cries. He gets stomach pain right after he eats food, so he eats very little. Now he is bedridden as the pain in his legs does not allow him to sit or walk. Now, only an open-heart surgery can save him, but Sudha can’t afford it.


Ajay before his heart condition worsened

“ I made every effort to make sure that Ajay gets to live a healthy life. But now he’s getting even worse. Despite his breathing problems, he used to actively participate in sports and games at school. With each day, he is growing weaker and more tired. Ajay is my strength and support and just the thought of losing him breaks my heart.”

Despite difficult hardships, Sudha is determined to save her son from this fatal disease on her own

Sudha was abandoned by her husband when Ajay was 5-years-old and was left with the sole responsibility of taking care of both of their sons. Yet it didn't dampen her spirits as Ajay has always been her strength and support. Despite all the difficulties she faced, she single-handedly took care of her family and always strived to provide the best to her children.


“I always worked hard to give my children whatever they wanted. But now I can’t even give Ajay a healthy life. He is very passionate about running and actively participates in every sport at his school. He talks about buying new shoes once he gets well so that he could go for running practice. But now I don’t even have money to look after his treatment expenses. But i am determined to go to any extent to try and save him - I will beg and fall at people's feet to help save him. I cannot imagine a life without my son.”

Amudha Sudha is a single mother and is the sole breadwinner of the family. She works in a bangle factory, earning 6000 Rs per month. She does not have anybody except her two children now as her parents and in-laws passed away a few years back.

“At the time of Ajay’s surgery, I could manage to look after the expenses as some kind people donated funds. With the meagre income I get, it’s been difficult to take care of both of my sons. Now, I have a standing debt of one lakh and I have no savings left to pay the debt as well as look after the surgery expenses. Ajay is my support and it is his smiling face that gives me the strength to face each day."

Ajay is suffering from Mitral Regurgitation, a severe heart disease, and  needs to undergo open heart surgery for mitral valve replacement. The more the surgery time is delayed, his chances of survival will decrease. Ajay’s mother is in huge debt and is in short of money to look after the expenses of the surgery. She needs your kind contribution to help her son survive. 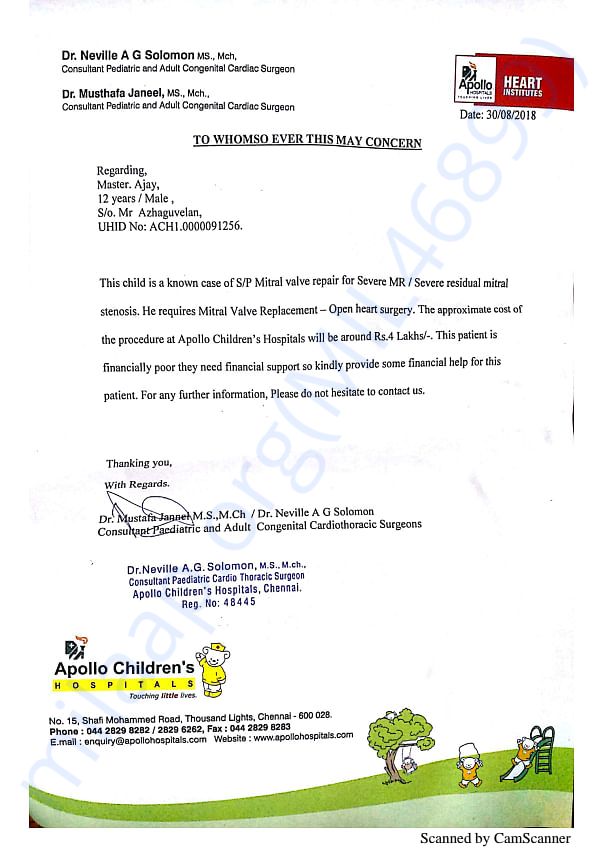 Scan & donate with any app
check_circle_outline Download payment receipt
Report fundraiser
Know someone in need of funds for a medical emergency? Refer to us
Rs.156,786 raised

God bless you my child. May you recover fully.

God bless you my child. May you recover fully. 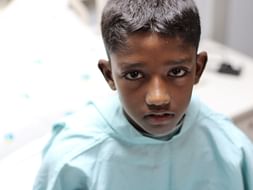