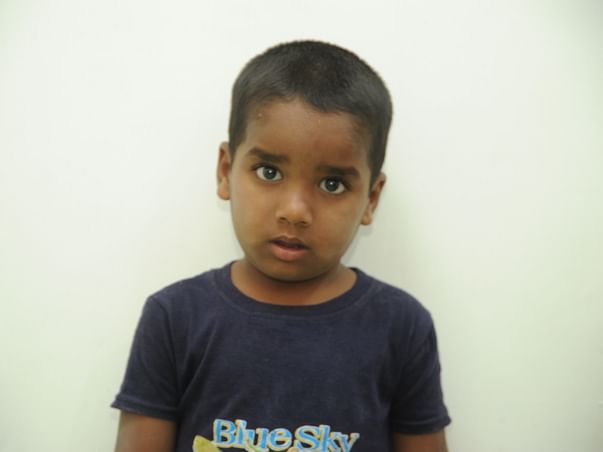 The good neighbour : This IT professional in Hyderabad raised over Rs 6 lakhs so his neighbour's son can hear for the very first time. He needs only Rs 2 lakhs more.
Imran is the local alarm clock who wakes up his neighbours with his loud screams early in the morning. Small babies crying is nothing unusual but Imran is five now, and capable of very loud screams.
Most neighbours ignore him. He is from the poor household that 'can't-control-the-children”. But one neighbour decided to walk up to Imran's house and ask them why their child screamed every day. Sasidhar, a senior IT professional who lives in the next house decided to meet them and find out if they needed some help.
Sasidhar in his office in Hyderabad
“I went to their house and they told me that the boy had not yet started speaking. When I saw him – I realised that he responded only to the loudest sounds, startling if he went too close to them,” he says. Sasidhar realised the boy needed to see a doctor immediately.
Shamsuddin is a daily-wage worker who paints walls for a living. He has studied only till class 10. His wife Chotidi, never went to school. He earns about Rs 10,000 per month and pays a rent of Rs 3,000 for his one-room house. Priority is the children's education.
Imran with his parents and elder sister Habiba near their house
Even though Imran was five and was not speaking, the parents didn't want to believe that he could be deaf. They thought their son was merely late in picking up the language. Their elder daughter had also picked up speaking late- at 3. They don't have any money to get deafness treated.
“Both my husband's parents passed away long back. Only my mother is alive and she is also quite sick. There is no elder in the family who knows better and could have guided us or assured us it would be okay,” Chotidi explains.
Sasidhar, who has before been involved in helping people raise funds for medical needs, decided to help out the family. "I had helped a colleague fund his son's cochlear implant. Today, the boy is 4 and is completely fine. He even goes for music class. I have seen first-hand how this procedure can improve a person's life," he says.
Imran with his father
Sasidhar took them to Dr Vinay Reddy, a specialist in Apollo, Hyderabad. The doctor confirmed his suspicion, that Imran could not hear. But he also urgently needed a cochlear implant worth Rs 8 lakhs.
“The doctor said that Imran was deaf in both the ears and that there was otherwise nothing wrong with the boy physically. If he gets a cochlear implant, he can hear and talk normally,” explains Sasidhar.
The doctor also urged the family to get an implant at the earliest, because Imran was of the age when children rapidly pick up language. As it is, he manages to communicate all his needs through a combination of screams, gestures and signs.
Like any other parent, Shamsuddin and Chotidi want to give their child the best life he can have. They are pained that they can do nothing to help him deal with the world better and hear and speak normally. Sasidhar has given them hope that necessary treatment for their son can be arranged.
Sasidhar used his networks and applied in various charitable funds to collect 6 lakhs. A true good samaritan and a good neighbour, he has already raised 75% of the amount needed.
Sasidhar needs your support raising the last leg and helping little Imran hear his first sounds. Contribute now.