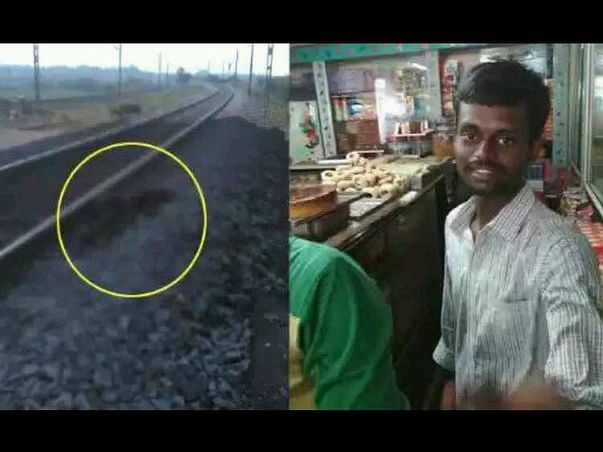 Share
The person in the below picture is Harish Doki. Harish is from a very poor family who is very ambitious, clever and hardworking person. He use to reside in a small town called Brahmanatarla in Srikakulam district, Andhra Pradesh, India. Harish completed his B.Com degree and used to prepare for competitive exams. He worked part timely to support his studies as a helper in a sweet shop in a town called Palasa. Harish use to commute from Brahmanatarla to Palasa each day for his job to support his father who sell papads on a cart. Though Harish is poor and needy, he never disappointed his family with his education. Harish is the only hope of his family.

Harish is leading happy life within his limitations. On 28th January when Harish was helping his owner in the sweet shop, one customer named Chakradhar Paila ( Counselor of Local government ) entered into the shop to buy some snacks. Chakradhar took a snack item with his unhygienic hand from the bunch to taste, where Harish asked Chakradhar to not to do it again. Once again the arrogant customer ( Chakradhar Paila ) did the same thing and Harish denied him. This time this notorious Chakradhar started yelling, dragged Harish out of the shop and started showering the punches on his
face, saying “ How dare you to question me? I am the Counselor for this ward “. Chakradhar was lost control on his mind, he felt that like an insult when Harish was trying to stop him not to do that again and again.. finally he dragged Harish as if he was doing that with an animal. He pulled Harish out of the shop and just started slapping and hurting him like anything. Harish and the shopkeeper felt it very inhuman and decided to file a complaint against him, who knows this idea is going to change Harish and his family's life. Finally, they reached and filed a case against Chakradhar ( counselor) then the police man decided not to punish the councillor because of his political background and just made both of them to calm down, with mutual understanding. Both the parties agreed infront of the police man. What to do!! The councillor was lost control completely this time. Even after the settlement Chakradhar (counselor) decided to hurt Harish again. With the help of his followers again he attacked Harish. On the same night Harish didn't returned his home, Harish's father was bit frightened this time and slept in a thought that his son will reach home by tomorrow's morning. Harish found dead on railway track the very next day. Many people believe that Harish was murdered by the counselor while others believe he suicides because of the insult he face as he is a graduate. God know what happened on that mysterious night.

Now this is the high time to rise our voices against these kind of attacks on common people. Let us all be united and help each other. I believe we all can help Harish’s family atleast. It is the time to support both morally and financially to his family.
( Harish is completely unknown person to me but I took initiation to help his family. I spoke with his family and conveyed my condolences to their family. I took the permission of their family and raising funds on behalf of them. Let us show the nation that we are united.)
#PleaseShareThisPostAlongWithYourDonation
#LetUsSpreadThisNews
#Harish family’s contact: Venkatrao Doki
Ph.no: +917382378376