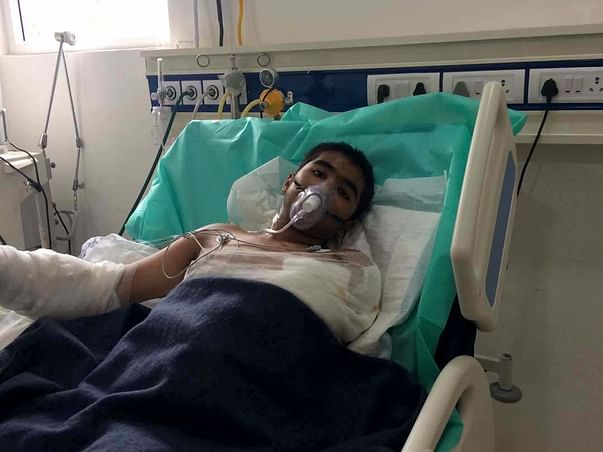 Cavin is a 15-year-old who suffered severe burns from high-voltage electrical wires near his house. He has suffered severe burns on his left side and his left hand needed to be amputated and his right hand is damaged as well. He needs to be in the ICU for another month. His mother, Vidya is a tuition teacher and cannot afford the treatment needed to help her only child.

“Cavin and his friends were excited about board exams. They were making all kinds of study plans. Now, he doesn't have a hand and I spent the last four nights listening to him moaning in pain – calling for me, asking me to take away his pain. The doctor says he might lose his other too,” says Vidya with a break in her voice.Her 15-year-old son is the centre of Vidya's life. Cavin is the reason she was able to put her life back after her divorce and seek happiness. She got a job in a five-star hotel and earned Rs 11,000 per month – allowing her to rebuild a life of dignity for herself and her son.

This year, Cavin was to give his class 10 board exam and Vidya decided he needed her around more to do his best. She quit her job and took up data entry and evening tuitions to stay at home. Now, Vidya keeps going over the event in her mind – looking back at how it happened and what could be done.

Cavin was hurt by fire and electricity from the high-tension wires near his balcony. Vidya was aware that the wires were a hazard and had even complained to the authorities about the danger it posed to the community. Her complaints fell on deaf years, and Vidya feels that Cavin paid the price.

“He came back from school, freshened up and went out in the balcony. The wires exploded like crackers and then there was the fire. Cavin was just 2 feet away from it,” she recalls. Through her sorrow for Cavin's condition, Vidya is determined to make a formal complaint so no one else suffers like her son.
Cavin has a whole life ahead of him
After this event – the whole area near our house seems empty. The places where Cavin played with his friends are all empty. In school, he won prizes for kabaddi, relay and football. Next month is his birthday – he is just 15,” at which point Vidya is unable to go on.
It is very difficult for Vidya to see her laughing, happy son in the burnt, pained person in the hospital. As his mother, she needs to listen to her son calling for her – asking her why does it hurt so much. Cavin has not yet had the time to come to terms with his amputation and already may need to undergo another one. Vidya fears for her son's future.

Cavin needs extensive surgeries to get back a shadow of his former life. He also needs to be in the ICU for a month because his injuries are a result of electrical fire. The treatment is expensive and nothing prepared Vidya for the expenses involved. She has so far borrowed from her friends and paid Rs 70,000, but she has outstanding bills of over 2 lakhs. She will need 13 lakhs for the entire treatment.

Help Vidya save her son and give him the treatment he needs to recover from this horrendous experience. Contribute now.
Supporting Document 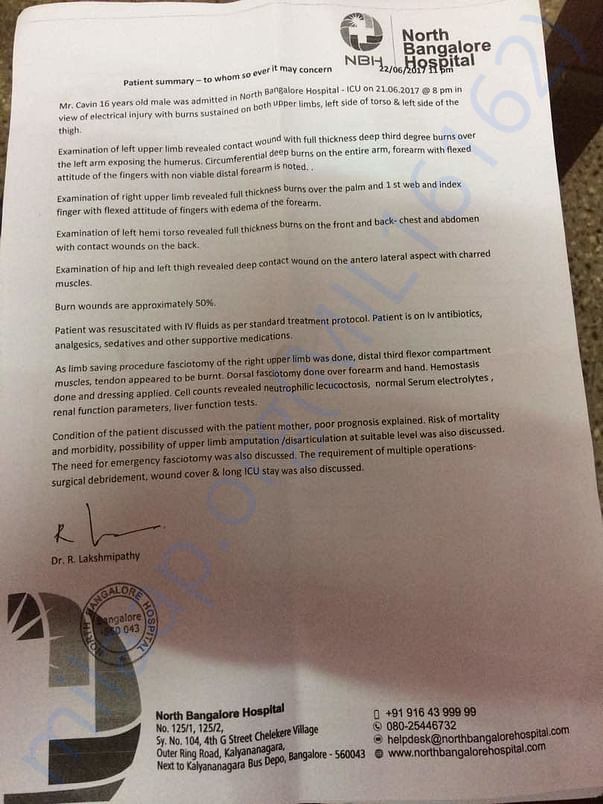 It gives me immense pleasure in informing you all that Cavin is now doing well. Thank you so very much for helping the family with the expenses and helping them give Cavin the right treatment.

This couldn't have been possible without you. Please see the recent photographs of Cavin.

Cavin is discharged from the hospital and now he is at home. Cavin and his mom Vidya thank you all for all your prayers and support.

Thank you once again.
Dear Supporters,

We have exciting news to share with you today. Cavin is doing well and is on the road to recovery. Currently, he is out of the ICU. He was shifted to the ward on the 5th of August.
He is able to sit without support now. He is still unable to stand without support for long. As per the doctor's advice, he is undertaking physiotherapy.  At present, he can stand for two minutes without any support but then the pain from the wound on his left thigh is just unbearable. That wound has to heal and then he will be able to walk.

The doctors suggest that he must be under observation until the wounds heal and he is able to walk.

Thank you for the overwhelming love and support. Cavin & Vidya are really grateful for the support. Please do pray for his quick recovery.

May the Almighty in his incredible power and wisdom haul him out of this situation and grand an amazing future and a living testimony.

May the Almighty in his incredible power and wisdom haul him out of this situation and grand an amazing future and a living testimony.

a
You are sending a message to
akumar.shakya
Go back 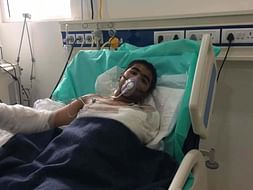