Help Blesson To Fight Traumatic Brain Injury and be a living testimony | Milaap
This is a supporting campaign. Contributions made to this campaign will go towards the main campaign. 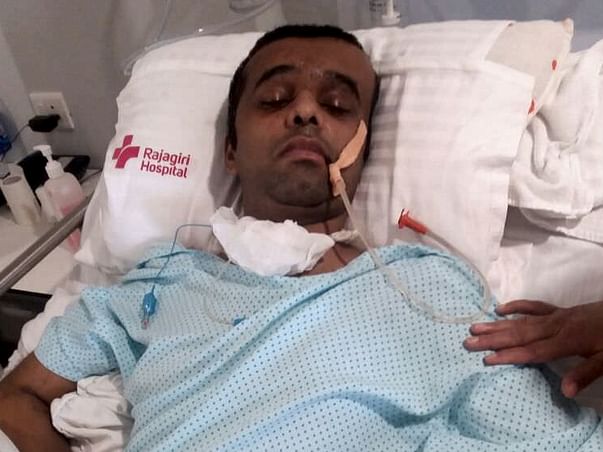 This young, lively lad you see in the picture is Mr. Blesson Varghese - a very humble, God fearing chap, full of dreams, exuding confidence in all his endeavours.  Skilled at playing the keyboard, football and cooking, he was a perfect combination of brains with talents. He was an active member in church too and always won prizes for singing and memorizing bible verses. All throughout his school and college days he was the academic topper.
As implausible as it may seem, at present he has been reduced to a vegetative state, confined to a bed within the four walls of a room at Rajagiri Hospital, Aluva. The fateful night of September 21st, 2017, turned his world upside down.  While returning by car with his friends after bagging the first prize in an inter-collegiate competition held at Kozhikode, his car hit a truck, killing two of his friends on the spot, leaving one with a few fractures and him in this stage. Details of the accident is given in the links below
http://english.manoramaonline.com/news/kerala/2017/09/22/kochi-mba-students-killed-chalakudy-accident.html
http://www.thehindu.com/todays-paper/tp-national/tp-kerala/2-students-killed-in-accident/article19732474.ece
Below is a briefing regarding Blesson and his family
Following his B.E in Mechanical Engineering, Blesson moved to Saudi to work for about 2 years and support his parents financially. His sister Nissy got married in 2012 and moved to Delhi with her husband and worked as a Nursing Lecturer there. His parents returned to Kerala for good in 2015 after retirement. His father’s search for a job in Kerala to pay off the loan proved futile. They lived a very simple life with their minimal savings. The loan was paid off slowly by the year 2016, with his savings and Blesson’s salary while he was employed at Saudi. Blesson returned to Kerala in December 2016, with a passion to pursue MBA.  After passing the qualifying exams for MBA he chose RAJAGIRI COLLEGE KOCHI for his Master’s Degree due to its proximity to his home. Due to financial constraints Blesson took loan for his MBA which he had planned to pay off after getting employed.
His classes had commenced only in June 2017. He was also part of the recruiting team in Rajagiri College.
Four months into the course and this life changing accident. His parents haven’t returned home from hospital ever since the day of the accident. With the increasing expenses, the family has no option to pay off the bills incurred. TILL NOW EXPENSES HAVE COME TO 15 LAKHS. The family is living with the hope that Blesson will return to normal life. However, this would require treatment and rehabilitation. But for how long? We have no clue. He is a real gem. None of his friends, relatives or acquaintances have a negative word about him. Many of his college friends told his sister that nothing would happen to Blesson and that he would come out safe because he was the only one who read the Bible, preached the same to his friends and prayed.
Nissy is awaiting the arrival of her first child (due in January 2018) after waiting and praying for 5 long years. The family was so looking forward to seeing their prayers answered with the arrival of the baby. However, this joyous anticipation has turned into a painstaking arduous journey for her as well, as she awaits at her home at Kerala, devoid of her parents and brother. Her mother-in-law passed away in January 2017, and at present her husband and father in law are the only ones for her support.
Funds raised here will be transferred to his brother in law (BIJU Varghese)'s account.

newspaper cutting of the accident on Sept 21 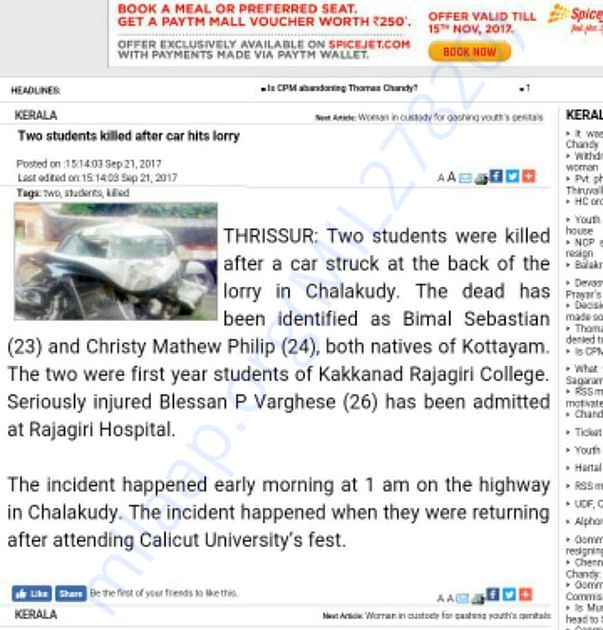 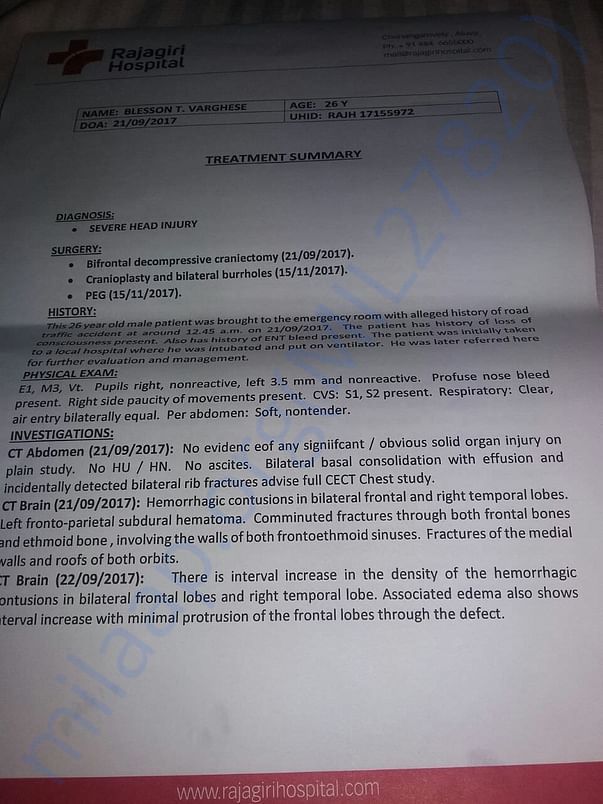 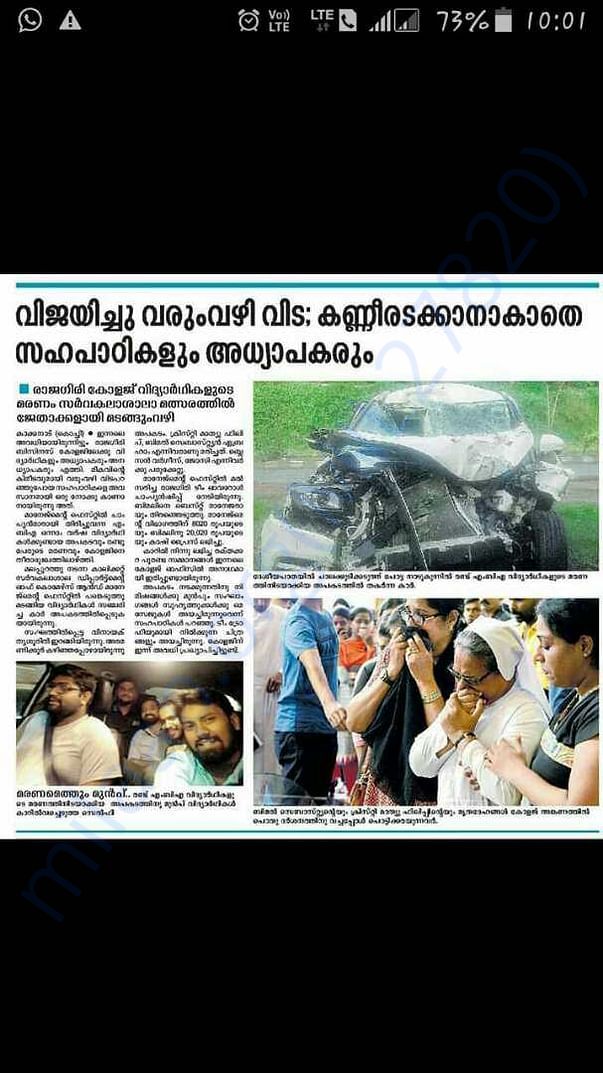 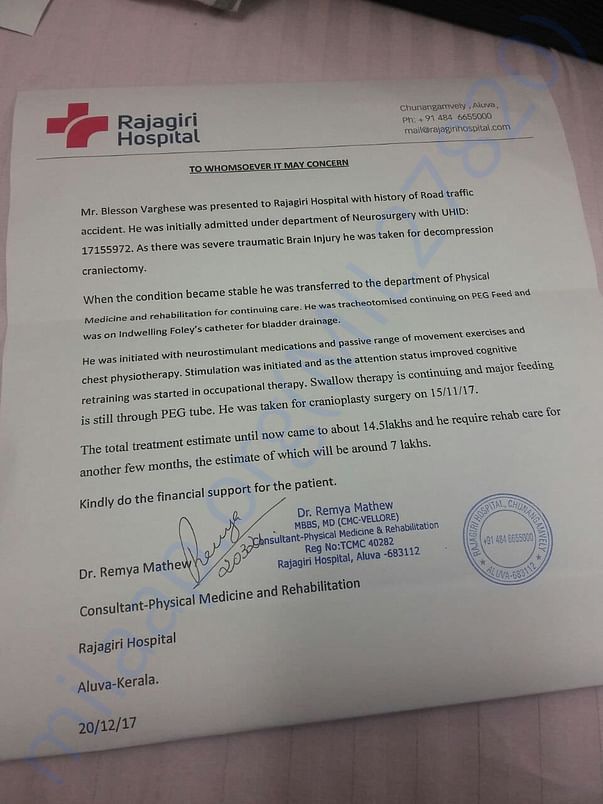 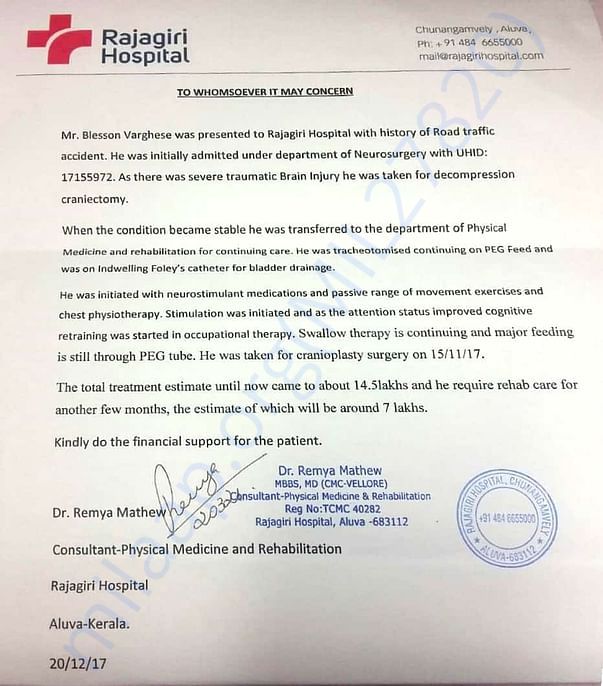 Blesson is currently at home and is doing well. We are all trying to help him with his memory loss. He is also being given physiotherapy treatment on a daily basis. Since it's a major head injury, it's taking him time to show considerable improvement in his health. The doctors have prescribed medicines and he will continue to be on medication until advised otherwise.

We are all hoping to see him recover. Please keep praying for him. Thank you once again!

I am one of his school friend from MREC. Though we were not in touch, it is really painful to see this. Hope you have all the strength needed at this hour to help Blesson recover.

I am one of his school friend from MREC. Though we were not in touch, it is really painful to see this. Hope you have all the strength needed at this hour to help Blesson recover.

b
You are sending a message to
bijuvarghese123
Go back 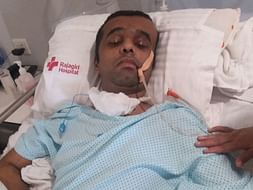