Krishnaveni’s day begins at the break of dawn, and she wakes up with only one thought on her mind – whether her 4-month-old will make it through one more painful day. As she quietly watches over her sleeping baby, she says a little prayer to God, asking Him to keep her little one at peace for a little longer. However, the very next minute, her baby’s breath begins to get shallow. His eyes wide awake, he struggles to breathe and his face and lips turn blue. “Every time this happens, I think I’m going to lose him.” says Krishnaveni.

Krishnaveni and Nagaraju’s baby boy’s heart is failing. Every day that he goes without surgery, he’s being pushed towards his parents’ worst nightmare – losing him forever.

The couple eagerly waited for their baby’s arrival, little did they know that he would be born with deadly disease

During her pregnancy, Krishnaveni kept a little pocket calendar under her pillow on which she would cross off the days, counting down to her delivery. At night, when Nagaraju would sit at the table, correcting his students’ homework, she would often tell him that she couldn’t wait for their baby to start going to school and learning new things. Krishnaveni and Nagaraju had many dreams for their child, but unfortunately, their son was born fighting for his life.


“He couldn’t breathe on his own, and we were told that his heart was weak. He was in the ICU for ten days before I could see him for the first time. When we took him home, I knew this wasn’t the end of his fight.” - Kirshnaveni

Krishnaveni’s baby has a serious heart condition which causes oxygen from the lungs to be pumped back into the lungs, while the blood that lacks oxygen is pumped through the body. To correct this, their baby needs an urgent open-heart surgery. Krishnaveni and Nagaraju were asked to get the surgery done as soon as possible, but their dire lack of funds stood in their way. Now, their baby is running out of time. They need to save him before it’s too late.

Krishnaveni and Nagaraju need to take their baby to the hospital thrice a day to get him breathing treatment. Nagaraju, a mathematics teacher in a school in their hometown Kurampally, Telangana, has missed many days of work in the recent past because of his son’s failing health. With his income, he was able to support his family of four, but a surgery is beyond his means. He’s the sole breadwinner of the family and the couple are now struggling to save their baby.

“With each day, his breathing is getting worse. Every day we live in the fear that his heart will give up on him. We’ve had to postpone the surgery once already because of lack of money. This time, there’s no other way. He needs the surgery soon.” - Krishnaveni.

Krishnaveni and Nagaraju have sold even the little jewelry that they owned to try and get their baby treated, but it’s not enough. Their little one needs an open-heart surgery at the earliest to survive. He was born with the heart disease, and for four months now, he’s been suffering. Only you can help ease his pain and save him from his failing heart. 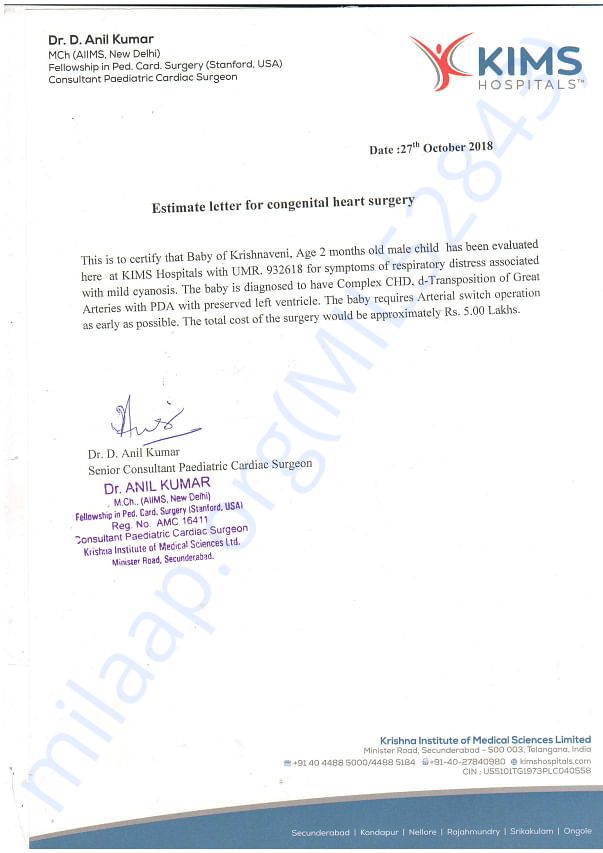 Scan & donate with any app
check_circle_outline Download payment receipt
Report fundraiser
Know someone in need of funds for a medical emergency? Refer to us
Rs.15,561 raised