Bangle Seller Needs Your Help To Save His Newborn Baby | Milaap
This campaign has stopped and can no longer accept donations.

Bangle Seller Needs Your Help To Save His Newborn Baby 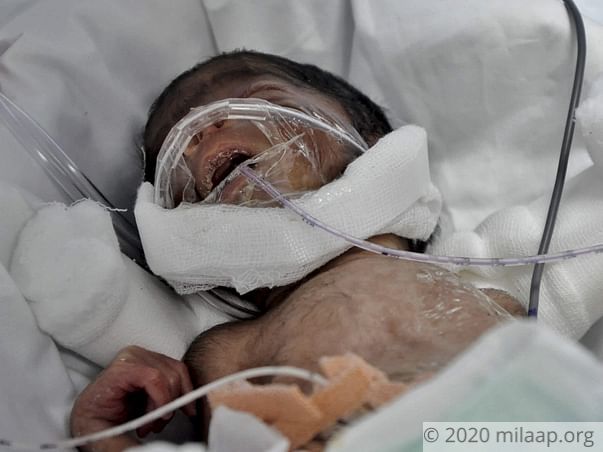 “We can save your wife but not your baby,” they told a frightened Siddaraja who was waiting outside the delivery room. Dakashayini was bleeding and the baby had to be delivered, even though it was just her 7th month of pregnancy. Siddaraja and Dakashayini had waited for this moment for 15 years, and when it did finally happen, it wasn’t a moment to celebrate. Yes, they were relieved that he was born alive, but underweight and in distress, he now has to fight to stay alive.

For 15 years, all Siddaraja and Dakashayini prayed for was a baby. They have gone to many doctors and hospitals over the years but no one could tell them what was wrong.

“We went to nearly all the hospital near our village in Chikkaballapur district. No one could tell us why. We’re not very educated and didn’t understand what was happening. All we ever wanted was a baby, we never imagined that this would be his fate.” - Siddaraja

Siddraja took Dakashayini to Bangalore a day before the unexpected delivery for her checkup owing to the pain in her stomach. On reaching the hospital, she was bleeding. Siddaraja and Dakashayini’s baby boy was born on February 3rd in a private hospital and transferred to Cloudnine, Bangalore. He has been in the NICU ever since owing to his low birthweight (1 kg) and underdeveloped lungs. He’s only 8-days-old. He needs to stay in the hospital for at least 4 weeks to get stronger.

Dakashayini is now recovering from the delivery at a relative’s house in Bangalore. She wants to see her baby every day, but on some days, she’s just too weak to leave the house. Siddaraja begins and ends his day by seeing his baby, whom he can’t hold or touch. He had taken Rs.10,000 with him - his life's savings. Now he has nothing left.

“I have a small bangle shop in our village. I’m not able to sell every day, when I do, I don’t earn more than Rs. 200. We have half an acre of land where we go grow corn, but the weather has not been in our favour. With no rain or water, our crops are failing.”

Under these circumstances, Siddaraja can’t afford to keep his baby in the NICU any longer. Stopping the little one’s treatment would mean losing him forever. They need your help to save their only child. 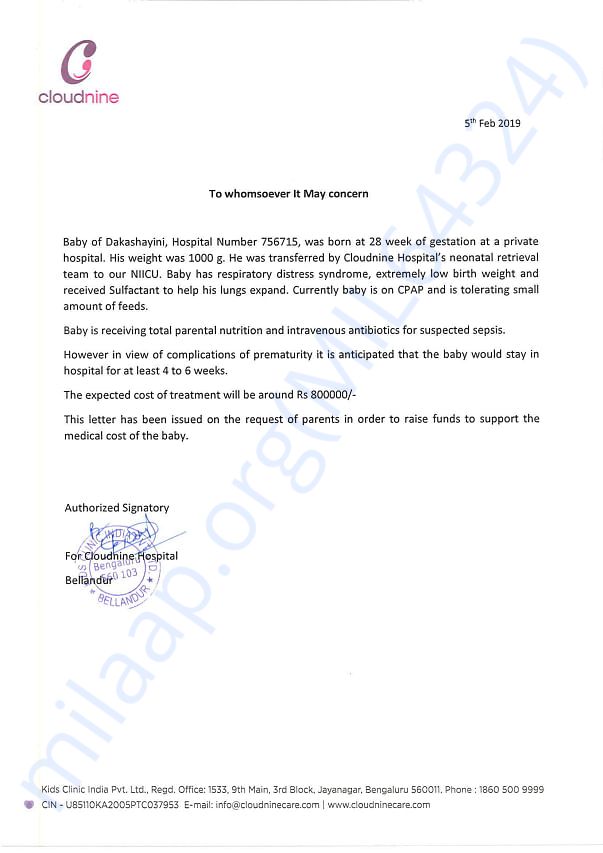 Thank you all for your immense love and support shown towards our cause.

Thank you all! Please continue to share the campaign and help us raise more funds.

Scan & donate with any app
check_circle_outline Download payment receipt
Report fundraiser
Know someone in need of funds for a medical emergency? Refer to us
Rs.457,632 raised

Get well soon, may god bless you

God is with you , have faith. Everything will be normal.

Get well soon, may god bless you

God is with you , have faith. Everything will be normal. 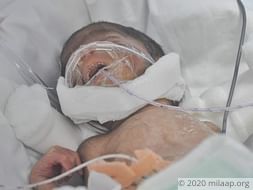 Bangle Seller Needs Your Help To Save His Newborn Baby