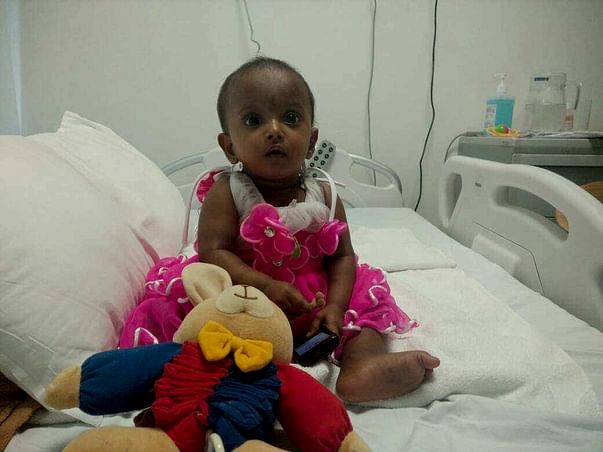 “It had hardly been 6 months since the birth of my first child that I performed his last rites. Even at that age he spent his last 4 days in the hospital before he left us. The incident left us paranoid. Every time my second child fell ill, we would rush him to the hospital praying it would not turn out to be a liver problem. When 2 years went by, and he remained healthy, we went for a third child. That is how Ananya came into this world. We were overjoyed to have a daughter. She is such a doll!” Ananya’s father Jitheesh says.

When their worst fears came true:

Ananya’s parents were happy to overcome their fears and move on to start a new, happy life with their family. Everything was beautiful for the first 5 months. During her 5th month, when Ananya’s mother was giving her a bath, she felt a hard, stiff lump on her stomach.
“It was like a déjà vu. That was the same age, the same symptom. I just knew it could not be the same ending,” Jitheesh sounds strong.

Keeping the little one alive:

Jitheesh is a lorry driver from Kottayam in Kerala. His income is generally enough to sustain his family, but not enough to have made any great savings for a medical crisis. He immediately took his baby to a hospital in Thiruvananthapuram, the best he could think of.
“Here, they provided free treatment for Cancer, but Liver problems were not covered. By the time we travelled to the hospital and completed the tests, the Rs. 4-5,000 we had brought with us got over. We had to return for a follow-up in a few days, but we only had enough money to return, and so we just did that.”
That time, a nearby mosque made an announcement about Ananya, and people came forward and contributed to help her. This was how Ananya survived a very critical stage. She was then referred to Aster Medicity, Kochi for an urgent liver transplant, the only way to keep her alive.
Why they need your help:
It has been 6 months now. Jitheesh has been by his baby, not leaving her side for even an hour. The family no longer has a source of income.
“An amount in lakhs is something I have not thought about even in my dreams. When I was told the cost of the surgery, my head started reeling. I really thought I would faint. I have no friends who would be rich enough to pool in that kind of money, I really have no way to get through this, but I have promised my baby I will not let anything happen to her.”
An act of kindness on your end could help this father keep his promise to save his daughter’s life. 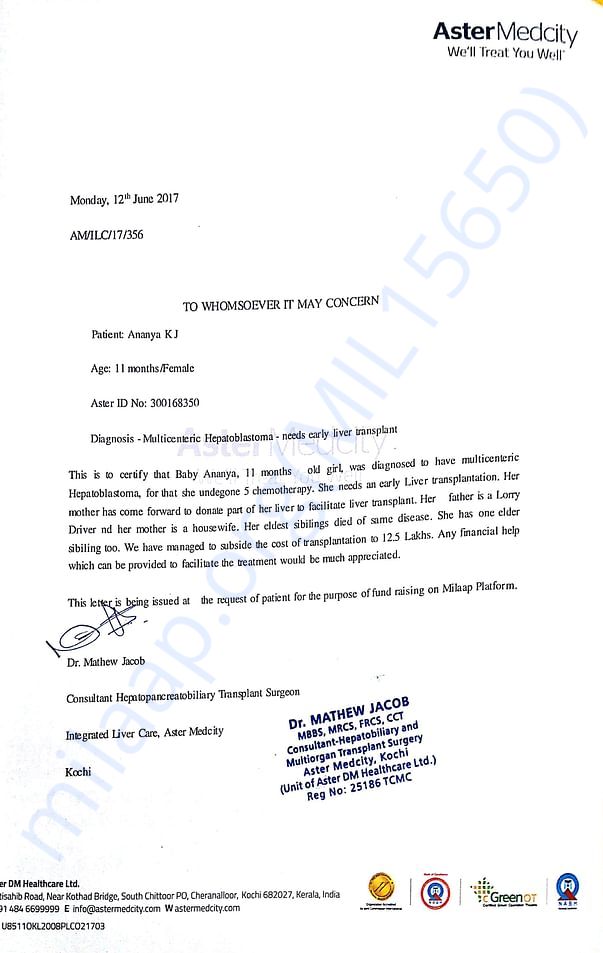 Thank you for the wonderful support that you have shown towards Ananya. She has completed the treatment and is doing good now. She comes to the hospital only for regular follow-ups.

Thank you all once again. Do pray for her health and speedy recovery.
Dear Supporters,

Thank you for all the wonderful support you have shown Ananya. She successfully underwent the liver transplant on 28th June. Her mother donated a part of her liver and she is also doing well.

Ananya developed a few complications and developed a tumor in her liver. She is currently being administered chemotherapy and is done with 2 cycles. She has no side effects and is responding well to the treatment.

Thank you for all the love and support. Please do pray for her health and speedy recovery. Will keep you posted.

Report fundraiser
See how thousands are crowdfunding for their causes on Milaap
Rs.616,338 raised

wish u all d best.

wish u all d best. 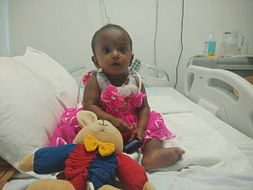