Extend your support for Amara to cure her critical pneumonia with PDA | Milaap
This campaign has stopped and can no longer accept donations.
Milaap will not charge any fee on your donation to this campaign. 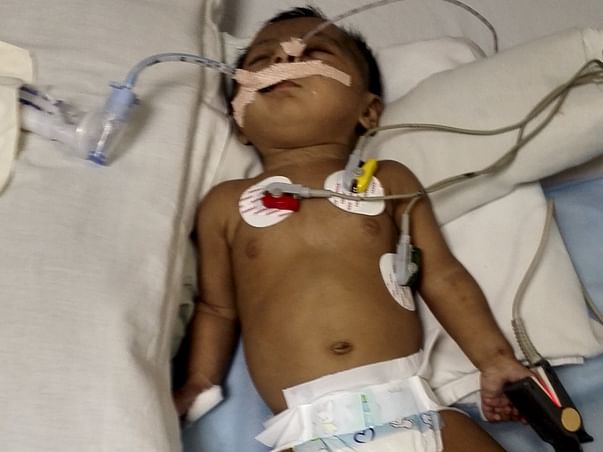 CHIEF COMPLAINTS:   This is a 5-month-old female child brought to the emergency department with chief complaints of cold and cough since morning and respiratory distress since morning.  Child had no fever spikes.  This child was last admitted in this hospital with similar complaints and is a known case of CHD (PDA+ small ASD) with FTT with right-sided inguinal hernia.  During her last admission, she was hospitalized for 10 days and was to advised to undergo PDA (Patent Ductus Arteriosus) ligation procedure with cardiologist.  Child had recurrent episodes of pneumonia and was hospitalized for 4 times for pneumonia treatment since birth.

INITIAL ASSESSMENT:  After initial intervention at Hope Children’s Hospital by the Pediatric Intensivist, child was in severe respiratory distress.  Her saturations were not maintaining in room air and the child required mechanical ventilation support.  Risks and associated complications were thoroughly explained to father in an understandable language that are included, but not limited to respiratory failure, sudden cardiac arrest, and need for bubble CPAP ventilator or even HFO ventilator.  A high‑risk consent was also obtained from both father and mother. It was also stated that the baby needs PICU stay of approximately 2 weeks with level II PICU care.
COURSE IN THE HOSPITAL: Child was immediately started on bubble CPAP at around 5:35 PM with PEEP at 6-cm and FiO2 at 61%, IV antibiotics, IV fluids, Nebulization with O2, and other supportive measurements.  Chest physiotherapist was called and CPT was performed on child.  At around 6:30 PM, child was not responsive to the current CPAP settings with low activity in her vitals.  It was then decided to intubate the child on mechanical ventilator with ET Tube.  Following all aseptic standards, the child was intubated with settings at 6-cm and FiO2 at 100%.  A 2-D echo was performed which was suggestive of Moderate PDA with Left > Right and Moderate OS, ASD with Left > Right and dilated cardiac chambers.  Her CRP levels were increased to 12.8 mg/L.  Under aseptic conditions, a central line was secured on March 28, 2018 by anesthetist and PRBC was transfused due to anemia.  Regular monitoring of ABG’s and Chest X-Ray were done.  For congestive cardiac failure, chest x-ray was suggestive of right upper lobe pneumonia, pulmonary edema, liver 2-cm BCM.  Inotropic supports were started and antidiuretics were given.   Currently, child is continued with support on mechanical ventilator in SIMV Mode.  Pediatric intensivist tried to wean off from ventilator support, but the child still has persistent tachypnea and hence decided to continue the child on ventilator.  However, facial edema is mildly decreased. 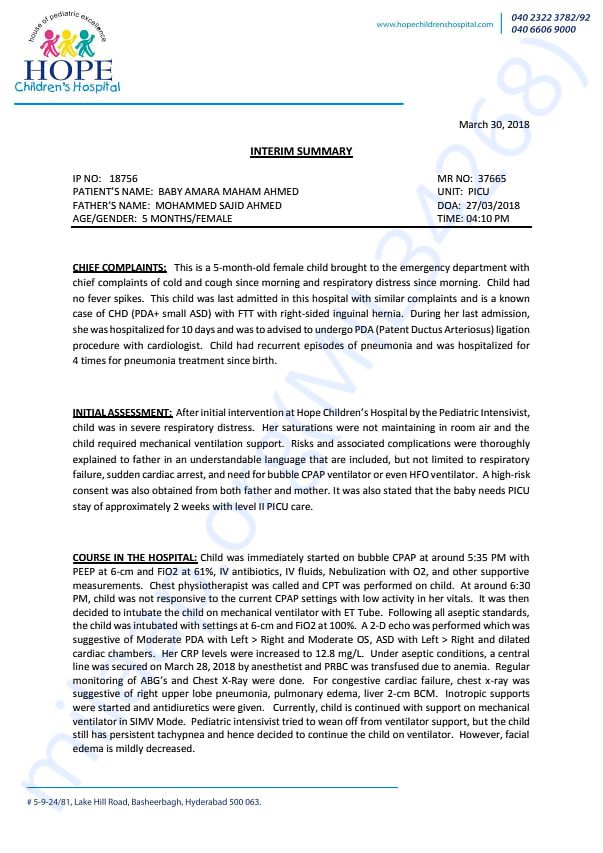 This campaign has stopped and can no longer accept donations.
$150 Million +
Raised on Milaap
Are you in need of financial support for medical or personal emergencies, or a social cause?
Start a fundraiser
Or
Know someone in need of funds for a medical emergency? Refer to us
Campaign organizer contact_mail
IK
Idrees Khan
Beneficiary: Mohammed Sajid ... info_outline
Report fundraiser

IK
You are sending a message to
Idrees Khan
Go back 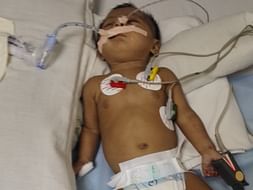