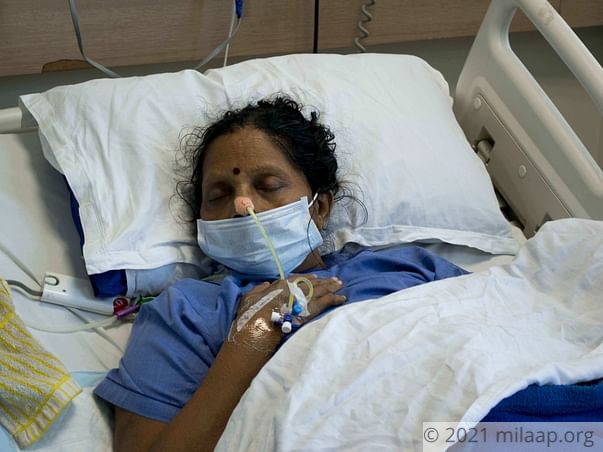 “She has polio, it’s hard for her to walk. If anyone in the neighborhood falls ill, she is the first one to visit them and feed them. I don’t know why this has happened to her but by God’s grace, she has regained her consciousness when all hope was lost. Now, she needs to remain in the hospital for at least a few weeks.” – Nitin, Harsha’s husband

Harsha at the hospital

Filled with humility and joy, Harsha has done nothing but add positivity to the lives she touched. Now, with almost 90% of her liver damaged, not only has she regained consciousness from being so close to death, but she also has a good chance of complete recovery if she remains in the hospital and continues treatment. Her family is trying hard but they simply can’t meet the costs of the life-saving treatments she needs.

God’s miracle – Harsha regained her consciousness after being very critical

When her liver started deteriorating in November 2017, 54-year-old Harsha was undergoing her treatments through frequent visits to the hospital and medicines. Around Holi this year, her head started blasting with pain. In no time, she was in an ambulance and semi-conscious, she was unable to recognize anyone.


Harsha, when semi-conscious, unable to recognize anyone

“She was immediately taken to the ICU and put on the ventilator. In the ambulance, she couldn’t even recognize me. She lost consciousness. The doctors said she was so critical that she couldn't come back. Doctors had lost hope. My family and I lost hope. But miraculously, my wife regained consciousness a few days back! She fought for her life and didn’t give up. It’s by God’s grace she’s alive. “ – Nitin

Now, Harsha has not only returned after almost dying, but she has chances of recovering completely too.

90% of Harsha’s liver is damaged

Last December, after her legs were weirdly swollen and her stomach was extremely bloated, Harsha’s medical tests revealed that her liver was deteriorating rapidly.

The 54-year-old was experiencing weakness. She couldn’t eat at all because her stomach was bloated. She would also get dizzy very often. This February, 4.5 liters of water was removed from her body. She had chronic liver disease which is now rapidly worsening.

Harsha’s only hope of recovery is to remain in the hospital for, at least, a few more weeks and get the treatment that will save her. She has fought hard to come back from the jaws of death. As most of her liver is damaged, Harsha's brain also doesn't function properly and she is disoriented.

“She has 90-95% chances of a complete recovery! This is, truly, a miracle. Honestly, we had all lost hope. Her condition was so bad that my daughter (Sonal) fainted in the hospital after looking at her. But now, she needs daily treatment and exercise too.” – Nitin

Harsha's family at the hospital beside her

Harsha and Nitin, both, have polio

Apart from other limiting factors, Harsha and her 60-year-old husband, Nitin, are both victims of polio. Their movement is severely affected and they have lived their entire lives with such a disability. Now, Harsha is unable to walk at all, compared to the little she could before what life threw her way.

Harsha is the most humble and joyous person

“She’s such a happy person. She doesn’t have even a single bad habit. She loves feeding people too, especially those who are sick or alone. She’s been nothing but a positive influence on other people. Over 50 people, from her hometown in Gujarat and other places we lived, have come to meet her since she’s been in the hospital. Still, even though, she’s extremely critical, she says not to let the visitors go without feeding them. That’s the kind of person she is.” – Nitin

Nitin and Harsha, disabled, have lived a life of struggle

Nitin has managed accounts for a small salary for his entire life. Nurturing 2 children, with so less, has been nothing but a hard battle for Nitin and Harsha.

Their daughter, Sonal, is a housewife and their son works with accounts for a meager sum too. They’re trying hard to arrange funds for their mother through different trusts but are running out of time. Until now, Harsha’s family have spent around Rs. 8.5 lakhs on Harsha’s treatments and medicines.

The total cost of the additional treatments required to diminish and manage liver disease is estimated to be around Rs 8.79 lakhs. Nitin, who has exhausted his entire life's savings and is on the brink of retirement due to severe back pain, has nothing left to save his wife. He has no option left but crowdfunding.

After being so close to death, Harsha has miraculously regained her consciousness but is still very critical unless she gets the additional treatments immediately. Her family cannot afford the this and they need your support to help her live.

Your support could save Harsha’s life. 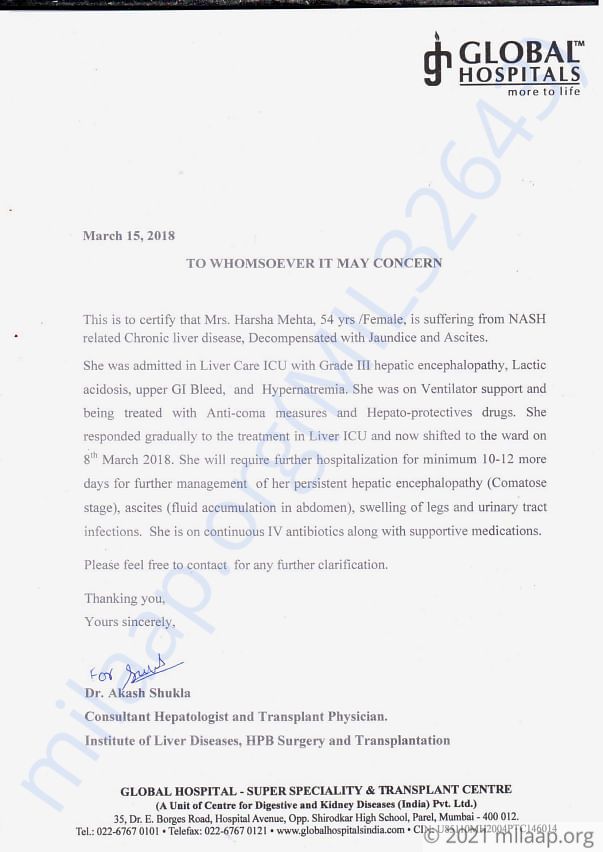 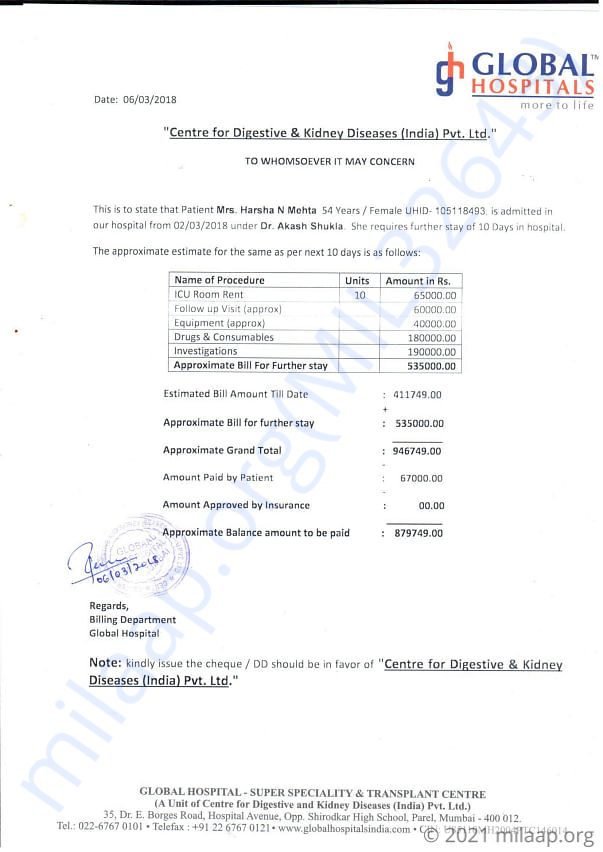 My mother, Harsha underwent a successful liver transplant on 17th April. I, her daughter was the donor and we both are doing well now. Harsha was discharged from the hospital recently and she's currently at home.

Doctors have suggested regular follow-ups for her and a less intake of food, as of now. She is unable to make movements without support. Our family is extremely thankful to each one of you for the love and support which you have shown towards my mother, We shall always be grateful to each one of you.

Scan & donate with any app
check_circle_outline Download payment receipt
Report fundraiser
Know someone in need of funds for a medical emergency? Refer to us
Rs.7,250 raised

Donated to this campaign via Bank transfer/QR Code? Click here if you can’t find your donation listed below.
A
Anonymous donated Rs.2,500
VV
V donated Rs.1,000

Have a speed recovery mother get well soon!

May god give strength to the fighting warrior

Donated to this campaign via Bank transfer/QR Code? Click here if you can’t find your donation listed below.
A
Anonymous donated Rs.2,500
VV
V donated Rs.1,000

Have a speed recovery mother get well soon!

May god give strength to the fighting warrior 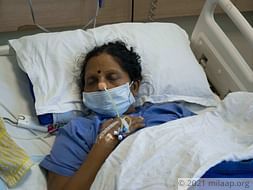