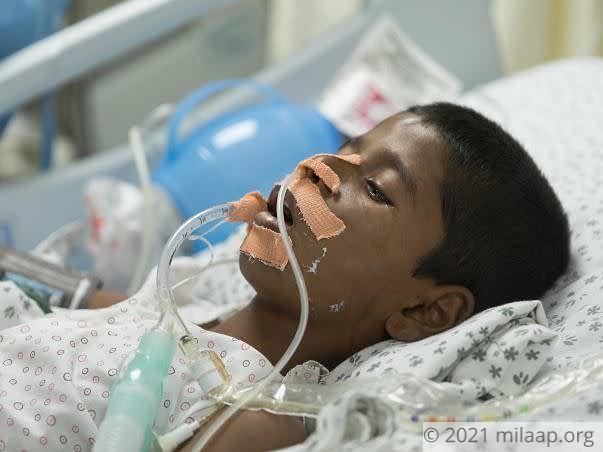 “In the morning he was getting ready to go school, and by evening he could barely walk without support and his eyes were swollen. We didn’t know what was happening to him. We panicked and took him to the doctor, but our son couldn’t even swallow the medicines he was given. He couldn’t drink a sip of water. 3 days later, he was in the ICU critical and completely paralysed."

Just a week ago, Guru Prasad (8) was active and healthy. Now, he’s fighting a rare and severe disorder that has left him lying helpless and in extreme pain, unable to move a single muscle in his body. Guru can’t even breathe on his own anymore. He needs to stay on ventilator support and get ICU care for at least a month to survive. Savitha and Nagappa are desperately trying to save their son, but their hands are tied.

Guru Prasad has been diagnosed with Guillain Barre Syndrome, a condition in which the immune system attacks the nerves causing a rapid onset of muscle weakness.

“We haven’t even heard of the disease before. We’re still in shock at what has just happened. It started with pain in his legs and hands when we were taking him to the hospital, and soon, the pain spread to his upper body. Before we knew it, he couldn’t walk at all. He was choking on the same air he was breathing. At that moment, I thought we would lose him. It was like his body was giving up on him entirely.”

Guru is still in excruciating pain, but he can’t shout out or cry in pain. Guru can’t move his hands or legs. He’s given food and medications through a tube. He’s now on ventilator support, the only thing that’s keeping him and the hope in his parents’ hearts alive. It’s crucial for Guru to stay in the ICU for longer till he can breathe on his own again.

Guru didn’t understand what was happening to him, all he wanted to do was go back home

“When I see him now, all I think about is what he said to me before his condition deteriorated. It all happened so suddenly. He was crying in pain and he told me that all he wants to do is go back home. He couldn’t explain what was happening to him or why all he knew was that his pain was unbearable. The pain soon spread to the rest of his body. It’s the most helpless I’ve felt as a mother. I couldn’t do anything to make him feel better. I want him to know he’s not alone in this fight and that we’re trying to do all we can to save him.”

With treatment, Guru can get better and go home again, but they're running out of time and money

The doctors are positive about his survival and recovery, but his parents have nothing left to continue his treatment for another month. The only thing standing in his way right now is his family’s financial condition.

“It’s a terrifying thought for any parent to think about what might happen if we’re forced to stop his treatment. We’re only daily wage workers. We can’t afford the lakhs of rupees needed to keep him in the ICU. We have already spent a lot this past week, after begging and borrowing. The doctors say he can get better with medical care. He will be able to breathe on his own and will be able to move again with therapy. We just want our Guru back to us. I just want him to live.”

Savitha and Nagappa are devastated beyond words. The daily medical expenses for Guru’s treatment far exceed what they’ll ever be able to make in a month. Guru is only 8-years-old and has his entire life ahead of him. With timely treatment and continued ICU care, he can make it. He needs your support to get the life-saving treatment he needs.

Your support can save Guru’s life.