Save Suba, Mother Of My 8-Year-Old Son to Recover From Brain Damage | Milaap
This is a supporting campaign. Contributions made to this campaign will go towards the main campaign.
This campaign has stopped and can no longer accept donations.
Milaap will not charge any fee on your donation to this campaign.

Save Suba, Mother Of My 8-Year-Old Son to Recover From Brain Damage 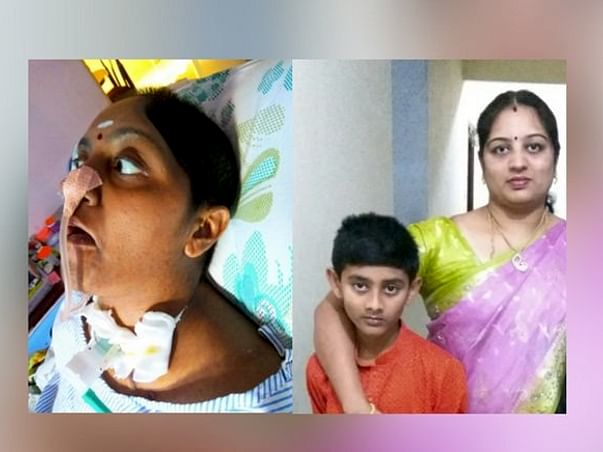 What exactly happened on that day?

On that day, she was all alone as I (Sathish- her husband) had gone out of station. She had been vomiting repeatedly and frequently. She had taken our neighbour's help to go to the nearest hospital near our residence and got admitted there. The concept of seeing doctor as GOD has become obsolete now a days, not without its own merits.
The doctor at the local hospital had treated her and given medications to suppress the repeated continuous vomiting and treated her for dehydration by admitting her in hospital rather than trying to understand the root cause of why repeated vomiting was happening!
Hearing the news over phone and due to intuition, I rushed back to the hospital at midnight and was sitting beside my spouse all through the night. All queries regarding the root cause of the problem to the local hospital yielded no fruitful results. By morning, I sensed that there was no improvement in  my wife's condition and hence took her to a better and reputed hospital (Manipal Hospital) with good infrastructure.

Can miss Gold, Can"not" afford to Miss THE GOLDEN HOUR

Who said Tsunami can originate only from oceans, it CAN be from hospitals' ICUs as well!  Doctors updated she had suffered a stroke and blood flow to her brain had been blocked due to arterial clot and had suffered stroke. On top of the pain due to this Shocking information, doctors at Manipal hospital updated that the golden hour (3 hours) has been missed due to the time spent in the local hospital with out  right diagnosis / attention .
Doctors ruled out the possibility of dissolving the clot through medications as it was well past the GOLDEN HOUR PERIOD.
Doctor suggested the Best way forward is to perform brain Skull  surgery(craniectomy )to save life as brain started swelling due to lack of blood flow. For a week, she looked like recovering quickly but there came another series of lung complications (pneumothorax of both lungs) making it difficult for her to breathe on her own. She had been under Ventilator support to overcome breathing difficulty and further  Tracheostomy was done to enable her survive this life scare. After the lung issues, she suffered a cardiac arrest for 3 minutes. Doctors recovered her from cardiac arrest but they said enough damage would have been done already during those 3 minutes when the blood flow would have been stopped to all the body parts " including the sensitive brain".
Ever since, her recovery has been pretty slow with various infections being picked up from hospital settings and she was administered  with multiple antibiotics continuously to fight various infections.
I have been supporting my wife emotionally, physically, financially and taking all positive steps to recover my spouse at all cost.
Prayers have become the order of the day not just for me but for all the whole family  and friends.
No Pain No Gain is theory - All Pain No Gain has been the reality
They say "No Pain No Gain" but in Wife’s case it was/is "All pain but No Gain".
Status of the family
First generation salaried middle class family with limited medical insurance coverage gives a bitter learning when such life critical incidents happen to our near and dear ones. It has been more than 3 months and lump sum
( 30 Lakhs+) money had been spent for my wife's recovery.
All insurance/deposits/loans from myself and near-and-dear ones have been  exhausted in this course of 3 months - After all a middle class family does not have infinite source of income.
Of late, doctors have recommended  to treat her under home care to avoid hospital infections. Currently She is under home care with life saving support system in place through an agency.

Now she is opening her eyes and is able to hear and stare at the sounds/speeches/songs we are singing/talking to her though not able to follow the objects with her eyes.
Tears roll down from her eyes ,when our son talks to her !!

Just when we ran out of all money sources, we are seeing a glimpse of hope. The light at the end of the tunnel drives us to explore all options to save my wife's  life.
8 year old kid has no idea why his mom is not sleeping with him and telling him bedtime stories.
If not for anything, at least my wife has to recover for the future of our 8 year old Son who is unable to comprehend what is happening to his dear mom and why she is not telling bed time stories as she does usually. No one in the family has the guts to tell the bed time story to the kid when he curiously asks why mom isn't telling stories and not talking to him.

How can we help?

"Pain is inevitable but suffering is optional" - not at all true for some patients like my wife.
They say miracles do happen one day. Making that miracle happen for the kid by saving his mom's life is in our hands now.
While we cannot do anything to get rid of her suffering, we can provide our support to mitigate her suffering to the maximum level possible and help her to recover slowly but steadily.
The monthly expenses for the lifesaving support system, further treatment and nursing is approximately 1.5 lakhs per month. The doctors have already indicated that the recovery would be a slow process due to brain injury.  All that we are praying to Almighty now is to enable us support Suba for a year so that she could recover to a reasonable level and her kid would go near her without being afraid of all tubes running across her body.
For an year's expenses, we expect that we may have to raise a fund of 18 lakhs in 3-4 months ( by April ,2017 end )
All your contributions ( however small ) will go a long way in creating a positive impact on my wife's recovery .
Your contribution will enable us to provide medical support  and do necessary medical interventions at appropriate times to get her back safe to her child.
Consider Donating generously to save my Wife (Suba, Mother of 8 year old kid ) - after all God comes in the form of humans to help fellow human beings.

May God bless you and your family with a very healthy and peaceful life forever and praying no one ever should be put into a trying situation like this however bad one’s karma is!
Wish you a very happy and healthy new year. 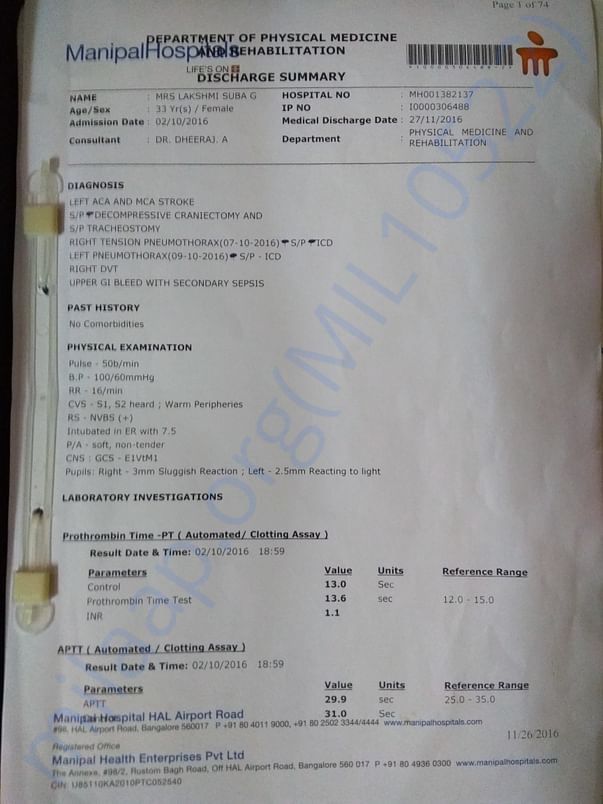 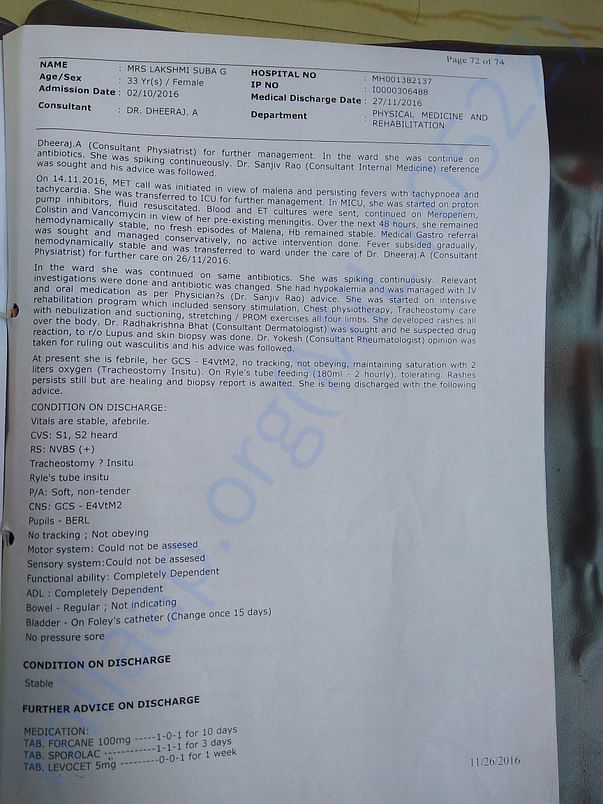 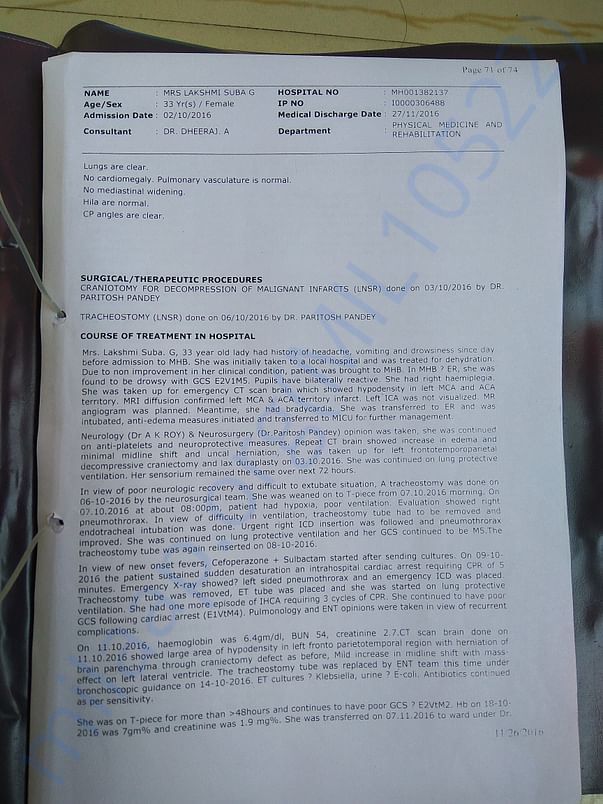 Ask for an update
My wife had cranioplasty surgery using titanium mesh  as skull replacement in the month of June 2018 .We were not able to use her old skull as it had become weak since skull was kept inside abdomen for more than 1.5 years .She is now better  after all  the post  surgery complication like swelling in the head .

We have also removed the rhyles tube used for feeding via nose and started with oral semi solid food.She is growing like new born baby in terms of food habit.  She cannot consume  more than 10 ml of water at a time ..Hiccups starts once we give more quantity of water.

Unfortunately still no speech yet and still bedridden .Making her sit on wheelchair for change in  environment .We believe , she can understand the speech as she is emotionally responding based on the speech by crying or laughing.
Tracheostomy is in place as an emergency support .

We could notice slow and steady stages of improvement ,but definitely she is is improving with all your prayers.

Really all your prayers and support has helped her to reach this stage.Once again , Thanks a lot for your kind hearted support .

My Wife is still recovering with home nursing support. Alertness level has improved. She is still bedridden but leg movement noticed. One week back, swelling noticed above the knee region due to calcium deposits. Performed Ultrasound and X-ray in the leg region as per the doctor's suggestion and started the treatment.

She is recovering from swelling. She hasn't spoken yet but is crying. Hope she'll recover fast in next months. Will keep you posted.

Thanks for all your support. Please do pray for her health.
Dear Supporters,

Thanks for your prayers and support.My Wife is showing some minor movements on leg/hand during rubbing on the neck side.Still, we are waiting for her speech.Better understanding during our conversation and her response are with a loud cry.In a day, she seems to be alert or responsive during few hours.

We are making sit on a  wheelchair for a couple of hours in a day.But she continues to be in bed for long hours.All of our continued prayers and support should give her strength to bring her to the next stage of normal life.

I thank you all again for the great support.
Load more
Donate
OR

Scan & donate with any app
check_circle_outline Download payment receipt
Report fundraiser
Know someone in need of funds for a medical emergency? Refer to us
$0 raised

This campaign has stopped and can no longer accept donations.
$150 Million +
Raised on Milaap
Are you in need of financial support for medical or personal emergencies, or a social cause?
Start a fundraiser
Or
Know someone in need of funds for a medical emergency? Refer to us
Campaign organizer contact_mail
SB
Sudeesh Bharadwaj
Beneficiary: Lakshmi suba info_outline
Report fundraiser

SB
You are sending a message to
Sudeesh Bharadwaj
Go back 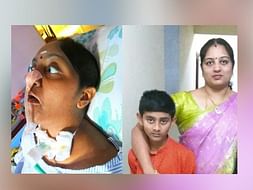 Save Suba, Mother Of My 8-Year-Old Son to Recover From Brain Damage