This Mother Fights Alone To Save Son From Cancer For The Second Time | Milaap
This is a supporting campaign. Contributions made to this campaign will go towards the main campaign.
This campaign has stopped and can no longer accept donations. 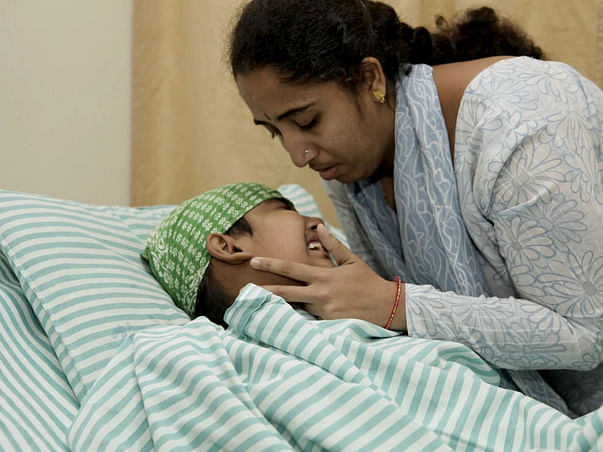 When Revathi found out that her son Dayanidhi had blood cancer back in 2016, she tried to keep calm. She believed that she and her husband would figure out a way to help their son fight. But what happened was the opposite. He had an immediate brain bleed because of his shooting blood pressure and his mouth became paralysed. The fact that their dear son had cancer destroyed him, mentally and physically and has been living like a recluse ever since. Revathi has been single-handedly struggling to care for her sick son and manage burgeoning expenses ever since.

Revathi is Dayanidhi's only pillar of strength

It was a simple back pain…or so they thought

“Dayanidhi had been complaining of back pain for a few days when we finally decided to take him to a doctor. The pain did not subside despite taking the medicines that they prescribed. My maternal instinct told me that there was something wrong. Of course, then he did not look like he was sick but I knew. A blood test brought my worst nightmare to life: my son had blood cancer and had to be given chemo immediately,”- Revathi, Dayanidhi’s mother.

Revathi did not think of anything else; she knew she had to do act immediately or her son would slip away from her.

Revathi didn’t want to scare her only child by telling him he had the most dreaded disease on the planet. When the hospital visits became frequent and injections a daily affair, he used to ask her if he was very sick. She would always console him by saying that he had a small infection that would go away with proper treatment. Poor Dayanidhi always believed his mother.

Dayanidhi’s father, Dharmaraj, had just joined a new company in the capacity of a civil engineer, but everything went haywire as soon as he learned of Dayanidhi’s illness.  He had to be hospitalized because of his brain bleed and paralysis too, and therefore could not go to work. Revathi had to sell whatever jewellery she had and take loans to treat her son and husband. The family even relocated from Mandya to Bengaluru so that Dayanidhi would get the best possible treatment. To make ends meet, she even started tailoring while staying in the hospital.

“I would ask the nurses in the hospital if they wanted their clothes stitched. It had come down to a point where I had to beg people to let me tailor clothes for them. I had taken hefty loans from friends and family. How else would I repay them? Kind nurses in the hospital would give me dress materials and I would find spend sleepless nights stitching. Even an extra hundred rupees made a big difference," says Revathi.

Dayanidhi was a happy child once

Dayanidhi had been recovering well, until cancer decided to show its ugly face again

Dayanidhi underwent chemo therapy for 8-and-a-half months straight and had almost recovered. “He was responding very well to chemo and at one point we believed that he had completely been cured. He was excited about going back to school because he would be ‘normal’ again.


“When Dayanidhi was first diagnosed with cancer, his friends had deserted him because they thought cancer was a communicable disease. My son felt like an untouchable for months altogether, and was in fact happy when we left to Bengaluru for treatment. So when he believed that his cancer had gone away for good, he was very happy,” adds Revathi.

But his happiness was shortlived. He had a cancer relapse earlier this year

The doctors have told Revathi that two rounds of intensive chemotherapy and a subsequent bone marrow transplant is the only way Dayanidhi can be saved. Dayanidhi’s father’s health also got much worse. His entire left side is paralysed such that he cannot even lift a bottle of water by himself now.

Now, Dayanidhi winces in pain as he waits for a transplant

Dayanidhi is a sad shadow of the active and playful boy that he was before cancer came for him. The boy who loved drawing and painting once hardly brushes his own teeth now. His mother has to help him in everything. On really bad days, he shivers and cries uncontrollably. Nothing can calm him down then, not even the loving embraces of his mother. His irritability and weakness is getting worse by the day.

Doctors have assured Revathi that Dayanidhi will be completely okay if he gets an immediate bone marrow transplant. But with no income, Revathi is struggling to make enough money for the surgery.

“My relatives do not pick up when I call them because they think I am calling to ask for more money. I have nobody to even console me. Everybody has alienated us. How will I make Rs 30 lakh for Dyanidhi’s surgery? My son asks me every day how we can afford to stay in such a big hospital. I tell him we will find a way out. If I don’t, I will lose my son forever,” laments Revathi.

Your contribution can save Dayanidhi 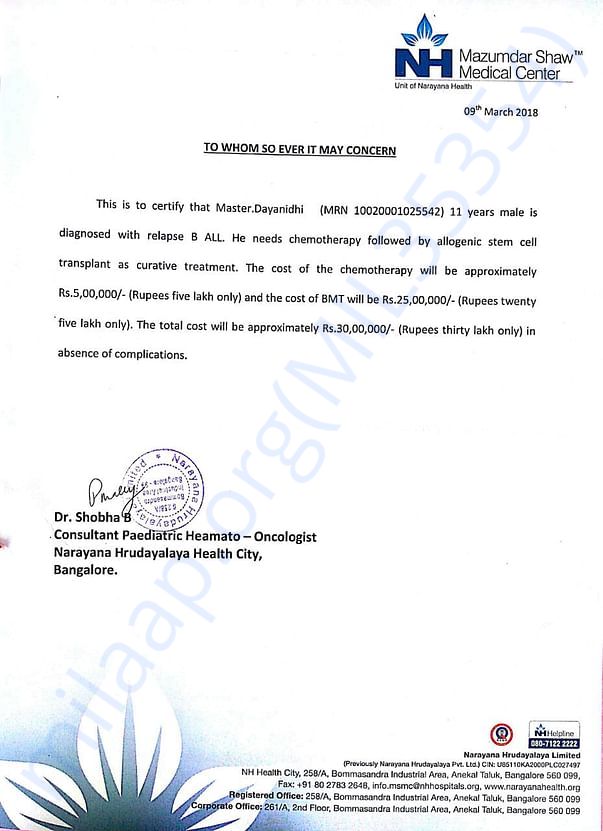 Thank you for the wonderful support that you have shown towards Dayanidhi. He is doing better now and has successfully undergone the bone marrow transplant procedure. His health was improving after that and based on his health the doctors have discharged him from the hospital.

They have advised us to visit the hospital once a week for regular follow-ups. Based on these visits they will be suggesting the future course of action. Please do pray for his health and speedy recovery.

Thank you all once again.

Thank you for the wonderful support that you have shown towards Dayanidhini. He is doing better now.

Thank you all once again and I would request you to please pray for his health and speedy recovery. I will keep you posted.

Thank you for the wonderful support that you have shown towards my son Dayanidhi. He is doing better now compared to earlier and based on his health he has been advised to undergo radiotherapy.

Today, 19th May will be the last day of radiotherapy and he has been responding well to the treatment so far. He has reduced his appetite but the doctors suggest us that this is normal and he will be recovering from it soon. From tomorrow they will begin his next cycle of chemotherapy.

I am a suitable match and they will be extracting a part of my bone marrow on Monday and the implantation procedure will begin for him from Tuesday.

I would like to thank you all once again and I would request you to please pray for his health and speedy recovery. I will keep you posted. 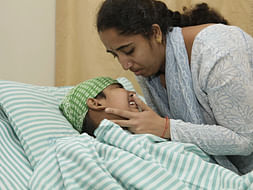