Ashok's online fundraiser for Sports | Milaap
Milaap will not charge any fee on your donation to this fundraiser.
I wish to climb Mt. Everest in 2016. Please help me achieve my dream and bring India on a global map by letting me complete this unique journey!
1%
Raised
Rs.1,000
of Rs.35,00,000
1 supporter

It’s so easy to be bogged down by the problems in life and more easy is to not put up a fight! But in the course of life there are some people who inspire you, who fill you up with positivity and who make you realize that life is not as bad and as hard it seems. That the problems in life should be fought with strength and determination and that it’s better to be a hammer than to be a nail! Your life is what you make it to be. It’s all about perspective - a simple thing which we tend to forget when life throws lemons at us. Ashok Munne is India’s very own one legged wonder who has proved to be an inspiration for many. This 31-year-old mountaineer has proved that if you have the will, you have the power to change your life completely!

Ashok Munne lost his leg in a train accident in 2008. He was traveling in the train and when he was near the gate, somebody accidentally pushed him and he fell outside the train. One of his legs came under the train wheels. Ashok lost his right leg below the knee in the accident. For the next one year, he underwent two operations in a government hospital which went wrong. He lost 25 kgs of weight in one year bringing his weight to a mere 40 kgs. 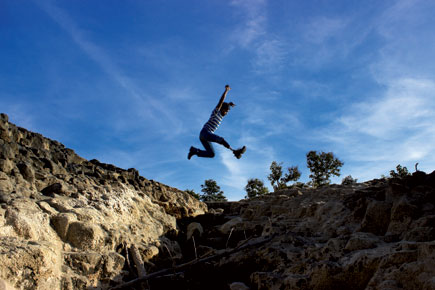 When in despair, even the closest of your friends’ desert you and Ashok experienced the same after the accident. Many of his friends and relatives started maintaining a distance from him thinking that they may have to shell out money for his treatment. They stopped visiting him in the hospital as well. Fed up with his situation and wishing to make a turnaround, Ashok took his life in his own hands. He understood that if he wanted to do something better with his life, he would have to do it himself. He heard his inner voice which told him, ‘Ya toh mar ja, ya toh sab kuch bhul ke aage badh!’

He started reading inspirational and motivational books. He stopped taking medicines completely and started doing Yoga. The positivity which he brought in his life was working for him as he started to feel better. While working as a driver in Nagpur, with the help of an NGO, he went to a private hospital for an operation in Pune. It is there that he saw the news of Krishna Patil, the mountaineer scaling the Everest on a news channel.

Something in him changed at that moment and he decided that no matter what, he would do the same. Mount Everest – Earth’s highest mountain and the Mecca of mountaineers became Ashok’s dream. And so he started preparing himself for the same. He started practicing at the nearby small mountains around his village, Katol. He kept working hard, kept trekking and kept scaling small mountains. 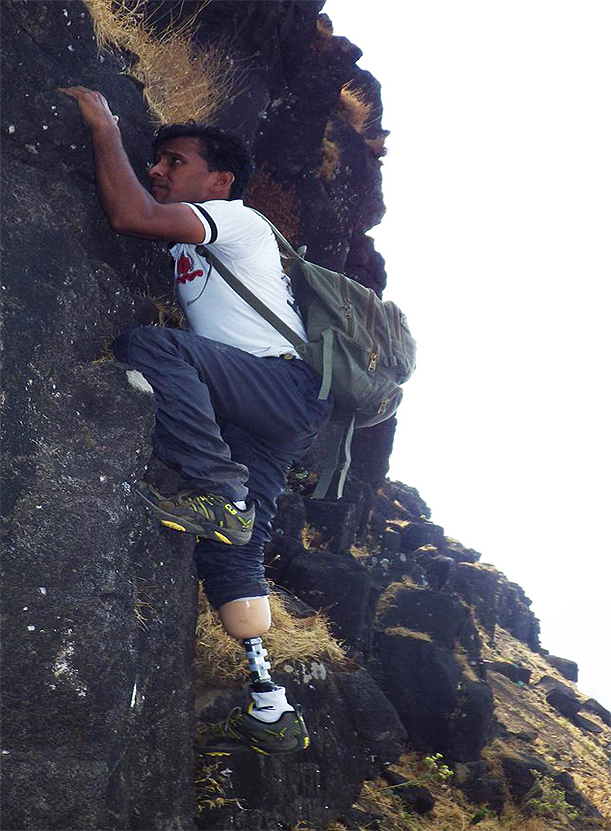 Ashok shocked everybody when he scaled Mera Peak (21,247 feet) in 2012. He also took a bike ride from Delhi to Ladakh in June 2013. Ashok now organises various camps for adventure enthusiasts and also accompanies them on the journey. He has also been invited on many platforms to talk about his struggle and his life story to motivate and inspire people. Over a period of time he has also learned paragliding and scuba diving; he has also learnt Martial Arts and has obtained a black belt and all this with just one leg! Ashok plans to climb all the killer peaks in the world at least once but his ultimate dream remains the same – Mount Everest – which he plans to scale in 2016.

" I, Ashok Munne, would like to wish you a very Happy New Year. May this year ring in lots of love and prosperity for you and your family. May you also lead an adventurous 2016. Talking about adventure, I would also take this opportunity to request you to support Mission Everest in every possible way.  I wish to climb the Everest in 2016. Support me to achieve my dream and bring India on a global map by letting me complete this unique journey." - Ashok Munne

Times of India, To Everest, with false leg and true grit: http://timesofindia.indiatimes.com/city/delhi/To-Everest-with-false-leg-and-true-grit/articleshow/18123692.cms