Paramilitary Personnel’s 6-Month-Old Baby Needs A Liver Transplant | Milaap
This is a supporting campaign. Contributions made to this campaign will go towards the main campaign. 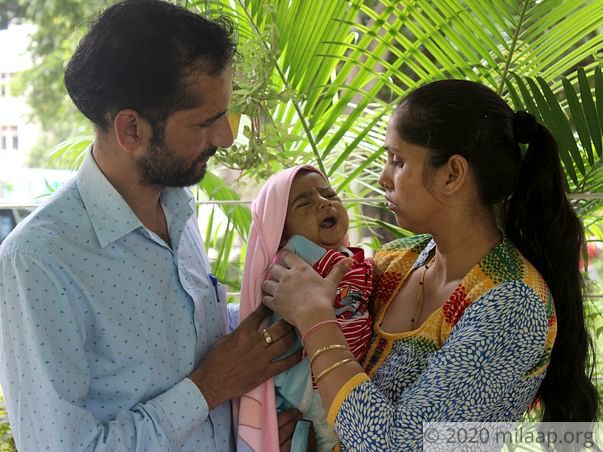 “I used to guard the borders of our nation, but from the past 6 months I have only been guarding my sick baby. Despite multiple efforts, Chaitanya’s liver has become completely compromised. Infected fluid fills in his tummy every two days. I can only watch him wail in pain when this happens. He cannot live like this forever – if he does not get a transplant in less than a week, his bad liver will fail his body. I had begged and borrowed to prolong his life this far, I am left with nothing now except for fear for my baby boy’s life.”-Ashish Kumar, father of 6-month-old Chaitanya.

This baby has never been home; he has been staying in hospital after hospital since his birth

Baby Chaitanya was born in a private hospital in Uttarakhand. Before his loving parents Ashish and Meenakshi could take their bundle of joy home, his skin started acquiring a yellowish tinge within two days. His eyes had also become yellow. What disturbed these first-time parents more was the fact that he even started passing white pasty stools. They did some tests at the hospital, but came up with no substantial reasoning for what was happening to Chaitanya. From there started these parents’ painful struggle to get their baby diagnosed.


“We were advised to take him to a hospital in Dehradun, where they did some scans and tests. They told us that it was something related to his liver, but were not sure. We were then told to go to Delhi, where finally our son was diagnosed with a severe liver disease.”-Ashish.

Chaitanya underwent an emergency surgery when he was just 75 days-old, which was unfortunately not successful

Ashish and Minakshi’s baby boy was diagnosed with biliary atresia, a severe liver disease where the ducts that drain bile into the body are narrow, blocked or absent. The doctors in Delhi suggested that he undergo the Kasai procedure, a surgery that creates a channel for the bile to drain from the liver and improve liver function. Ashish had to use up all the money that he had saved over the years to pay for it, but all that he really cared about was his son’s health.

“We believed that the surgery would cure him once and for all. We prayed and prayed for our baby to get alright. But soon after the surgery, we were shocked to see that the yellowness on his body had not gone away. He developed a high-grade fever and infection just 7 days after the surgery. He had to be admitted in the ICU for more than 20 days. Everything was going wrong, but we still had hope. But after the 3-month monitoring period, the doctor gave us the shocking news that not only did the surgery not work, our son’s liver was getting damaged day by day.”-Ashish.

This poor baby’s liver has become so damaged now that his tummy becomes enlarged from infected fluid filling it every 2-3 days. Doctors have removed fluid from Chaitanya’s tummy more than ten times in a span of two months. Without a liver transplant, chances are ripe that Chaitanya would not live beyond a few days.

“When his tummy becomes big, Chaitanya gets very irritable. He does not drink milk properly and cries out in distress. His condition is becoming worse with every passing day. Medicines alone cannot help him anymore, his troubles will only end after he gets a new liver.”-Ashish.

Ashish has not gone back to work ever since Chaitanya was born, and is struggling to meet expenses

Ashish used to work in a lower post at the ITBP (Indo-Tibetan Border Police) and used to earn a modest income, just enough to clothe and feed his widowed mother, college-going younger brother and his wife. But Chaitanya’s health problems forced him to take an extended leave for 2 months, but he never joined back on duty. His baby has always been critical, so Ashish never got a chance to focus on anything except hospitals and treatment.

“By borrowing, I have spent almost 13 lakh for my baby’s treatment so far. I have not had a peaceful night’s sleep so far in all these months. When I close my eyes, images of my son in the ICU crop up before me. I cannot lose him at any cost, I will not be able to forgive myself If I do. I need some help from Good Samaritans to save my son, because I cannot afford to do it alone.”-Ashish.

Baby Chaitanya has less than a week to get a liver transplant, without which his fully-damaged liver will kill him. Infected fluid in his tummy does not let him be at peace even for a minute. His mother, Meenakshi, is a potential donor, but lack of money is an obstacle. His father, Ashish Kumar, who has been guarding India’s northern borders is in deep financial distress. Now is your chance to give back to him for his service to the nation.

UPI: givetoashishkumar2@yesbankltd (Copy to clipboard)
Or
Click here to read the instructions before you make a bank transfer. 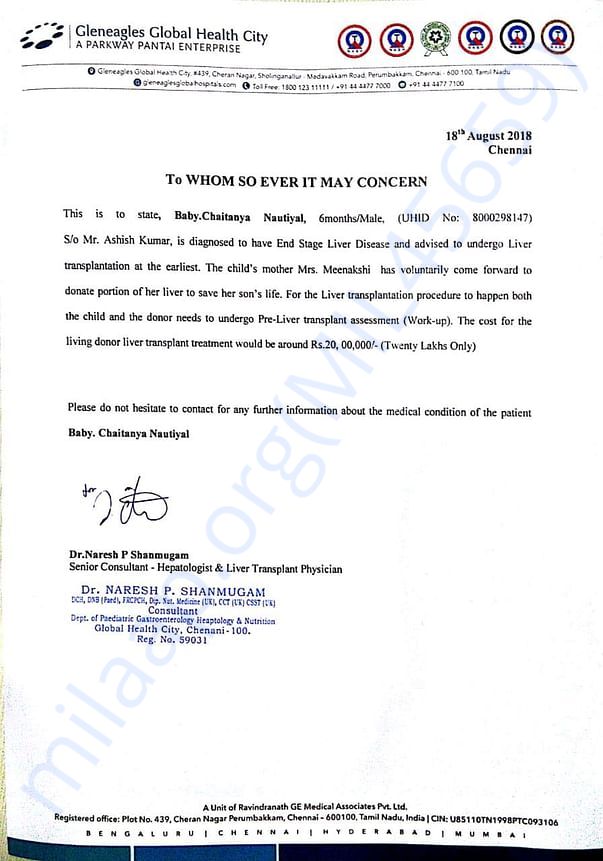 UPI: givetoashishkumar2@yesbankltd (Copy to clipboard)
Or
Click here to read the instructions before you make a bank transfer.

Thank you all for supporting my son in these tough times.

He was discharged last week and is at home and doing much better now. We will be taking him for a review this week. After the transplant he was on the ventilator for 15 days, and ICU for 10 days. He also had pneumonia post-transplant but after medication he recovered.

Chaitanya is eating well and drinking juice also. The doctors are hopeful about his recovery.

Thank you all for your wishes and support.

Thank you for your love!

Chaitanya underwent the liver transplant last month and is doing better now. He was admitted for around two weeks after the transplant and was on ventilator. Now he has been shifted to the ICU, but he is still on ventilator support as he has trouble breathing.

His mother was the donor and she is doing fine now. He is on medication as well. The doctors say that he will take some time to heal completely and it depends on his condition. They will monitor him for 15-20 days and take a call on future course of action. After he gets discharged we will take him for a check up every week for a month.

None of this would have been possible without your support. We will always be grateful to you all. Thank you!

Thank you for the love and support you have shown towards Chaitnaya. Here is a quick update on his health.

The baby has undergone all the pre-requisites tests for the transplant. All the reports are normal. The mother is also fit to donate the part of her liver and once we get a confirmation on this we will let you know.

The family needs to visit the hospital and the transplant is scheduled for end of this week. Will keep you posted about the same, please pray for his health and speedy recovery.

Donated to this campaign via Paytm? Click here if you can’t find your donation listed below.
SM
Surya donated Rs.7,500

Donated to this campaign via Paytm? Click here if you can’t find your donation listed below.
SM
Surya donated Rs.7,500 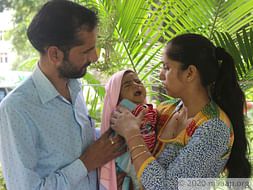