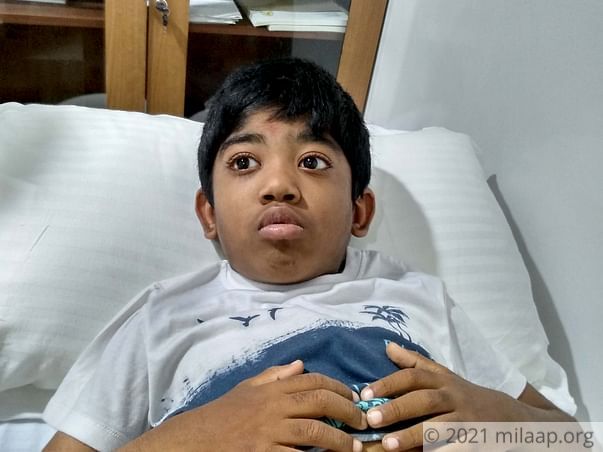 A year ago, little Bhargav Reddy liked to spend his evenings playing all kinds of outdoor games with other kids in his building. He loved staying out as much as possible. But times have changed drastically for the 9 year-old. Now he is forced to stay indoors because of kidney failure. Neither can he meet with his friends like before nor can he go to school. And the worst part is that he has to undergo home dialysis at for 12 hours in a day; 12 hours of needles and pain that he simply cannot bear anymore.

It started with a simple chicken pox, but ended up being a complex disease

“In February last year, Bhargav got chicken pox. It was fine for two days or so but one day we noticed that his eyelids and feet started swelling unusually. We knew something was wrong and took him to the hospital right away. His blood creatin levels were very high and so it didn’t take much time for the doctors to diagnose his disease. Bhargav’s immune system had failed and cells in his body started attacking his kidneys. His kidneys were failing gradually. I kept asking the doctor how this could happen to such a healthy boy like Bhargav. He did not deserve it,” says Lalith Kumar, Bhargav’s father.

Bhargav has become used to living with pain, because he thinks it will end soon

In the beginning, Bhargav was struggling to come to terms with his illness- his muscles hurt if he walked, he could not sleep because of his swollen eyelids and he had to have tablets for hypertension that made him drowsy. Now, nothing has changed, but Bhargav has learned how to face these difficulties like a champ.


“My son is very resilient boy. Even when it really hurts, especially during dialysis, he remains calm. His mother, Uma Rani, cries for him instead. But he tells her he is a strong boy and smiles through his difficulties. My boy will beat this illness, I am certain of that,” adds Lalith Kumar.

The little fighter knows the A to Z of his disease, and is not scared to face it

What was very surprising to Bhargav’s family was how he took a keen interest in learning about the condition he had, from day 1. “He would discuss everything with the doctor, and the doctor would explain things to him in a simplified manner. I have never seen any kid being so brave,” smiles Lalith, adding, “He even knows what medicines he has to take when, and does not depend on anybody. If this is not the mark of a true fighter, I don’t know what else is.”

“We had to send his 13 year-old sister, Vainavi, to stay with her maternal grandparents because she was not able to concentrate on her studies because of Bhargav’s condition. She would spend all her time in tending to him and making sure he was alright, so her academics have suffered a bit,” shares Lalith. Bhargav could not bear his dear sister being kept away from him and did not talk to his parents for many days.

Lalith Kumar quit his small diagnostics lab business to take care of his son full-time. His mother is a nutritionist and the only working member in their joint family consisting of grandparents and Lalith’s brother. “I had to be there for my son. Traditionally women are expected to leave everything and care for their children, but isn’t a father as responsible as a mother? I don’t regret anything. Bhargav and I have become inseperable now. My only worry is that I may not be able to arrange funds for his treatment,” laments Lalith Kumar.

Lalith Kumar has spent more than Rs 30 lakh on Bhargav’s treatment so far. The doctors have said that a kidney transplant can help Bhargav become normal and healthy again, or else he would have to spend the rest of his life undergoing painful dialysis. But Lalith and his wife Uma have exhausted all their savings. They had already sold off their property in Hyderabad, and now have nowhere to go. They want to help Bhargav but cannot afford to.

You can relieve Bhargav of his pain and give him a healthy life. 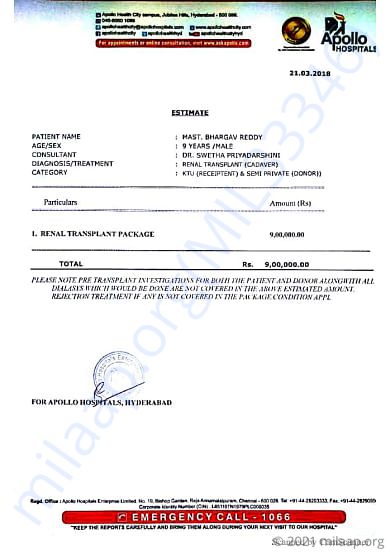 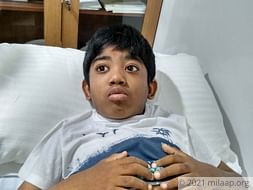