Only A Surgery Can Save 62-year-old Bedbyas From Cancer | Milaap
This campaign has stopped and can no longer accept donations.

Only A Surgery Can Save 62-year-old Bedbyas From Cancer 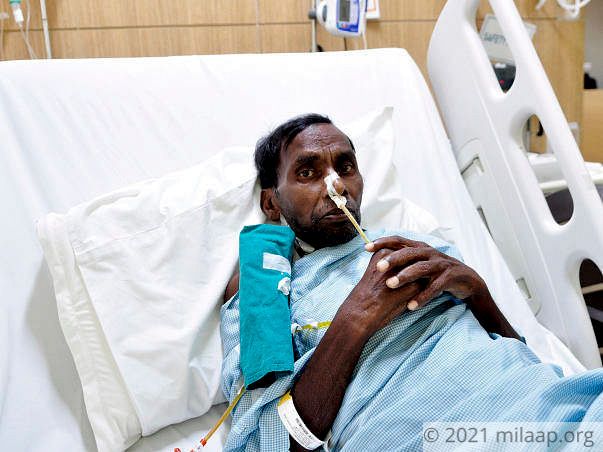 “He had severe cramps and started vomiting. We all thought it was a stomach infection. The diagnosis shocked us all.”

Last month, 62-year-old Bedbyas fell sick with severe cramps and started vomiting frequently. His family members took him to a doctor, who prescribed medication for a gastric inflammation. But instead of recovering, his condition worsened. This time he was taken to a hospital, where the doctors advised him to get a biopsy done. The test results shocked them all. Bedbyas had pancreatic cancer.

Bedbyas Badi had a fairly normal life until recently. He was just like any other man in his 60s - content with his job and family. Life for him and his family was thrown off balance due to cancer. Bedbyas is in a lot of pain and discomfort and sometimes he can’t keep his food down and throws up everything he eats. Doctors at the hospital say that his cancer is still in the first stage and can be treated with surgery. But the surgery needs to be done at the earliest to alleviate his pain.

Bedbyas has two daughters, both of whom are pursuing their higher education. Bedbyas had bright hopes and plans for their future and now cancer makes him worried that he might not even live to see them prosper. Being bedridden makes him feel weak and embarrassed, and he can’t wait to be up on his own two feet again. Since January this year, most of his time has been spent going around hospitals and getting all tests done. He wants to feel normal again, free of cancer but the biggest hindrance in his treatment is the lack of funds.

“Their lives have always been about education. They’ve worked as teachers all their lives and have spent all their savings towards their childrens' education. It’s such an irony that there’s no money left now for his own treatment. He deserves better.”

Both Bedbyas and his wife work as high school teachers for a minimum wage. Realising the need for good education in life, they had made sure their daughters get access to it. All their life, they had saved money for their daughters’ education and now at the time of dire need, there’s nothing left in their savings. So far, they’ve spent over Rs 4 lakhs towards his treatment, by borrowing money from friends and relatives. But now, all their reserves have run dry and there’s no more money left for his treatment.

Bedbyas’ poor financial condition shouldn’t be the reason he give up. He deserves to live and in order for that to happen, his family desperately needs your help. Your contribution can save his life and give him and his family a second chance at happiness. 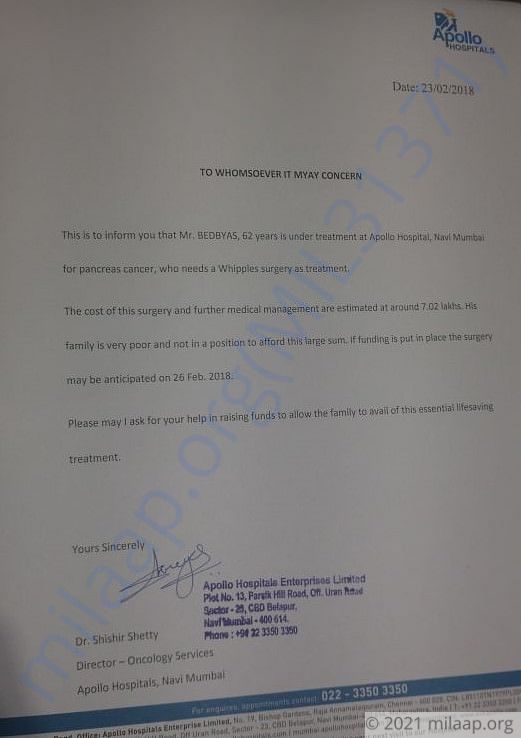 We have some unfortunate news to share. Bedbyas Badi passed away on in the early hours of Wednesday (27st February). All of us are devastated. He fought very hard and was under observation in the hospital. His vitals started failing and the doctors were administering him treatment for the same but in spite, of the doctors best efforts his body was unable to take the stress and he passed away.

Your timely support ensured that he received the best medical care. The funds have been utilized for his medical expenses so far. Please do pray that his soul finds peace. I thank you for all the support you have shown towards Bedbyas Badi.
Donate
OR

Scan & donate with any app
check_circle_outline Download payment receipt
Report fundraiser
Know someone in need of funds for a medical emergency? Refer to us
Rs.4,665 raised

7 Supporters expand_more
This campaign has stopped and can no longer accept donations.
$150 Million +
Raised on Milaap
Are you in need of financial support for medical or personal emergencies, or a social cause?
Start a fundraiser
Or
Know someone in need of funds for a medical emergency? Refer to us
Campaign organizer contact_mail
KP
Kavita Pokharkar
Beneficiary: Bedbyas Badi info_outline

Donated to this campaign via Bank transfer/QR Code? Click here if you can’t find your donation listed below.
A
Anonymous donated $5

I lost my father bcs of pancreatic cancer I know how much it cause pain to the person and family... He is a father of daughter like me will pray for his recovery soon and live a happy remaining life with his family..

Donated to this campaign via Bank transfer/QR Code? Click here if you can’t find your donation listed below.
A
Anonymous donated $5

I lost my father bcs of pancreatic cancer I know how much it cause pain to the person and family... He is a father of daughter like me will pray for his recovery soon and live a happy remaining life with his family.. 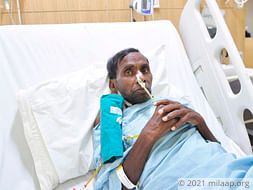 Only A Surgery Can Save 62-year-old Bedbyas From Cancer