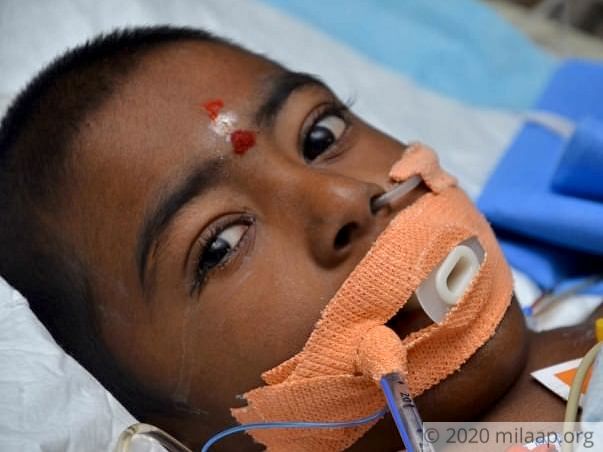 Before he became sick, my son Barathraj loved evenings the most on a typical day. He went out and played with his friends for hours. But one evening last December, his laughter was replaced with cries of pain as he fell and hit his head on the pavement. His mother and I thought it was a small head injury at first, but later realised that he had a blood clot. We rushed to Sri Ramachandra Hospital, Chennai from our village for better treatment. I never imagined that my playful son would wind up in the ICU with his body in shock and with a dozen tubes covering his small face.

From there, everything went downhill for us. Barathraj was given medicines to prevent fits, which ended up giving him rashes. His whole body was filled with red spots and I remember my wife’s scared face clearly. The doctors told us that his liver was weak and gave him more medicines. I had a bad feeling about his worsening health, but tried to put up a brave face in front of my family. And then something worse happened.

My boy, who could not bear a small cut on his finger, is very sick now

He started vomiting and developed a fever. We took him back to Chennai, where doctors gave us a shock when they said his heart had stopped functioning properly.

I had never seen my son so sick before. No parent can bear to see their child being supported by the ventilator, but I told myself that I would do anything to make him alright, especially when the doctors told me that he might need ECMO support if there is no improvement despite the medicines.

I have never felt more helpless as a father

We even had to leave our nine-year-old daughter in the village with her grandmother, but she put on a smile for us and told us she wanted to see her younger brother healthy again. The whole village is rooting for his recovery, as it is only because of my friends and family there that I was able to get Barathraj to Chennai for treatment.

But I already have spent more than 2 lakh - an amount I can’t even dream of making in my lifetime - on his treatment so far. The doctor says he will have to remain in the hospital under intensive care for 3 to 4 weeks more. But I can’t afford it any longer.

All Barath consumes now is milk, fed to him through a tube. When he asks me whether he will be all right, I tell him that he doesn’t have to worry as the doctors will take care of everything. He calms down when I say that, but the truth is I have no money. If something happens to my son, I will not be able to forgive myself.

Only 3 to 4 weeks of intensive care in the hospital can save Barathraj. Being a daily wage labourer in a remote village in Tamil Nadu, I cannot raise Rs 15 lakh required for the treatment. If you help us, an entire village – that is waiting for us to come back as a happy family - will be thankful to you. 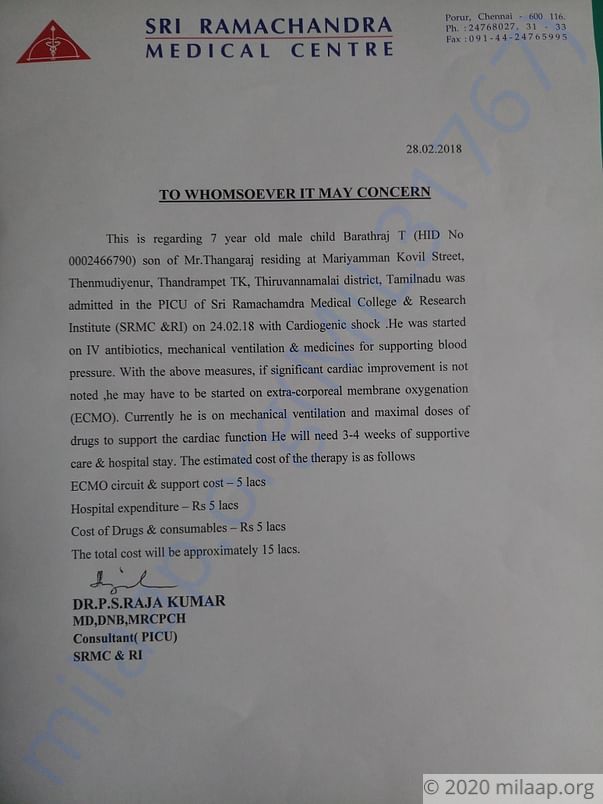 Thank you all for your tremendous support. We wouldn't have come this long if we didn't have your support.

Barathraj is doing well now. He will be discharged in a day or two. The doctors have advised a steroid treatment for about 2 months to help him with his energy and strength.

He will undergo a cardiac MRI post his discharge to rule out any complications. The doctor will be seeing him in a week's time post which, he will have to go for a monthly follow up checkup for the next 3 months. During this course of time, he will be on medication which will also include oral antibiotics for the prevention of bacterial infections.

There is no change in Barathraj's diet. But he's advised to take rest for about 2-3 weeks and not to strain too much and lift heavy weights

It's really heartening to see our little boy relieved and happy again.

To all those who donated for Barathraj's treatment I thank you all from the bottom of my heart.

There has been improvement in his condition. He did not require initiation of ECMO and he showed improvement on mechanical ventilation itself. He is being treated with other supportive medications to improve the function of his heart. His echo has showed some improvement in cardiac function.
He will require another 3 days of stay in the intensive care and a week stay in the ward.
The cost estimate for his complete treatment including medications will be around 5 lakhs.

We still need your support, please keep him in your prayers.

Report fundraiser
See how thousands are crowdfunding for their causes on Milaap
Rs.75,866 raised

Donated to this campaign via Paytm? Click here if you can’t find your donation listed below.
S
SMK donated Rs.1,000

May Allah bless him a

Our prayers to the Almighty Lord Jesus Christ for the speedy recovery of the Child.

Donated to this campaign via Paytm? Click here if you can’t find your donation listed below.
S
SMK donated Rs.1,000

May Allah bless him a

Our prayers to the Almighty Lord Jesus Christ for the speedy recovery of the Child.

DR
You are sending a message to
Dr. Rajkumar
Go back 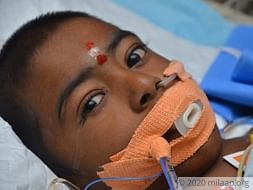