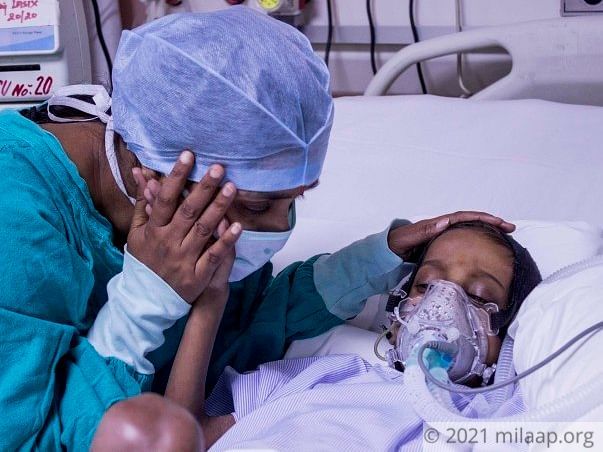 Share
“Mumma, darr lag raha hai. Itne saare machines hai. Dard ho raha hai!”
6-year-old Ayush keeps repeating this lying in the ICU hooked to scary looking monitors, constantly hearing beeping noises. He is so weak that he cannot even move his fingers to hold his mother’s hand. So, she holds it tight. She comforts him that if he fought just a little more, through this treatment and surgery, she promises to take him out of the hospital, and back home to Patna.

The cure failed, plunging an entire family into an endless nightmare

“He bounced back so soon after the first transplant! He would play with our daughter in the hospital. I’d to control them so much because I was afraid he would get hurt or catch and infection. All was back to normal until mid-Jan. He got weaker. Tests showed that his platelet count was dipping instead of increasing.”

Ayush is running out of time, and his parents know it

Manju and Sunil could not believe it when they heard that the transplant seemed to have failed. Ayush needed another transplant. When a child gets a bone marrow transplant, his old defective bone marrow cells are killed with chemo, and then new cells are introduced. Rarely, the new cells fail to produce blood, leaving the patient with no other option but to repeat the treatment. Since the body completely stops producing blood, the patient has very little time to get the surgery, before the disease kills him.

With no income, no more rainy-day fund, this has become a race for survival

“We had to wait till March to see if he improves. After March, he just got worse. He went into septic shock from infections and we rushed him into the ICU. He could not eat, move or breathe. He was on the ventilator. Now, I can feel my son slipping away. The doctors are prepping him for this transplant. Once his breathing improves, we have to get him into surgery.”

The family has spent about Rs. 25 lakhs until now. Manju is by Ayush’s bedside along with their 8-year-old daughter, while Sunil is out looking for financial help. They are struggling even to buy food and water. Neither of them can go to work, nor do they have family in Delhi. Ayush is running out of time. His critical situation warrants an urgent transplant.

“We came here in October 2017. We have not gone home since. My husband’s business is gone. He sold it for the first transplant. Our relatives have done enough. We don’t have anywhere else to go for an additional Rs. 20 lakhs. We named him Ayush. He deserves a long life!”

Manju is in tears, crying to anyone who can listen. She had two miscarriages and three surgeries before giving birth to Ayush and his sister. Now, she is afraid God will take her child away from her again.

Your contribution can free Ayush from this pain and can give his parents new-found hope.

Donate
0%
Be the first one to donate
Need Rs.2,000,000
Card, Netbanking, Cheque pickups
Or Donate using