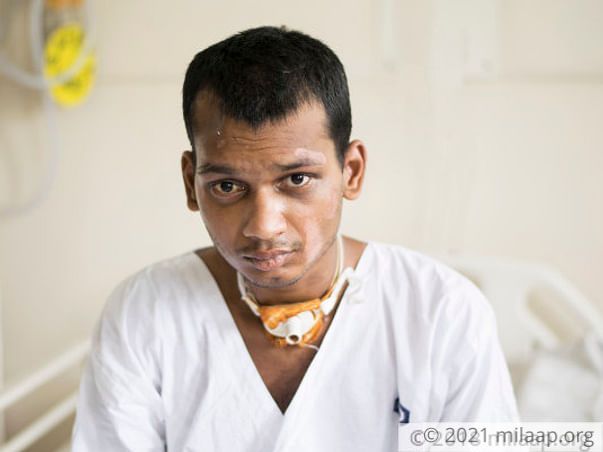 “He was on his bike – buying things for the shop. A person ran in front of his bike and he swerved to avoid him. He hit a bus and fell on the railing and had a head injury. From then, it has been one complication after another for Atindra.” – Rajkumari, Atindra's mother.

Atindra has not spoken in the last two months. Even when tries to speak only air comes out of his throat. A big part of his skull still needs to be replaced in his head. But most urgent is the removal of the tube in his throat. The accident has left a ripped the life of this young man apart, and his family has no funds left for treatment.

Atindra's father Manoj has a small grocery shop in Calcutta. Whatever he earns at the shop is sent back to his family back home in Bihar. Atindra, the oldest decided to come and help his father at the shop after his class 10. On the day of the accident, he was going to the wholesale market to purchase goods for the shop.


“The people on the road took him to the hospital. His head was swollen and they removed a piece of his skull. He had a tracheostomy for breathing support and that has now become a problem. The tube for breathing now needs to be removed to prevent infection. I can work and earn for the skull replacement surgery, but I have nothing to meet this latest emergency.” – Manoj

Atindra when he was rushed to the hospital

Any month, the income from their shop is not more than Rs 4,000. Since the accident, Manoj has borrowed over Rs 5 lakhs. Arranging for the surgery is simply not possible for him. Atindra is still in the hospital recovering from the accident that brutally changed his life. His parents are struggling to come to grips with what happened to their eldest child.


“He is such a nice boy. He watched the shop, talked to his friends on the phone and had recently started going to gym classes to be healthy. Since the accident, he has not been able to speak. He wakes up scared – asking us who we are with his gestures. He needs the tube removed before he can develop a dangerous infection.” – Manoj

Manoj regrets being unable to give Atindra a good education. With a lot of difficulty, he has managed to get Atindra's life out of danger. Atindra needs to take his first steps into a normal life and he needs help doing so. Manoj needs help getting Atindra the surgery that will let him breathe, eat and speak on his own