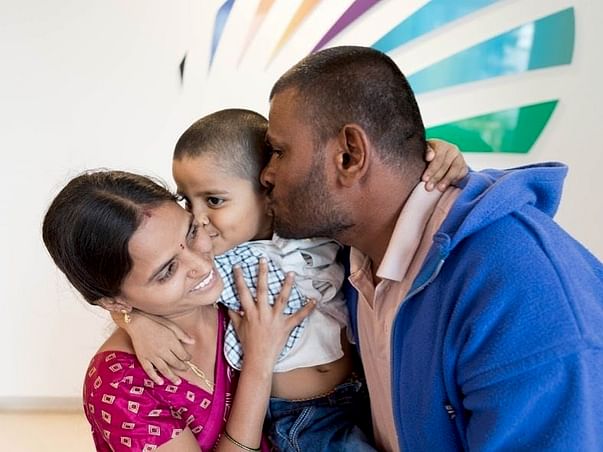 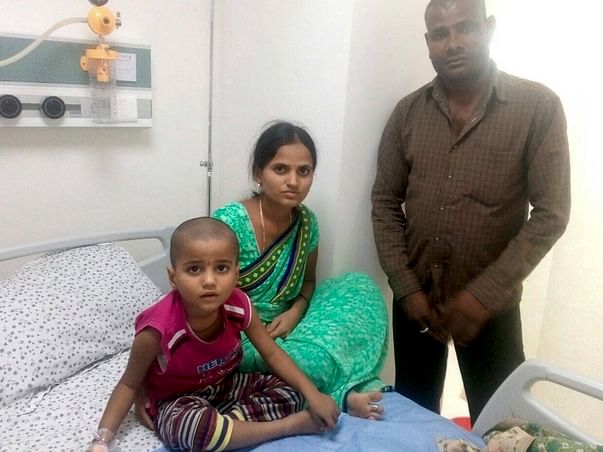 Previous Next
“We don't know how to help him. He’s our only child, we can’t lose him”
Aswak Nenavath is the only child of Raju and Suvarna Nenavath. 3 years ago, when he was barely over a year old, he started crying uncontrollably from stomach pain, his stomach was swollen and he could barely eat. Scared at the condition of his child, Raju took him to a doctor. There he was told that Aswak’s situation was far more complicated than what they thought and that he needs to be taken to a hospital immediately. Upon evaluations, Aswak was diagnosed with Chronic Pancreatitis.
Aswak is too young for surgery but needs constant medical attention
Aswak’s age proved to be a big hindrance in the way of treatment. The doctors almost lost hope, in this case, owing to the fact that he was just a baby. But Raju was adamant about saving his son and brought him to Rainbow hospital in Hyderabad. There, Aswak started receiving treatment for pancreatitis. But his condition was so critical that he needed intensive medical attention and hence was admitted to the hospital.

Over the course of last 3 years, he’s been admitted to the hospital 4 times. Each time his condition is aggravated, he would be rushed to the hospital for medical attention. Although Aswak has been on constant medication since his diagnosis happened, he has barely felt any relief from the constant pain and discomfort his ailment inflicts on him. Now over 4 years old, Aswak still has difficulty in eating and keeping the food down.
All his parents want, is to see their son alive and healthy
“It kills us to see him writhe in pain. Makes us feel helpless that being his parents, we can’t do anything to make him feel better.”
At such a young age, the pain and misery Aswak suffers in intolerable to him and his family. He constantly cries from the pain and his parents can do nothing to make his pain go away.  Raju and Suvarna constantly pray for their only child’s wellbeing and quick recovery, but in reality, there’s only so much they can do to improve his condition.
“We don’t know what we would do without him, we can’t even have more children”
A few weeks after Aswak was diagnosed, Suvarna got pregnant for the second time. 7 months into the pregnancy when she got herself checked, they found out that the fetus hadn’t grown at all, and even if they had the child, he/she would be born with severe birth defects. Not willing to take the risk, and scared of taking the responsibility of another sick child, Raju and Suvarna aborted the pregnancy and decided to focus all their energy and resources on the well being of their only son, despite all odds.
Raju's pocket cannot handle the ever-mounting expenses of Aswak's treatment
What makes Raju and Suvarna all the more helpless is their financial condition. Raju works as a daily wage laborer and doesn’t make more than Rs 6000 a month. Within this meager income, Raju has to take care of his joint family of 6, which includes his parents and younger sister. Adding to the misery, his younger sister is of marriageable age and the family is looking for suitable matches for her. This pressure of handling family responsibilities, while taking care of his ailing son, take a toll on Raju’s life.

Neck-deep in debt and out of resources to save Aswak
Suvarna is a homemaker who needs to take care of Aswak all the time. Although she learned to tailor and added to the family income, Aswak’s condition doesn't leave her with any spare time or energy on her hands and she’s forced to witness her son’s suffering in misery. So far Raju has loaned and spent over Rs 7.5 lakhs towards Aswak’s treatment and now he’s at a loss of means to provide treatment to his son, which is way more expensive than what he can afford.
How you can help
Aswak needs intensive medical attention till he turns 14, after which he needs to undergo a surgery that will finally cure him of pancreatitis. Raju and Suvarna are prepared to do everything it takes for their son to be healthy again, but their dream can only be realized if they get help from us.
Your contribution can give Aswak a second chance at life.

UPI: rzpy.givetomlprajunena001@hdfcbank (Copy to clipboard)
Or
Click here to read the instructions before you make a bank transfer. 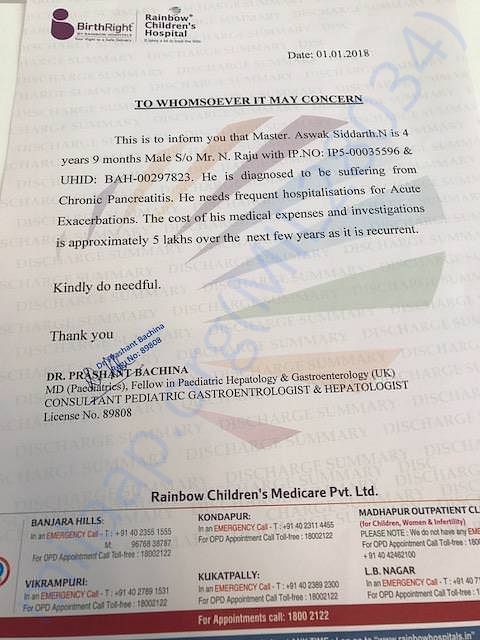 UPI: rzpy.givetomlprajunena001@hdfcbank (Copy to clipboard)
Or
Click here to read the instructions before you make a bank transfer.

We wish to update you that Mast. Aswak Siddarth N got admitted for Acute Pancreatitis and discharged active, afebrile and hemodynamically stable.

Thank you all for the tremendous support.

We wish to update you that Mast. Aswak Siddarth N got admitted for treatment of Pancreatitis and discharged active, afebrile and hemodynamically stable.

We wish to update you that Mast. Aswak Siddarth got discharged after undergoing treatment for Acute Febrile Illness.

Thanks for the continuing support.

Report fundraiser
See how thousands are crowdfunding for their causes on Milaap
Rs.145,796 raised 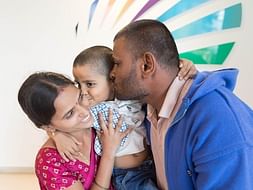