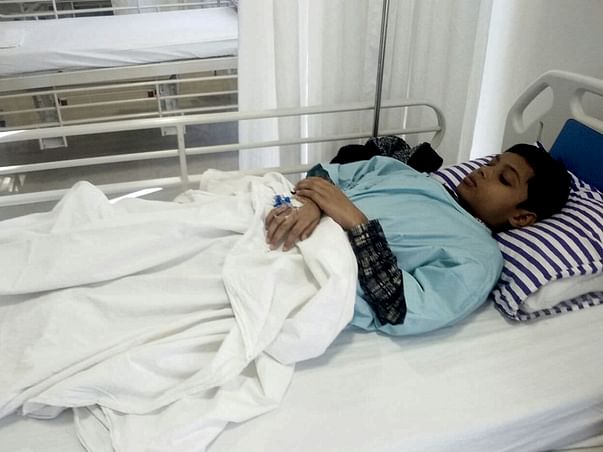 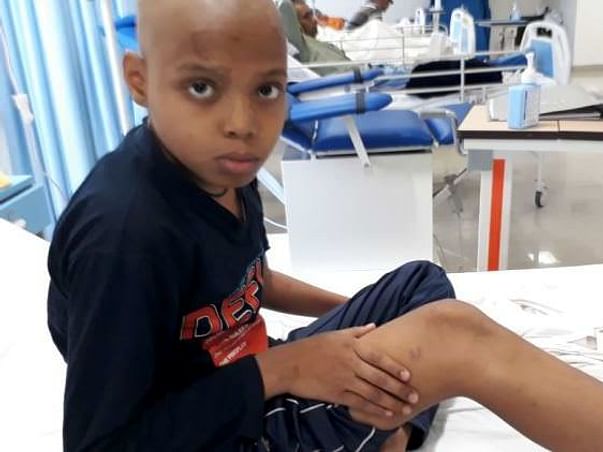 10-year-old Anshu returned home with a bruised knee one day. He often played cricket with his friends in school, and for him falling was just a part of the game. This time, however, was different. Anshu’s parents noticed that he complained of extreme pain even days after the fall. His father, Balkrishna, then took him to the doctor. They were then told that Anshu has bone cancer. He is now fighting for his life and needs surgery at the earliest to survive.

The Disease That Changed Everything

Anshu has been diagnosed with Osteosarcoma, an aggressive form of bone cancer that tends to occur mostly in children and young adults. He has already completed one cycle of Chemotherapy. However, Anshu also needs a limb surgery and another four cycles of chemotherapy post the surgery.

10-year-old Anshu’s life changed overnight. One day he was going to school and playing, and the next, he was in the hospital being told that he has cancer.

“Anshu is a very good student. He always worked hard and did well in his studies. We were in the hospital for his treatment when the school principal called us to tell us that Anshu had topped his school in his exams. He should be celebrating his achievement, instead he’s in the hospital fighting for his life," his father says.

Anshu with his brother and sister.

Anshu’s parents took him from their home in Bihar to Kolkata for his treatment. He is away from his home, family and friends. He is too young to understand the seriousness of his illness, and often asks his father when he can go home to his brother and sister.

“I can’t tell my son that he’s fighting to stay alive. I keep telling him that we’ll take him home as soon as his treatment is complete. Without the surgery and chemotherapy, I’m not sure if he’ll ever get to go home.”

Anshu with his mother.

Anshu’s Father Is Desperate to save him

Balkrishna is a daily-wage worker and the only earning member of the family of five. In addition to paying for his children’s school fees, he must now pay for Anshu’s expensive treatment. They have rented a small room in Kolkata where he and his wife stay with Anshu.

Anshu with his father.

“He’s my son and I will do anything I can to help him, but we’re a very poor family. I can’t afford the amount required for his treatment. I watch him in pain every day and I feel very helpless. I hope and pray we can pay for his surgery and it will ease him of his pain.”

Although Balkrishna has got by so far by borrowing little from family and people from his village, the surgery and chemotherapy estimated to cost Rs. 7.5 lakhs, is an amount out of his reach.

Anshu’s surgery is scheduled for 20th January 2018. His chemotherapy treatment will continue till the surgery, and resume post-surgery. This is the only cure for his cancer. If he's unable to undergo the surgery, Anshu’s cancer is likely to spread at a rapid pace.

How You Can Help
Anshu is battling severe bone cancer and needs a limb surgery and chemotherapy to survive. The surgery and therapy are estimated to cost Rs. 7.5 Lakhs. His father, Balkrishna, is desperate to save him, but can’t afford to pay for the expensive treatment. Anshu’s surgery has been scheduled for 20th January 2018, and the family needs to arrange for funds before that.

Your support will save Anshu and give him the life he deserves. 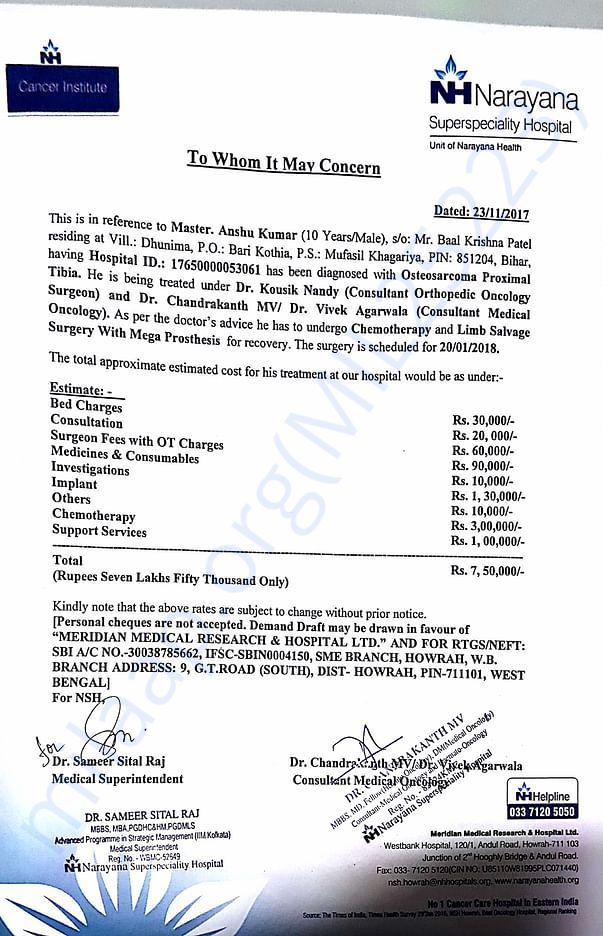 Scan & donate with any app
check_circle_outline Download payment receipt
Report fundraiser
Know someone in need of funds for a medical emergency? Refer to us
Rs.112,465 raised

Donated to this campaign via Bank transfer/QR Code? Click here if you can’t find your donation listed below.
A
Anonymous donated Rs.50
AT
ASHISH donated $25

Donated to this campaign via Bank transfer/QR Code? Click here if you can’t find your donation listed below.
A
Anonymous donated Rs.50
AT
ASHISH donated $25 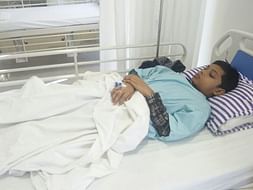