This 13-Year-Old With Completely Damaged Liver Fears Death | Milaap
This is a supporting campaign. Contributions made to this campaign will go towards the main campaign.
This campaign has stopped and can no longer accept donations.
Milaap will not charge any fee on your donation to this campaign. 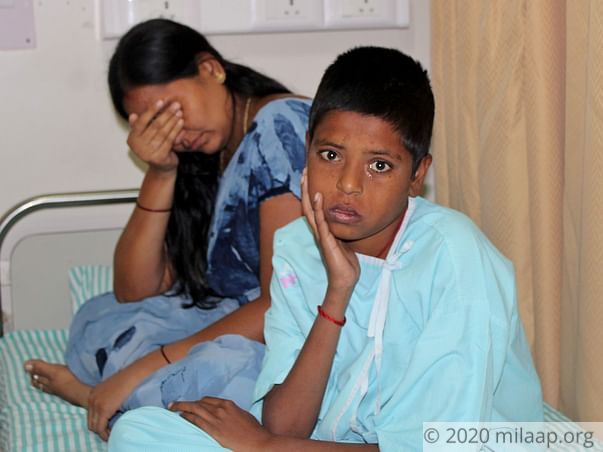 13-year-old Harshavardhan has spent most of childhood sitting in the verandah of his home watching other kids play cricket. He wants to play with them, run like them, but his failing liver has never allowed him to do so. Just after a minute or two of walking, he would fall on his knees holding his stomach and groan in pain. Yet that never stopped him from spending quality time, chatting and laughing with his brother Vivek (12) and his parents Sumathi and Murali. He found his happiness and his constant support in his family. But now, his parents feel helpless as they can't afford a liver transplant that can give him a new life.

With timely medication, his parents could keep Harshavardhan's condition from worsening all this while. But now even the medicines are not helping him. Now, Harshavardhan lives in constant fear that he might lose his life. His liver is slowly deteriorating and now he can only recover with a liver transplant.

Harshavardhan was just 40 days old when he was unable to pass stools. When his parents took him to the hospital, the doctors assured them it was nothing serious and said that he would get better after sufficient exposure to sunlight. But much to their concern, despite their efforts, Harshavardhan didn’t get any better. The local doctor suggested them to take him to Bangalore, Karnataka for better consultation. After going through few tests, Harshavardhan was diagnosed with cirrhosis, a serious degenerative disease because of which the liver fails to function as it should.

After the diagnosis, the doctor asked the parents to take him home saying he cannot survive for more than 5 - 6 months. But Murali and Sumathi didn’t lose hope. After a lot of research and asking opinions from peers, they finally found the answer in NH, Bangalore. As he was too little to undergo a transplant, the doctors asked them to wait and gave medicines to keep his condition from worsening.

With his health deteriorating, he can only survive with a liver transplant

Harshavardhan’s condition is worsening and the medicines that he was given are not helping him. His stomach started swelling up because of which he gets pain in his stomach. He even bleeds from his nose which doesn’t stop until he’s given medication. All the pain and suffering that Harshavardhan is going through can only end with a liver transplant.


“My son is going through a lot of pain. He doesn’t say it to me, but I can see it in his face. He is scared and sad and most of the time he lies in his bed holding my hand tightly. He’s already been through so much since he was a baby and now I cannot see him go through any more pain. He needs a liver transplant and I’m the donor for him. But I don’t have any funds for the transplant.” - Murali, father.

Murali is a farmer who earns a meager income of Rs 400 per day to look after his family. He has been struggling to look after Harshavardhan’s treatment and even sold his tiny piece of land to pay the hospital bills. Now as his son needs liver transplant, he has spent Rs 2 lakhs just for his medicals tests by taking help from others. He has even stopped working for the past one month and is staying with Sumathi and Harshavardhan in Bangalore waiting for his son's transplant.

“In such hard times, we have no one to seek help from and we have no money left to even afford a proper meal for us. He needs a transplant that costs Rs 16 lakhs to recover and I can’t afford it, and without the transplant my son will lose his life. I need your help to save my son.” - Murali, father

How you can save Harshavardhan’s life 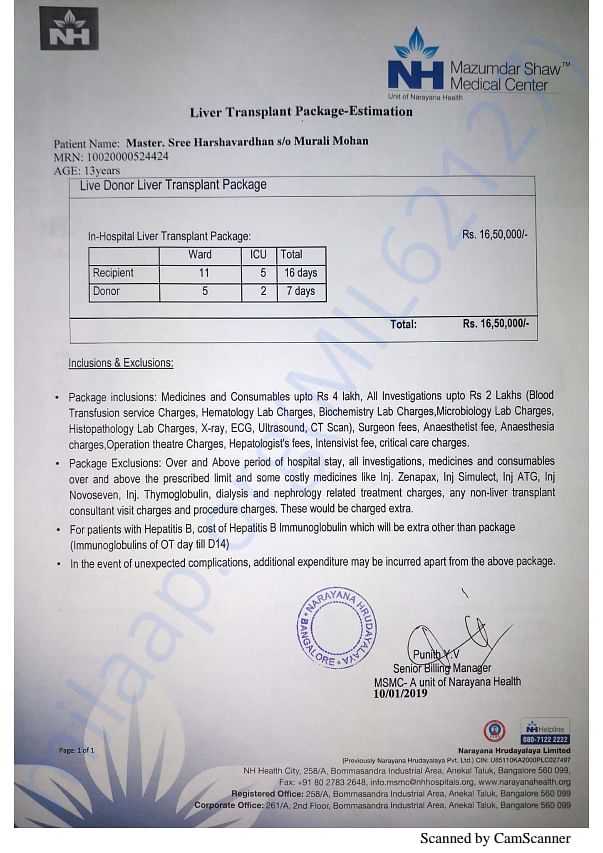 Harshavardhan is no more with us. He was undergoing his treatment but his health deteriorated and he couldn't make it.

Funds raised will be utilized to clear his medical expenses.

You are sending a message to
Sowjanya Leela Kumar
Go back 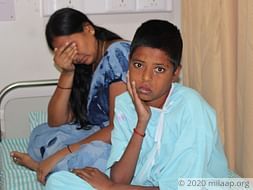