Family Refuses To Help This Laborer Save His Son's Failing Heart | Milaap
This is a supporting campaign. Contributions made to this campaign will go towards the main campaign.
This campaign has stopped and can no longer accept donations.

Family Refuses To Help This Laborer Save His Son's Failing Heart 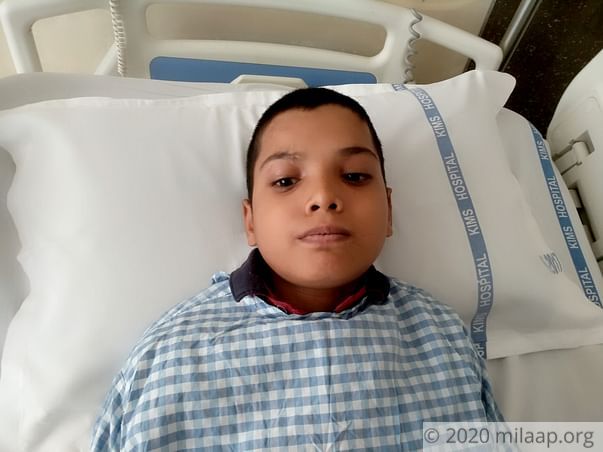 “Moving out to a new city with the family was difficult, but we have to do it for Aftab. He seems to look fine but he is dying inside. If the block in his valve is not removed, blood might flow backward to the heart and prevent the blood flow to other organs. My relatives refuse to help me, because nobody understands how critical his condition is. We are not educated. I can't bear to think that death is close to him. He might die any moment without a heart surgery." - Umar, Father.

Umar earns Rs 200 per day, with which he feeds his family

Umar and Shahnaz had their happy family in a small village in UP. 6 years ago, Umar moved to Hyderabad to support his family better. In UP, he used to work in farms where he could barely earn Rs 100 per day. In Hyderabad, he works as a parcel carrier and manages to earn Rs 200 per day.

Although Umar had been in Hyderabad, Shahnaz and his twin sons Aftab and Mehtab were managing their lives in UP. The two of them went to school and were living a normal life like any other children of their age. The kids who were once inseparable are now forced to spend different lives. While Mehtab continues to live a normal life, for Aftab it’s only a distant dream to do things his brother does.

Nobody could imagine that too much sweating could turn dangerous

1 month ago, Umar observed that Aftab was sweating all the time regardless of the temperature. When he was taken to the doctor the father couldn’t believe what he heard.

“I took him to the doctor because he was sweating a lot frequently without any physical activity. I had no idea this could be so serious. They told me he has a bicuspid aortic valve with stenosis. It means his major blood vessel is blocked, 80% of his valve is blocked, reducing blood supply to his whole body.”

Aftab will not survive long without a surgery, he is running out of time

Although the child has barely any symptoms of his failing heart, from within he is dying gradually. Initially, even the parents failed to understand the crux of the ailment. The problem for Aftab is his health is highly unpredictable. One moment he can be fine and the other moment, he can simply stop responding. If the heart surgery is not done urgently, he might just collapse and lose his life any moment.

Umar has to struggle even more with Aftab because Shahnaz is too sick to take care of their son. Shahnaz is a housewife and has severe liver problems. To add on, she has recently been operated for gallbladder stones. She can hardly do any work, let alone taking extra pressure.

Shahnaz has also been slipping into mild depression because she can’t believe that as a mother she can’t even take care of her son. She knows he is sick but I have not told her how serious his condition is.

It was very difficult for Umar when he had to leave UP. He could hardly get work there and the family struggled to even afford 2 square meals a day. After he moved to Hyderabad, he managed to afford food for his family. Yet, affording such a surgery for his son is far-fetched.

"I was forced to move my entire family here to Hyderabad for the treatment. They are having a hard time adjusting to the new city. Mehtab even had to drop out of school because we cannot afford the fee. Nobody says it out loud, but we all sit and cry in our corners when people are not watching."

Aftab’s failing heart is silently killing him. His father Umar has exhausted all funds to save his son. His family has denied help as they are ignorant about this disease. The cost required for his surgery is Rs 2 lakhs and without help, Aftab will not make it.

“For the past 1 month, I have struggled a lot to gather funds to afford my son’s treatments and medicines. I have already spent Rs 30,000 and all of which I had to borrow. I have taken loans from private money lenders at a very high-interest rate which is very difficult for me to repay. I don’t know how will I manage the cost of Aftab’s surgery. But if I don’t do it, he will die.” 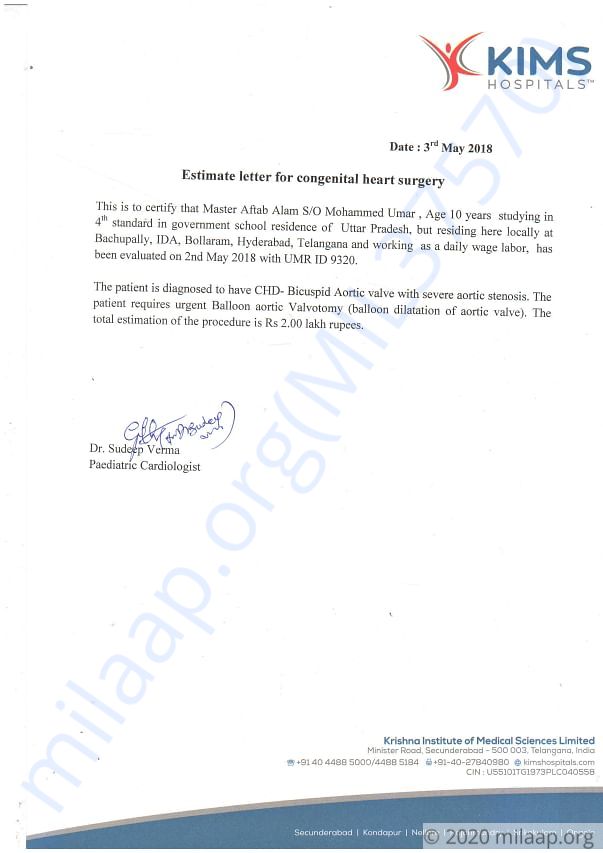 Thank you everyone for you love and support.

It gives us immense pleasure in informing you all that Aftab successfully underwent the surgery and has been discharged now. He's doing well and is active. The doctors have prescribed medicines and he will continue to be on medication until advised otherwise. Also, there will be regular follow ups with the doctor so they can monitor his health closely and check for any irregularities.

We are all hopeful about his recovery. Please keep praying for him. Thank you once again!

Regards,
Goutham
Donate
Report fundraiser
See how thousands are crowdfunding for their causes on Milaap
Content Disclaimer: The information and opinions, expressed in this fundraiser page are those of the campaign organiser or users, and not Milaap.
If such claims are found to be not true, Milaap, in its sole discretion, has the right to stop the fundraiser, and refund donations to respective donors. 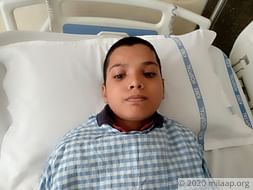 Family Refuses To Help This Laborer Save His Son's Failing Heart