Mother Struggles To Save Her 10-Year-Old From Eye Cancer | Milaap
This is a supporting campaign. Contributions made to this campaign will go towards the main campaign.
This campaign has stopped and can no longer accept donations.

Mother Struggles To Save Her 10-Year-Old From Eye Cancer 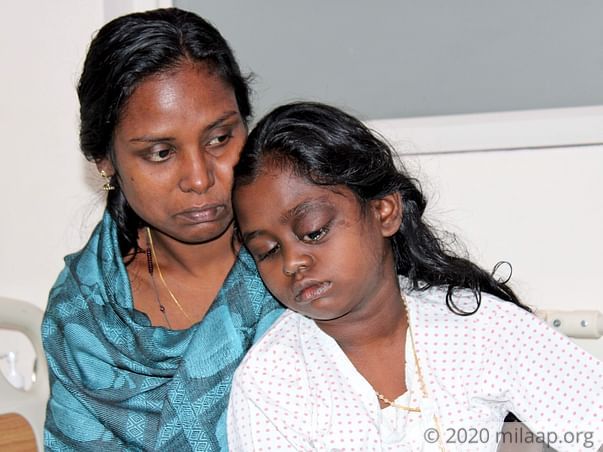 “One more spoon…just have a little more,” says Kavitha as she tries to feed her daughter Athulya some rice congee. Athulya has been refusing to eat properly ever since she was diagnosed with eye cancer and admitted in the hospital last month. She just wants to lie down on her Amma’s lap, listen to her sweet lullabies while waiting for sleep to take her pain away.

Ever since her husband, Satheesh, met with an accident 12 years ago that made him unfit to go to work, Kavitha has been single-handedly running her household and raising her kids, Athulya (10) and Athul Krishna (7) by doing many odd jobs – from tailoring to being a domestic maid.  The children have always depended on their mother for everything, especially Athulya, who thinks that there is no problem that her mother cannot solve. She believes that Kavitha will find a way for cancer ‘to leave her eye alone’. But unfortunately, the truth is that Kavitha is running out of hope and money to get her sweet daughter treated.

“How can a simple insect bite make my eye so huge, Amma?”

Ever since she learnt to speak, Athulya has always been a chatterbox. She would keep asking her mother questions about everything and anything. Kavitha often found herself falling behind in keeping up with her little one’s energy. Two months back, when Athulya’s left eye started swelling unusually, Kavitha believed it may have been due to dust or an insect bite. But when it didn’t go away even after a couple of days, Athulya had many questions: How can my eye become so big because of a simple insect bite?  Why does it hurt so much? Will medicines make it better?

Kavitha did not have any answer then. But after taking her to a good hospital in Bangalore from their hometown of Mannuthi in Kerala, she was shocked to learn that Athulya had been diagnosed with Ewing’s Sarcoma, a deadly cancer.

Kavitha had an erratic work schedule – before the clock struck 7 am, she would have to get on a school bus to ferry young kindergarten children to a school near her house. As soon as that shift got over, she would run to a few neighbourhood houses, where she dusted and cleaned until noon. And after that, she would do some tailoring at home while also caring for her husband. All this has been disrupted now after her daughter fell sick and became admitted in Bengaluru.

Being out of income has hit her hard financially, but what hurts Kavitha most is the fact that she had to leave son Athul Krishna and her husband back at home.“We have never been apart in all these years. I miss them and know that they will be having a hard time without me, but what is important now is my daughter’s health. I have resolved to take her back home healthy, so I am just focusing on that now,” says Kavitha, holding back her tears.

How You Can Help Athulya

This brave girl may be physically weak now due to the impact of strong cancer medicines on her body, but she is not letting cancer weaken her spirit. She tells her beloved mother, “Amma, I will be alright soon” every day when she catches her crying. This is what gives Kavitha the impetus and strength to fight for her daughter’s sake. She was able to get her treatment started with the help of Athulya’s schoolmates who have been kind in helping out. But money is running out – on medicines, tests and food – and Kavitha cannot keep up.

Your kind contribution can help this strong mother save her daughter 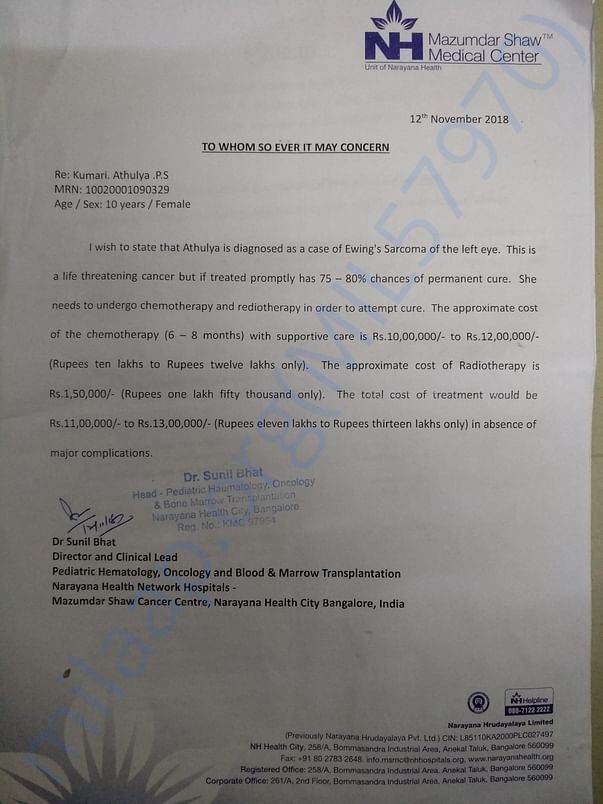 Athulya is recovering well. She came to the hospital for daycare admission for vaccination.

Athulya is doing well. She came to the hospital for doctor follow-up and consultation.

Athulya is doing well. She came to the hospital for consultations.

You are sending a message to
Abhilash J
Go back 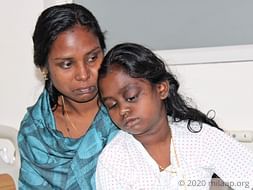 Mother Struggles To Save Her 10-Year-Old From Eye Cancer