Help Dr. Swapnil Mane Treat Poor Cancer Patients for Free | Milaap
This is a supporting campaign. Contributions made to this campaign will go towards the main campaign.
Milaap will not charge any fee on your donation to this campaign. 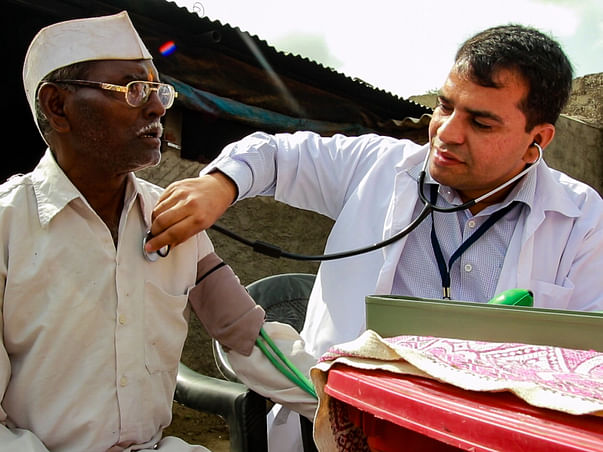 Aai, I will become a doctor when I grow up and cure people without money,” promised 8-year-old Swapnil Mane to his mother, as he helplessly watched his poor neighbour die of cancer. Twenty five years later, this onco surgeon and his wife have helped thousands of cancer sufferers in Ahmednagar district of Maharashtra and have operated on 1120 cancer patients for free. Twenty five yeaars ago, an 8-year-old boy tugged at his mother:
“Aai (Mother), I want to help Godse Kaka!”
“But how can we help Swapnil? Baba (Father) does not earn so much that we can help him monetarily, or else we would have.”
“But Aai…Why don’t the doctors help him and cure him?”
“Doctors cure only those who have money, Swapnil.”
The last line uttered by Swapnil Mane’s mother gave him his mission in life.
He was watching Godse Kaka die every day. He was watching Godse Kaku cry every day. Godse Kaka was Swapnil’s neighbour. He was a daily-wage worker at a farm. He earned about Rs. 50 to Rs. 60 per day. And now, not even that, due to his disease.
“Aai, I will become a doctor when I grow up and cure people without money too!” Swapnil promised his mother.
Swapnil eventually came to know that Godse Kaka was suffering from lung cancer, and just because he did not have Rs. 50, 000, he had to die. So now, Swapnil was determined to become a cancer specialist and fight against cancer.
On May 1, 2011, Dr. Swapnil Mane (MBBS, MD, DGO, FCPS, MD—Oncosurgeon) started the journey towards fulfilling his dream of making cancer treatment affordable and even free if necessary for the needy in India. He inaugurated the Dr. Mane Medical Foundation and Research Centre, a national, social, secular NGO which stands committed to cancer control, at town Rahuri, district Ahmednagar, Maharashtra. The Foundation is one of the few medical foundations in India, which has been recognized by the Scientific and Industrial Research Organization (SIRO), Department of Science and Technology.
Doctor Mane, along with his team has so far conducted 101 free cancer check-ups and medicine distribution camps in villages of Maharashtra and screened 50,000 people for detection of cancer, under a community-based cancer project.
“Prevention is an essential part of our mission. Through public education, clinical preventive services and research, we strive to reduce the incidence of cancer and serve people who may never be our patients,” says Dr. Mane
However, all that glitters today was not gold always. Not being financially very sound, Dr. Swapnil Mane joined the Tata Memorial Hospital at Mumbai (the same place from where he had graduated), as a fellow in gynaecological oncology. He started his career with a vision to just cure the patients without looking at their financial status. But, one day, Dr. Swapnil met a patient in the lobby of the hospital. He looked pale and worried. When Dr. Swapnil asked him the reason for his sadness, he said that he was a cancer patient and only had money to come to Mumbai. Now he did not know how he would be able to pay the hospital bills and go back to his village.
“I gave the patient some money and also found an NGO to sponsor his fees. Once his treatment was done I gave him money to go back home. He was happy; however this was the moment when I decided to practice in a village rather than in a metropolis like Mumbai,” recalls Dr. Mane.
He was pained to see patients who came from villages sleeping on the footpaths of Mumbai just because they did not have money to rent a place in the city till their treatment was done. He then started his research and found out that his own town, Rahuri, had no tertiary health centre available in and around 50 km. He was shocked to know that the doctor ratio in this area is 1:50,00 (the national average doctor-population ratio is 1:1,700). Also, there was no medical institution or health centre that had a diagnostic facility for cervical cancer, in spite of the fact that one in every 100 women in the area was affected by cervical cancer.
After his initial research, Dr. Mane decided to start practising in Rahuri, and that too at half the cost compared to other doctors. As a result, patients started flooding into Dr. Mane’s clinic. This became, however, a matter of worry for other doctors at Rahuri. The doctors association there generated a notice against Dr. Mane to stop his charitable work. But, in spite of all the objections, Dr. Mane was determined to help the people in this area. His wife, Dr. Sonali Mane, stood steadily by his side in this difficult time and they both continued to diagnose and treat patients, taking negligible fees. Slowly, even the few doctors who were opposing the couple, joined them instead. These doctors then started their project in a rented building, and thus the
Dr. Mane had rented a 15 bed hospital to carry out his practise. However, carrying on all this work in a rented place was difficult and hence, on August 8, 2015, the Dr. Mane Medical Foundation and Research Centre started its own charitable hospital called Saidham.
How Can You Support Dr. Mane
Dr. Mane Foundation needs your support to conduct free medical camps in rural areas and provide free surgeries for poor and needy patients at Saidham hospital. Currently the Dr. Mane is struggling to arrange funds to treat 57 identified cancer patients. The hospital also needs medical machinery like a sonography machine as the patients need to go to Pune, 160 kms away, to get their sonography done. The hospital also needs more man power to carry out cancer detection camps across different villages.
Your support will ensure that the poor cancer patients in rural India get a chance to survive.

UPI: rzpy.givetomlpdrmaneme003@hdfcbank (Copy to clipboard)
Or
Click here to read the instructions before you make a bank transfer.

The funds contributed till date has benefited 52 cancer patients so far.
We are going to use these funds for the chemotherapy of the patients and their general  treatment expenses.

We sincerely thank you for your continued support for this noble cause.

The funds raised will be used for cancer patients treatment, it will be utilized so the patients can undergo chemotherapy.

we will  utilize  this amount for poor and needy cancer patients. 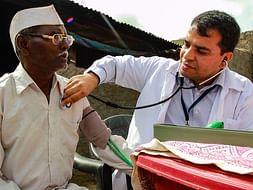