Single Mother Cannot Afford The Life Saving Transplant For Her Son | Milaap
This is a supporting campaign. Contributions made to this campaign will go towards the main campaign.
This campaign has stopped and can no longer accept donations.
Milaap will not charge any fee on your donation to this campaign. 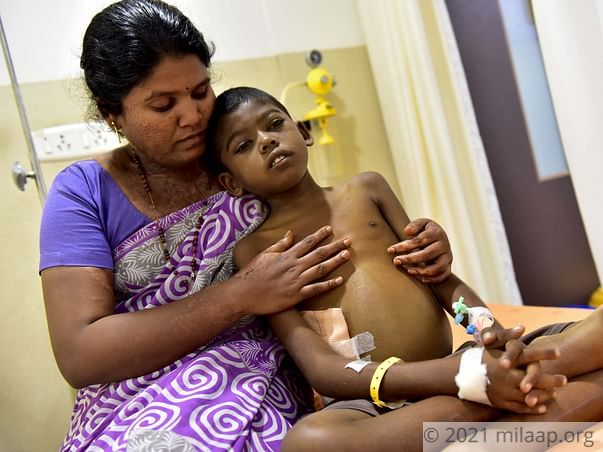 Shanthi had always endured a lot of pain and hardhsip for her children. Everything she did was to protect them from the abuse of her alcoholic husband. But one day, the unimaginable happened – her husband, heavily intoxicated, came home and started a fight with her. During the fight, enraged, he threw kerosene oil at her and set her on fire. She suffered severe burns from the neck below. Shanthi fought back the terrible pain and trauma, determined to be strong for her children. However, shortly after the tragedy, her older son, Arul, was diagnosed with a severe liver disease. Shanthi is shattered. Just when she thought their lives would be ‘normal’ for once, his grave diagnosis brought their lives to a standstill. Arul’s liver has completely failed and he won’t live for long without a liver transplant. Unfortunately, Shanthi is completely helpless.

Arul had persistent jaundice since he was 2-year-old. The local hospital continued to prescribe medicines for him. Four months back, he suddenly threw up blood and became very weak. Shanti took her to Government hospital in Kanyakumari, he was admitted for a month and the tests reports confirmed that his liver has failed completely. The doctors suggested to take him to a hospital in Coimbatore. In a matter of few days, his condition deteriorated. His eyes are deep yellow now, he throws up everything and he can hardly get up from the bed. The fluid accumulation in his stomach causes him unbearable pain and does not let him eat anything. Last week, the sodium level in his body was drastically reduced which disturbs the brain function.


"He started shouting in pain and suddenly started talking incoherently.  I did not understand what was happening to him. In the blink of an eye, he ran to the road. He was crying and shouting, asking people to help him.  Fear of death has completely consumed him. A passer-by gave him Rs 100. I stood numb seeing all this. Everyone pulled him and he was taken to Emergency room. He became normal only the next day. I don't know what else I'm destined to see in this life." - Shanthi.

Arul's condition is very critical and only a liver transplant can save his life. His mother will be his donor. Back in his village in Virundhunagar district Tamil Nadu, Arul has a lot of friends. He is quite popular in his school because of his sense of humour. He used to be mocked for his swollen stomach, (his stomach was lightly swollen for 2 years) but he easily made friends with everyone and eventually they stopped making fun of him. Now, his friends and teachers pray for him every day. Shanthi recently found out that one of his classmates innocently had told him that he will not survive without the transplant. Arul has stopped talking since then. Now all he thinks and speaks about is the transplant which his mother cannot afford.


An old photo of Arul

"My poor boy does not know that it needs lakhs to do the transplant. He does not understand why the transplant is delayed. He thinks I'm scared to donate my liver to him. Injections and medicines are making him more irritable, he shouts at me, sometimes he cries. He thinks no one is willing to help him and not even me. How can I tell him that I don't have the money for the transplant? " - Shanthi.

Shanthi used to work as a tailor but after the fire incident, she is hardly able to do any work. Shanthi's father, a poor auto driver took care of her and two little children Arul (10) and Edwin (9). With his meager income, he managed to feed them and take care of their basic needs. But they cannot afford the transplant that costs Rs 18 lakh. In the past four months, Shanthi has been to several hospitals and now she is running to everyone she knows for help. Every passing day is a risk on Arul's life but poor Shanthi has no means to save her son from this dreadful disease.


"I'm literally begging to everyone. My heart broke into pieces when my a passer-by gave a hundred rupee note to him. I could see that the disease is slowly killing him. All I have in life is my children and I can't bear to lose him. I have forgotten to even smile, let alone being happy. We are crying day and night with no one to help us. Crowdfunding is my last hope to save my son." - Shanthi.

10-year-old Arul is battling a deadly liver disease. His liver has completely failed and needs an urgent transplant to survive. His mother who's had to overcome several hurdles in her life is struggling to save her son. She has nothing left with her and is desperately waiting for a help. The little boy lives in constant fear of death, with your support he can fight this cruel disease and live a normal life. 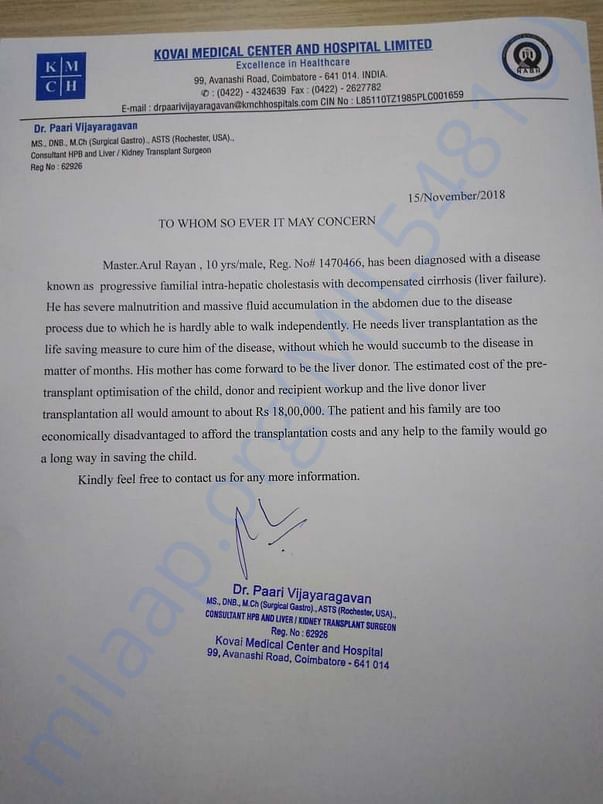 Master Arul is no more with us. Master Arul was undergoing his treatment but his health deteriorated and he couldn't make it.

Master Arul is doing well. Currently he is stable and recovering. He was undergoing a treatment for his  infection and now is doing ok. Doctors are planning to schedule his transplant soon.

Here is an update about Arul's health.

I have been identified as the donor and he will be undergoing the transplant this month. He is unable to walk properly and is being treated for the same. He is in the hospital as of now.

This campaign has stopped and can no longer accept donations.
$150 Million +
Raised on Milaap
Are you in need of financial support for medical or personal emergencies, or a social cause?
Start a fundraiser
Or
Know someone in need of funds for a medical emergency? Refer to us
Campaign organizer contact_mail
Tv
Tharun vel
Beneficiary: Master Arul Rayan info_outline
Report fundraiser

Tv
You are sending a message to
Tharun vel
Go back 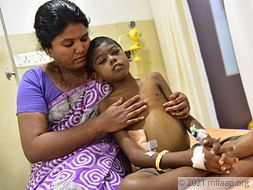