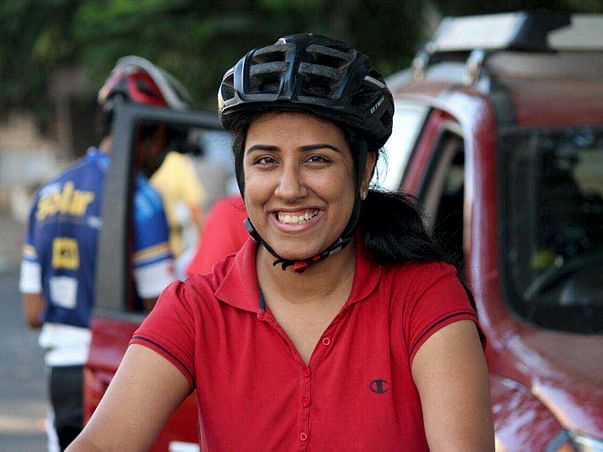 I am an Instrumentation Engineer by profession (NIT Surat) and cycling advocate by passion and practise. I have been appointed as the first Indian Bicycle Mayor of Baroda as a part of Global Bicycle Mayor Network by CycleSpace.
You try some solutions and then stick to one solution which may not be widely acceptable.
3 years back, when a flyover started building on the route to my office, it almost doubled my commute time for mere distance of 4 kms. I was mostly stuck in traffic when I was on scooty, auto-rickshaw or car. I then decided to try cycling to work. I was able to sneak past traffic easily; I was not guilty of less physical activity in the sedentary job life; I was eating all I liked without resisting myself and most importantly I was enjoying my commute as the pace was all in my control now.
The construction of the flyover got over in 2 years, but so much has changed in my life because of taking that one step of choosing healthy and smart commute mode. Read my interesting journey till now.
This is the story from Baroda, which is a tier-2 city and the traffic congestion has not gone that bad as compared to metro cities like Delhi, Mumbai, Bangalore, where such situation is very prominent, not because of any flyover in making but because they have turned into car-centric cities when they should be human-centric.
As the first Bicycle Mayor for an Indian city, I have been invited for the Bicycle Mayor Summit happening this June in Amsterdam followed by biggest cycling conference, called https://www.treep.bike/.
It is an exciting opportunity to share my work in the field of promoting cycling in Indian cities with the cycling advocates from different cities of the world and learn from their experiences.

The total cost for the visit is close to 3000 euros. CycleSpace has managed to provide me a ticket to Velo-City, where I will have the opportunity to gather new skills, learn more about cycling infrastructure in Europe and share my experiences from India. Unfortunately, they don’t have the funds to provide me with an airline ticket to The Netherlands, accommodation, traveling inside and other expenses during the conference. As it will be difficult to make this happen with personal savings alone, I still need to raise around 2000 euros (including the fundraising platform charges), for which I'm asking support.
What is the Bicycle Mayor Network?
A Dutch organisation CycleSpace with the goal of promoting cycling and sustainable mobility by developing innovative ideas, using the Dutch expertise in this field has launched a project, the Bicycle Mayor Network where they are building a network of cycling representatives worldwide called Bicycle Mayors for 2 years, here is an introduction video. Amsterdam elected the first Bicycle Mayor in June last year and Sydney, Rio de Janeiro, Sao Paulo and Mexico-City followed.
In Vadodara (Baroda) they have already found a Bicycle Mayor. Ms. Nikita Lalwani has been promoting cycling in a positive way through various initiatives and  partnering with local organizations. She also got endorsed  by the mayor of Baroda, Mr. Bharat Dangar and many local cycling and mobility experts.

Why Bicycle Mayor Summit ?
On June 10th and 11th 2017 the very first Bicycle Mayor Summit will take place in Amsterdam organised by CycleSpace. During this event all Bicycle Mayors will meet, share experiences and attend workshops and trainings. The event is planned in the weekend before the biggest cycling conference, Velo-City, which will take place in Arnhem & Nijmegen.  It brings together specialists involved in policy, promotion and provision of bicycle facilities and programmes.
Since Nikita is the first Indian Bicycle Mayor and therefore an example for the entire country, her attendance will be indispensable during the Summit. Nikita’s attendance will also contribute to strengthen the relationship between the Netherlands and India.

Why support Nikita ?
Her vision started with making cycles more acceptable in the society and on the roads, not just for leisure and exercise but also for the short distances commutes. She is the founder of Cycling Cities, a unique online and offline cycling ecosystem which has the vision to make cities in India cycling-friendly with at least 1/3 of the population preferring cycling as a commute option and also as a part of lifestyle. She herself is an avid cyclist and cycling to work champion. She started cycle for the commute in the year 2014 and that inspired many of her colleagues to opt for cycling. She is widely covered in leading media outlets which include Times of India,  The Better India, Divya Bhaskar, DNA newspapers, World Resource Institute (WRI) for various initiatives in Baroda city.

Cycling Cities is reintroducing cycling for fun, adventure and ultimately as a sustainable commute choice for shorter trips by organizing regular cycling events around health, heritage and fun in Vadodara City. Committed and dedicated to bringing cycling culture in the cities in India, the upcoming online platform will address the needs of cyclists from across the country.

She believes that in making city safer for cyclists, it is very important to put effort in building the critical mass for transforming the transport choices. A public supported and driven initiative will make it more sustainable and appealing to make the cities smart, livable and cycle-friendly as well.

How can you support her?
You can simply contribute by clicking the Donate now button on the top of this page. You can also share your suggestions for representing the Indian cities in the summit.

How can you help if you can't contribute?
You can help Nikita by sharing this link in whatever social site you use. It may be Facebook, whatsapp, LinkedIn, Twitter, or helping people, etc.
The break-up of expenses :
International Travel (Airfare & Insurance) : €950
Visa Fees - €105
Velo-City Ticket - €550
Internal Travel  - €350
Accommodation & Daily Expenses (9 days) - €675
Emergency Fund - €300 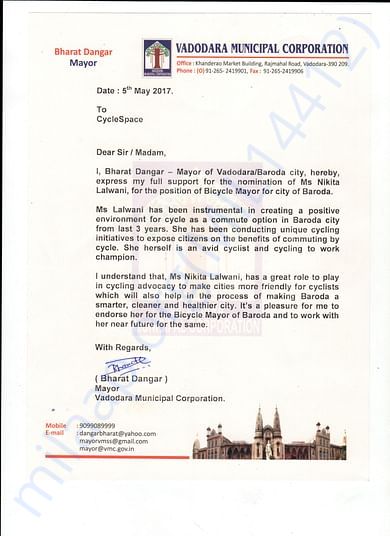 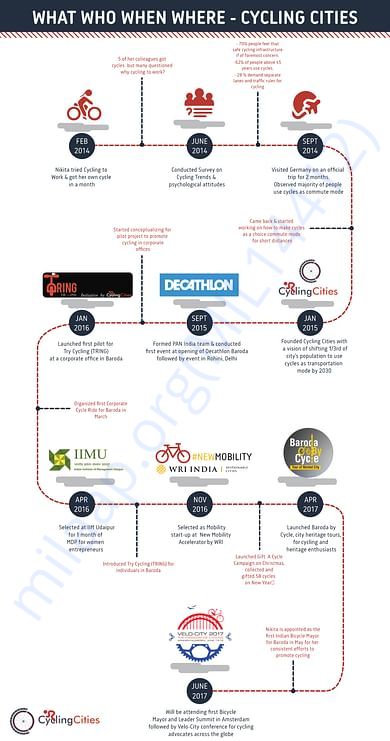 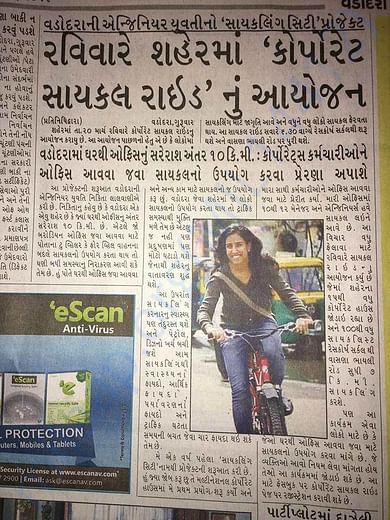 Launched Bicycle Mayor Movie during National Bike sharing expo by Bhopal Smart City and WRI on this World Car free Day :
Thank you for all the support.
I know, I know!! Many of you still have this question going on in your mind that what am I going to do with this Bicycle Mayor position, which is not a political role and not even a job but a voluntary position.
Here it is, all the planning, some detailing and so much energy to do it. What I will be doing and what it can lead it. Suggestions and involvement are welcome for the change which we wish to see :-)
https://bicyclemayorofbaroda.wordpress.com/2017/07/23/so-how-actually-a-bicycle-mayor-can-change-a-city/
#BicycleMayor
Dear Supporters,
Here is the first part of my experience during my recent visit to The Netherlands. Please consider this as a heartfelt gratitude towards your constant support and contribution in my journey. Do go through it as I have made sure that it is detailed yet crisp to not bore you enough!
https://bicyclemayorofbaroda.wordpress.com/2017/07/05/the-bicycle-mayor-of-baroda-attends-the-leader-summit-in-amsterdam/
As the journey continues with my Bicycle Mayor of Baroda role, I have structured the focus areas on which I will be working in the coming 2 years and I will soon be sharing them  to get public response and involvement.
Load more
Donate
Report fundraiser
See how thousands are crowdfunding for their causes on Milaap
Content Disclaimer: The information and opinions, expressed in this fundraiser page are those of the campaign organiser or users, and not Milaap.
If such claims are found to be not true, Milaap, in its sole discretion, has the right to stop the fundraiser, and refund donations to respective donors.

Donated to this campaign via Paytm? Click here if you can’t find your donation listed below.
A
Anonymous donated Rs.50
SC
Shruti donated Rs.1,000

Donated to this campaign via Paytm? Click here if you can’t find your donation listed below.
A
Anonymous donated Rs.50
SC
Shruti donated Rs.1,000

You are sending a message to
Nikita Lalwani
Go back 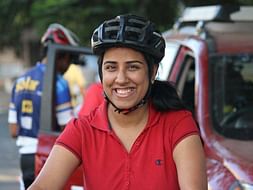