This Farmer Has Only 24 Hours To Save His Baby From Deadly Disease | Milaap
This is a supporting campaign. Contributions made to this campaign will go towards the main campaign.
This campaign has stopped and can no longer accept donations.
Milaap will not charge any fee on your donation to this campaign. 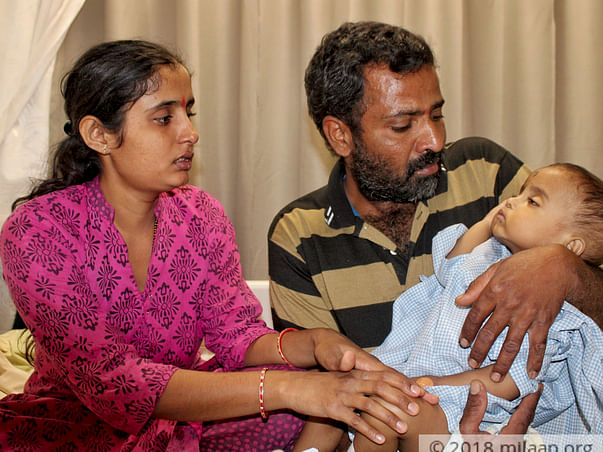 When Manjunath carries his 11-month-old baby, his tiny fingers tightly hold on to his shirt as he cries in pain. Every time he sees a doctor or a nurse, he’s terrified. Their baby boy has spent the last one-month suffering and in misery. If Manjunath, a farmer, is not able to arrange for a transplant in the next 24 hours, this baby boy will lose his life.


Manjunath and Asha’s small home in their village near Mandya, Karnataka, was a happy one. Their days were filled with their baby boy’s giggles and the little cooing noises he would make. Manjunath would make sure to spend time with the baby before setting off for a long day’s work on the farm. Even when he had the most tiring day, holding his baby in his arm and watching him smile would make everything better. Little did Manjunath and Asha think that in the months to come, their baby’s life would be in grave danger.

Recurrent fevers had left their baby weak and frail, but a deadlier disease is threatening his life

Manjunath and Asha’s baby boy is only 11-months-old but has already suffered a world of pain. After a month of relentless high fever and shuttling between hospitals, he was finally diagnosed with Severe Combined immunodeficiency, a life-threatening syndrome of recurrent infections, diarrhoea and failure to thrive. Without intervention, the disease usually results in severe infection and death in children in the first year of their life. The only chance that their baby boy now has is a bone marrow transplant which he needs in one day. Their baby can’t fight even the smallest of infections and living in a normal environment can be fatal. He’s running out of time, but his helpless parents have no one to lend them a helping hand.


“He said his first word ‘amma’ in the hospital ward, crying out in pain and fear. Until one month ago, he was such a happy baby and it felt like everything was going right for us. Our baby had started crawling and trying to stand up. I Now, it all seems like a distant dream. His smile has been stolen by this deadly disease and he’s been in and out of the ICU so many times. But now, he’s more critical than ever. I have just one day to save him and no one to turn to.” – Manjunath, father

With no income and no savings left, this farmer now has nothing to afford his son’s life-saving transplant

With the minimal income of Rs. 300 that Manjunath makes as a daily wager working on others' farms, he has to take care of his aged parents, his wife and two children. Manjunath works extremely hard to try and support his family, but ever since his baby fell terribly ill, he hasn’t been able to go for work. For one month now, he’s spent day and night in the hospital, sometimes sleeping on the floor or on the chair, and sometimes going the entire day without having a meal – all to save money to afford the bone marrow transplant.


“I've taken a loan of 4 lakhs already for his treatment so far, but I need 14 lakhs to save him. I barely have a few hundreds left. He needs the surgery tomorrow, but I’m nowhere close to being able to afford it. My relatives are all very poor and often come to me for help, they have nothing to give me. I have no way left to save my son.”

Manjunath has 24 hours to save his baby’s life and he’s running out of time. Their baby boy needs a bone marrow transplant by tomorrow, else, they risk losing him forever. This is the only chance that the 11-month-old has of a healthy future. Without this, he might not make it out of the hospital. Manjunath and Asha long for their child to be happy and healthy again. You can help save their little one from this pain and trauma. 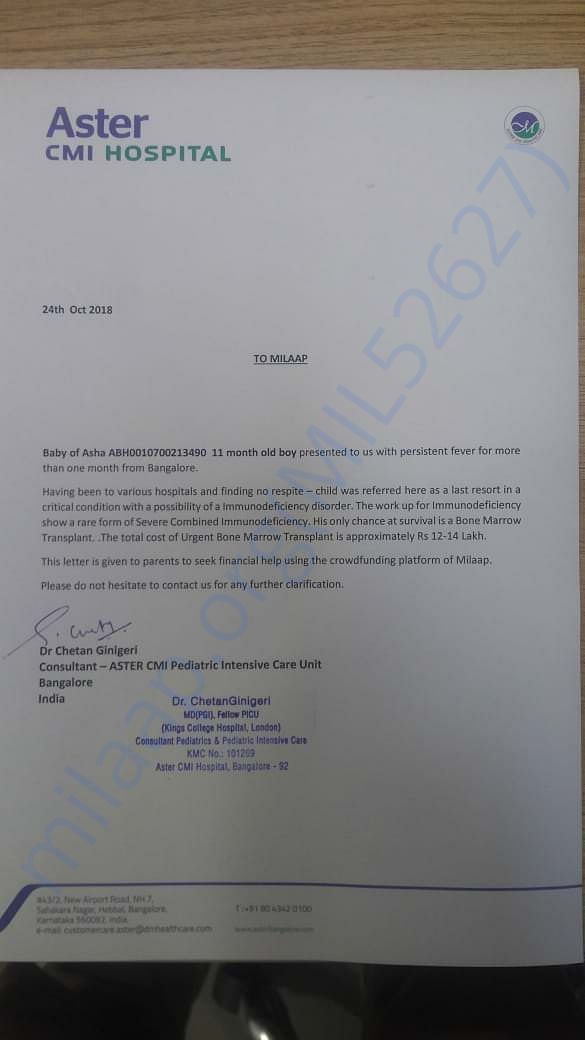 Baby of Asha has been discharged. Baby is currently at home and is doing well. Baby will be taking baby to the hospital for regular check ups. We shall keep you posted.

We are grateful for all the support shown towards our baby!

He has been moved to the BMT ward. His WBC (White blood cells) count has dropped to a critical level. He was given a WBC (White blood cells) transfusion from his mother. He is unable to eat or drink anything and doctors have informed us that his blood counts would drop further before they increase to normalcy. This is going to be a very crucial week for him.

Please keep him in your daily prayers and help him get through this!

We are delighted by the support shown towards our baby.

He is in the ICU and his WBC (white blood cells) count has dropped very low. We are awaiting his blood reports which are due in the next couple of days to schedule the surgery if the count has improved. He is vomiting after he eats and has a cough and fever.

Please keep our baby in your prayers for a speedy recovery!

My prayers are with you! The baby will be fine soon!

wishes and prayers for the baby's speedy recovery

My prayers are with you! The baby will be fine soon!

wishes and prayers for the baby's speedy recovery 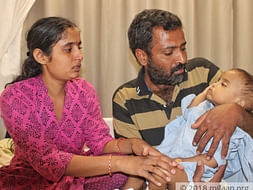