With one kidney and a strong heart, her faith remains unshaken | Milaap

With one kidney and a strong heart, her faith remains unshaken

It was Wednesday afternoon. The sky was covered with dark clouds. Bebiben had a pale look on her face. She had arrived some time back from the hospital after donating her kidney to her husband. Her pallid face showed some signs of interest when the conversation came to the point about when and how she had grown her business. Bebiben is a resident of Chandkheda, a neighborhood of the metropolitan city of Ahmedabad, which lies west of the Sabarmati river in Gujarat.

She is one of the members of the group Ravi Mahila Mandal. As the group leader Kokilaben was too occupied with work that day, I met Bebiben instead in order to check on the progress after the group had borrowed a loan for enterprise development.

Bebiben is the proud and confident owner of a provisional store, one that she has been running since almost six months. Her husband used to be a vegetable vendor. But after his health started deteriorating he got confined to bed. Two of her sons took the responsibility upon themselves and continued their father’s business of selling vegetables. The family stood united in desperate times and helped each other in coping with the difficulties.

With the loan from Milaap two months back, she was able to restock her store and add more varieties of goods to it. Her business helps her in successfully meeting all the household as well as the medical expenses. Besides this, she is also able to fund his third son’s education, who is currently in 9th class. Her business provides her with an average income of Rs. 10,000 every month.  Despite her aging and increasing health issues, Bebiben is being strong for her family. Her strength and unwavering faith is highly admirable. 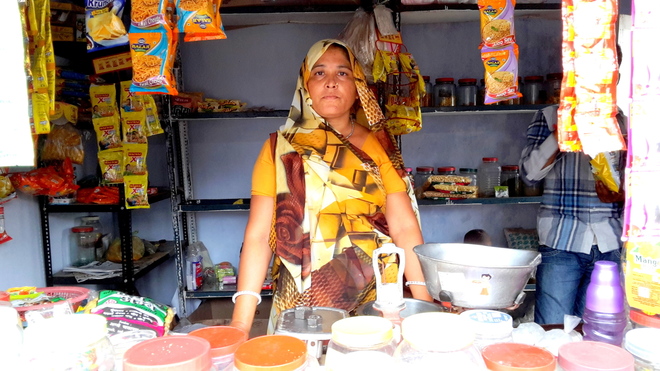 Bebiben at her provisional store

From personal to social causes, to raise money online Milaap takes up every crowdfunding project and makes sure that it reaches out to the world. We work for the rural sector too and carefully monitor the progress of every campaign.