What happens when a loving and supportive husband encourages his wife

Shares
Shares
Share on whatsapp
Unfortunately, I was not able to meet the group leader Meeraben of the Mira Mahila Mandal, but I was able to meet Champaben Rameshbhai who is a member of the same group. Champaben runs a cutlery business. Cutlery is not spoons and forks as I assumed before visiting her; over here, cutlery business means a variety of items like hair-bands, make-up products, bangles, earrings, powder etc.
While asking Champaben a bunch of questions, her husband kept chipping in and adding tidbits about Champaben. He told me that she had been at this business even before marriage. He explained how she was illiterate but excellent at her business. He also told me that he had studied till the 9th grade and how it is customary that the man could be educated and the wife generally was not. But he said no matter how educated she had been or not, she is perfect and they work well together. They have two sons and two daughters; their oldest is 10 years old. They both run the business and their products are found at festivals and neighboring villages too.
They had plans of rebuilding their house, but unfortunately could not do it because money was spent towards Champaben's father-in-law's illness. But they hope to get to it as soon as they save enough money. 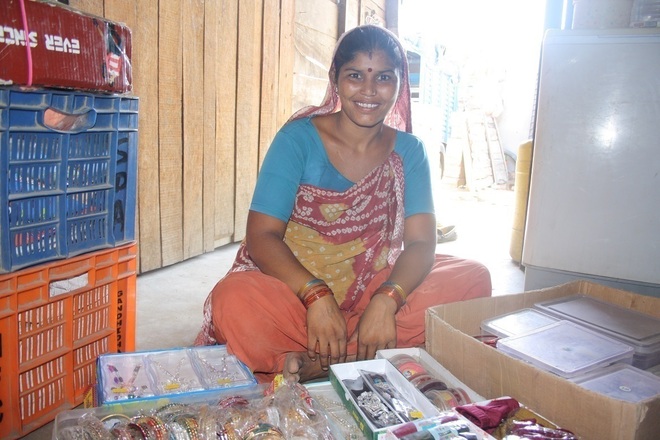