This 23-year-old Young Mother Was Abandoned By Her Husband After She Was Paralyzed | Milaap
loans added to your basket
Total : 0
Pay Now

vm
You are sending a message to
vigneshwari m
Go back

Shares
Shares
Share on whatsapp
23-year-old Vigneshwari gave birth to a child just a month ago. She should have been feeding and lavished love on her baby instead, she is fighting for her life due to a tumour in her brain. To make things worse she is paralyzed on the left side of her body and her husband left her as soon as he found out. She needs intensive treatment to survive.

Within a month after her delivery, she is diagnosed with a tumour in her brain

Vigneshwari has always been very a cheerful and innocent woman. She fell in love with Sathya Narayanan and married him a year ago. Her parents Murali and Sumathi accepted their marriage and everything went well. Her parents were thrilled when she got pregnant and they were cloud nine when the baby was born.

Little did they know that their life would turn upside down in few days. Vigneshwari was vomiting frequently and she had a terrible headache. She had this pain for a long but they mistook it for common pregnancy problems. When she vomited even after giving birth to the child they took her to hospital.

Murali was devastated when the scan reports confirmed that she has an Oreo-sized tumour in her brain. Within a blink of the eye, her condition became worse.  Her left side of the body became paralyzed. Three major surgeries were done to remove the tumour in her head. Tracheostomy is also done (an opening in the neck to bypass an obstructed airway to more easily deliver oxygen to the lungs).

Vigneshwari is fed via tubes. Now she is able to take liquid foods orally. She cannot talk because of the tube in her throat. One can imagine the thoughts rushing through her mind, tears run down her eyes like a stream every time. She has not seen her baby all these days. She could only see her mother and father next to her.

Vigneshwari's husband has left her after knowing that she is paralyzed

Vigneshwari's husband and his family have not turned up after knowing that she is paralyzed. Their baby is with her husband. Her husband lost his job in a company because of frequent seizures. He has other medical conditions which were concealed before marriage. Vigneshwari had never shared her problems with the parents knowing that they cant bear her suffering but now everything is beyond her control and she is absolutely helpless.

"No father should experience such a pain. How will I tell her that husband has left her and her baby is with him?  I don't know how we are going to manage. Despite my age, I begged her husband to come to the hospital but he did not bother. They are scared that we might ask them to pay the bills. I don't regret spending money for my daughter but I can't bear to see her life and future at risk." - Murali.

Murali works as an auto driver and earns a meagre amount

Murali is an auto driver, working day and night to make the ends meet. He has a son who is studying via distance education. He is now doing a part-time job to support his family. Murali is devastated beyond words, physically and emotionally exhausted. He was saving every penny for his son's education and was living a very modest life. Now, he has no money even for the next meal. He has spent all that he had and borrowed money for Vigneshwari's treatment.

Vigneshwari's treatment is a long process. She needs physiotherapy and medications to help her recover from the paralysis. She has become too weak and it is still uncertain if she can talk at ease after all the surgeries and tracheostomy. Most importantly, her mental health has taken a toll and she needs high medical attention to cope up this tragedy.


Vigneshwari in a function with her relative's kid

"I earn maximum Rs 500 per day out of which I have to pay 250 for the auto rent. I have borrowed money for heavy interest which will  take my lifetime to pay back. After all, she is my daughter, I can't let her down. I will help her to live in all the possible ways I could do. " - Murali.

Murali and Sumathi are looking after their daughter day and night. They have hardly slept or eaten these days. They cannot think of anything but to save their daughter's life. What has happened to Vigneshwari is too much bear for any parents. They have gathered all their strength to support their daughter.


Parents have exhausted all the savings

Murali is the sole breadwinner of his family. He is struggling to save his daughter's life. Vigneshwari needs to be in the hospital until she can be fed orally without tubes. She needs intensive treatment and medications to recover from the paralysis. She requires Rs 6 lakhs to continue treatment.

Your contribution can give Vigneshwari a second chance to live! 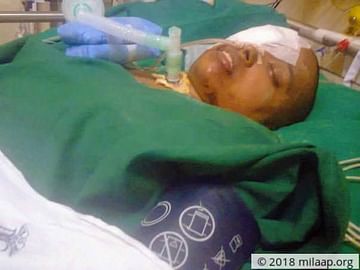 Help Vigneshwari to Recover From Brain Tumor and Paralysis

She needs to continue the treatment but her parents cannot afford it.