Venkata Laxmi’s Children Will Become Orphans If She Dies, Help Her Get A Second Chance At Life | Milaap
loans added to your basket
Total : 0
Pay Now

Venkata Laxmi’s Children Will Become Orphans If She Dies, Help Her Get A Second Chance At Life

“Without her, her children will become orphans and will not have anyone to look after them. Even now, they cry and ask us where their mother is.”

Life hasn’t been generous to Venkata Laxmi, a 40-year-old woman who’s suffering from a severe liver disease since the past two years. What makes her exceptionally unfortunate is that her husband passed away last year from a sudden heart attack. That left an ailing Venkata Laxmi as the sole parent of their two children, who have brain deformities and developmental disorders.


Laxmi with her brother at the hospital

Two years ago, Laxmi started getting bouts of dizziness and her legs would swell up. When she complained of this to her husband, he took her to the government hospital nearby. They didn’t make much progress with the medicines prescribed there. When her symptoms started flaring up again, she went to Apollo, where she was diagnosed with Cirrhosis - a fatal liver disease in which the liver starts malfunctioning. If left untreated, cirrhosis can lead to death and a liver transplant is the only way to go.

Laxmi's life has been a string of unfortunate events put together

In May last year, her husband died and the responsibility of taking care of the special children fell onto Laxmi’s shoulders, who is battling a severe liver disease herself. Being a single mother of two children with special needs is no mean feat, and Laxmi has been doing this despite being extremely sick. Her children are all she wants to live for.


Laxmi, with her brother in the hospital

Her 17-year-old son Teja’s disability doesn’t let him attend the school like the other kids. Her 13-year-old daughter though, goes to school, since her condition is a little better than that of her brother.

“It breaks her heart to think what will happen to her children if she’s gone. To her, that is more painful than the hell she is going through,” - says Venkateswar, her brother.

Since the diagnosis was made, her brother Venkateswar Rao and her husband’s friends have him helping her fund her treatment by contributing whatever meager sum they can. They have been her pillars of support so far, taking turns to look after her at the hospital. Her parents are taking care of her children while she’s in the ICU.

Her brother, being the only other working member of the family tries and juggles between taking care of Laxmi and his aging parents and Laxmi’s children.

“They don’t have the mental capacity to understand what’s going on and keep crying for her. They miss her terribly. We can’t afford to lose her, at least for the sake of her children,”  Venkateswar says, almost breaking down at the thought of losing his sister.

Laxmi’s family hails from Peddapuram, Andhra Pradesh. Both her parents and her husband's family make their living working as farm help. This work gets them a minimal pay of Rs 3,000 a month. Since the diagnosis, Venkateswar hasn’t been able to go back to work and now his income is nil.

For the treatment so far, they have borrowed money from friends and relatives. Her brother has also sold off his land to fund her treatment. Laxmi sold off all her cattle in order to pool some money. But the treatment is still far more expensive than they can bear.

So far, everyone has been very supportive in order to get Laxmi the treatment she needs. But poverty is very prevalent in all Laxmi's famliy and there's only so much they can do. If she doesn't get the funds soon, all their worst fears may come true.

Let poverty not claim another valuable life. Please contribute to saving her life. 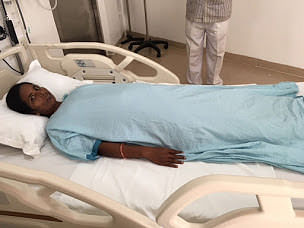 Laxmi's health is worsening because of a severe liver disease and she needs an urgent transplant.