Help This Disabled Father Save His 3-Year-Old Daughter | Milaap

S
You are sending a message to
Somshekar
Go back

Help This Disabled Father Save His 3-Year-Old Daughter

Shares
Shares
Share on whatsapp
Somashekar, 40  walks through the hallways of HCG Hospital, Bangalore with his arm-crutches. His mother is carrying Varsha, Somashekar’s 3-year-old daughter, in her arms; waiting for him to come back with the room number for today's chemotherapy session. It is little Varsha's fifth chemotherapy session. She was diagnosed with Neuroblastoma (an aggressive type of cancer) three months ago. Since then, the family spends 15 nights of every month on hospital beds.

“We were suppose to enrol her for school this year July. Me and my wife have been saving for school fees, new uniform and books. But here we are, filling hospital forms and paying for tests and her treatment. It pains me to see my 3-year-old being plugged to needles and wires.”, Somashekar says, eyes welling up as he watches his daughter getting prepared for the scheduled chemotherapy session.

“It was the month of March. Varsha had a week-long fever and we thought it was the weather change. Like any other day, we had just finished lunch. The kids - Varsha and her brother, were being their usual selves, running around, playing ball. Suddenly, Varsha screamed. I can’t explain why I got a sinking feeling in my chest; ‘This isn’t normal,’ I told myself. I had never heard her scream like that before,” recalls Somashekar.
The ball had hit Varsha’s eye. They iced her eye immediately. But soon her eye was swollen. The following week, Varsha complained of severe back pain and refused to  walk. She had to be carried around. The local doctor referred them to HCG for more tests. “I knew Varsha needed a bigger hospital for the tests. But I had no idea HCG was a hospital for cancer. How can a ball injury cause so many problems?” said Somashekar thinking about that horrific week. Soon the tests revealed that Varsha had Neuroblastoma, an aggressive type of cancer.

Today, Varsha needs 8 cycles of chemotherapy, radiation treatment and a surgery in the near future all costing around Rs 22 lakhs. The family has medical insurance through the Employee’s State Insurance that will cover treatment worth Rs 10 lakhs only. Though this comes as a huge relief for the family, Somashekar has no idea how he will arrange for the remaining Rs 12 lakhs.
Somashekar lost his leg in an accident 10 years ago. A florist by profession then, he was delivering an early morning order which cost him his leg and has left him unemployed since. He has been doing odd jobs but none fetched him more than Rs 200 a day. His wife works in a garment factory in Peenya. Today the family of 6 survives on her monthly salary of Rs 7,000.
“Varsha needs her mother. But my wife needs to be in the factory by 8am. It is in Peenya. I see my wife struggle between work and home. I know things would have been different if I had a job too. But I try to do everything my wife would to comfort Varsha during the chemo sessions,” relates Somashekar.

Varsha is just 3 and has a whole life ahead of her. She has a good chance of a full recovery. If the treatment continues as scheduled, her doctors are sure she will make it. Her resilience through the painful blood transfusions and chemo sessions proove that she is a fighter.
Somashekar's wife earns 7,000 a month and it is the only source of income for the family of 6. There is no way they can arrange for 12 lakhs. It is not easy for a parent to see his child fight complications this grave. Your support will save his 3-year-old daughter. Please contribute now and help Somashekar. 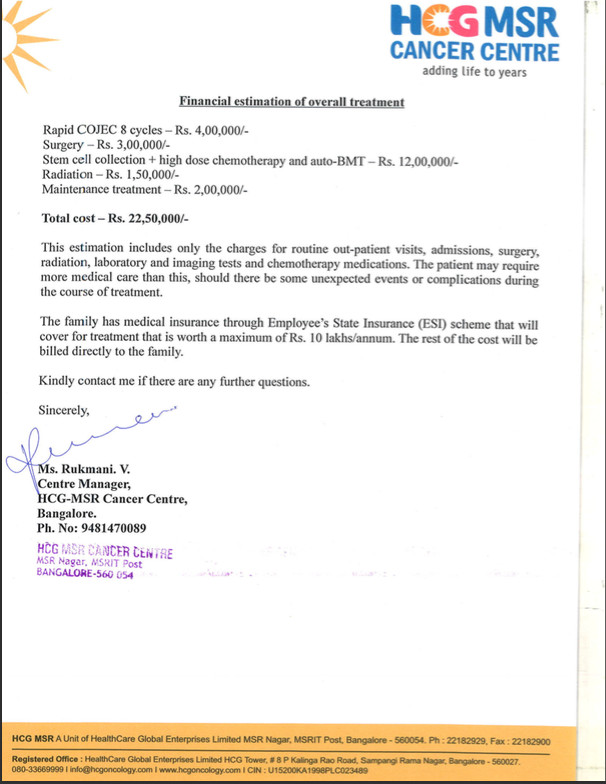