Once the Pride of Sarjapur, the Saul Kere Lake Is In Dire Need of Help Now | Milaap

Once the Pride of Sarjapur, the Saul Kere Lake Is In Dire Need of Help Now

Shares
Shares
Share on whatsapp
When one thinks of favorable climate, enticing greenery, and a plethora of lakes, the image of Bengaluru conjures up in one’s mind instantly.
However, looks like it’s about to change. And change for worse.
In 1937, Bengaluru had 937 lakes. At present, there are less than 80 lakes; out of which only 34 are live lakes. This does not end here. The surviving lakes are constantly under threat from encroachment, sewage pollution, amongst other problems.
“The condition of the majority of the lakes in Bengaluru is poor because of discharge of sewage and encroachment. If proper action is not taken in the next five years, a majority of the lakes will die,” says Ayi Vaman N Acharya, chairperson of the Karnataka State Pollution Control Board (KSPCB).

Saul Kere – One of the Lakes That Needs Immediate Attention

Situated behind RMZ Ecospace, near Sarjapura Road is Saul Kere – a lake witnessing a similar fate.
Aren’t we all too familiar with how rapid urbanization and unplanned development are responsible for the current scenario?
But, the question arises as to what can be done to fix this situation. Rejuvenating a lake might seem like the appropriate solution. But, not only does restoration of a lake take a lot of time, it won’t give the intended result unless people take responsibility for their own habitat.

This Lake Has Had a Tough Battle

Saul Kere along with the other lakes have played a huge role in building the rich history of the city. But, at present, they are fighting a tough battle.

Spread across 62 acres, Saul Kere is one of the largest lakes in the area. More than three acres of the lake were encroached upon by illegal occupants, with houses built on the lake bed. Despite issuing notices to vacate the land, the encroachers paid no heed. In 2013, they were cleared and restoration process of the lake was started.
At present, multiple civic projects are under progress on the Saul Kere Lake, which includes de-silting of the lake and clearing the inlets and outlets that connect the lake. About 1500-2000 saplings have been planted including local, herbal, and medicinal plants.
Other citizen initiatives include a monthly cleaning drive, plantation drive, creation of a lake lover’s club for children and conducting monthly health screening for senior citizens and children.
In order to bring activists, environmentalists, and citizens together and help restore lakes, United Way Bengaluru has partnered with Milaap to organize Nandi Hillathon with the aim of saving the city of Bengaluru. Although the event took place on 12th June and is already over but you can be a part of this constructive approach and play a prominent role in saving the city.
According to the United Way Bengaluru, “Bruhat Bengaluru Mahanagara Palike (BBMP) along with several lake association groups are conducting several activities to rejuvenate Saul Kere Lake. However, the citizens of Bengaluru need to actively participate in these events. They need to start acting as the guardians of the lake. Only then will we be able to protect Saul Kere for the next generation.”

We need to ask ourselves what do we want – Bengaluru as a city of pristine lakes or billows of froth?

We don’t want to see our city completely transforming into a parched wasteland. It’s high time that we act. Your contribution can help us continue working for this cause. It will, in fact, go a long way in reviving the dying lakes, thereby helping preserve the city. You can contribute to this campaign here. For more details on United Way Bengaluru, kindly visit www.uwbengaluru.org.
Donate 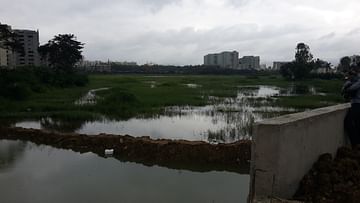 Help save the Saul Kere Lake