“Our lives were complete with each other. But everytime Tania played with a neighbour's or relative’s baby, she would spend days in silence. Sometimes going without food or sleep. I had nothing to console her. This was supposed to make her happy. But now with our babies so sick, even in her condition she is worried sick.” - Afzalur, Tania's husband.

Afzalur and Tania made a lot of sacrifices to ensure the safety of their newborn babies. Their prayers for a family was answered after 8 years, when Tania miraculously got pregnant with twins.

"The doctors warned us about premature delivery because of my age. I was not ready to abort my children. That would have been so cruel. As things got rocky, Afzalur was forced to quit his job to take care of me."

Tania was on complete bed rest. Although Afzalur did not have a fixed income selling seasonal goods like garments and accessories, he made enough for them to live comfortably. He could have never predicted having twins, nor could he have known that there was a great risk to this pregnancy.

"Everytime the babies would kick, I'd get scared. I'd pray they stay in just a few more months, until they are ready for the world. I think my fear and anxiety led to the inevitable. They came weeks before the due date."

Problems started two days after they were born

When their newborn babies were put on breathing support, they were not too worried. Most premature babies needed some breathing support. It was only two days later that they realised that something was wrong with their babies.

"I thought we could take them home soon. This is when we found out that our daughter had a hole in the wall of her intestines. All her poop was leaking into her abdomen causing infection and fatal complications."

She was operated immediately and is currently under intensive care. She needs to be monitored constantly to live. Even the slightest carelessness can kill the few-days-old baby. The baby boy isn’t healthy either and needs breathing support.

"With the twins so sick, and no current income, it looks impossible for me to save our babies. We have nobody to help, even to come stay by Tania's side when I'm at work. This is a lone fight."


“I am growing old already. Since Tania’s pregnancy, I have been thinking ways to secure my children’s future. I dreamt of them being successful in life. But right now I am having to think of saving their lives,” says Afzalur.

The couple had thought that two children were their reward for 8 years' of waiting. But even after having their own children, they can only look at them from a distance. It breaks their heart because they can't even hold their little babies.


Tania is in no condition to deal with the situation. The labor weakened her and the mental stress is causing her body to breakdown. Her small, helpless babies are struggling to live and even breathe. Her happiness at their birth seems to be slipping away. The couple is living a life of uncertainty and hoping for a miracle that will save them.

Afzalur has already spent Rs 5 lakh since Tania’s pregnancy. He has spent all his savings and is deep in debt. He has no relatives to turn to. It’s very difficult for any parent to face the prospect of losing their children. It is much worse when they are born after years of longing. The little babies haven’t even fully seen their parents’ faces. They need Rs 11 lakhs to get out of the incubator and see the world. Only your support can help them live. 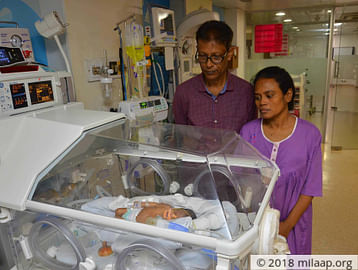 Help Tania and Afzalur save their premature twin babies

After years of waiting, Tania and Afzalur finally had twins. But they need your support saving them.