Through the markets of Guwahati during the Festival of Feasts | Milaap

Through the markets of Guwahati during the Festival of Feasts

By Rishi Ganguly
16 February, 2020
Shares
Share on Whatsapp
In the Assamese month of 'Maagha', which is parts of January and February, the people of Assam celebrate Magh Bihu. Magh Bihu, or also known as Bhogali Bihu from the Assamese word 'Bhog' which means enjoyment and feasting. The other parts of India celebrate Makara Sankranti, Pongal, Lohri, etc. together with Assam during this part of the year. 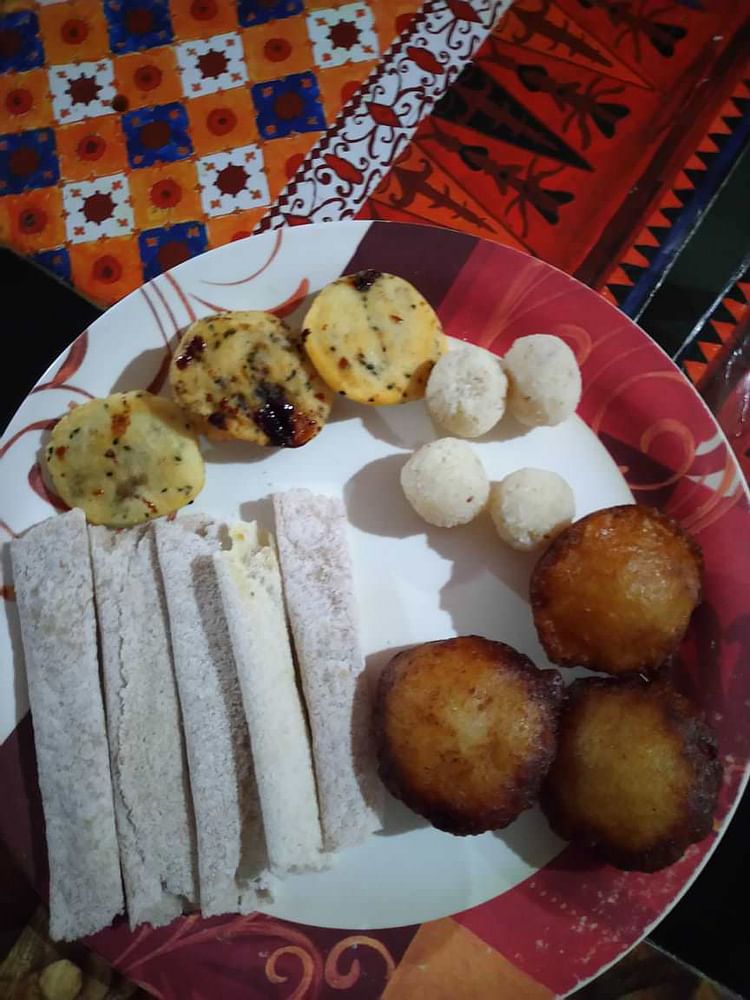 Magh Bihu is one of the three 'Bihus' or local festivals that are popular in Assam. The other two being 'Rongali Bihu' held in the month of April, which is the most important Bihu as it celebrates the Assamese New Year and the celebration of Spring. The last being 'Kati Bihu', which is celebrated in October or the month of 'Kartik' in Assamese, which is much less festive than the other two Bihus. It is a time for protecting the crops, worshipping the plants, and hoping for a rich harvest. 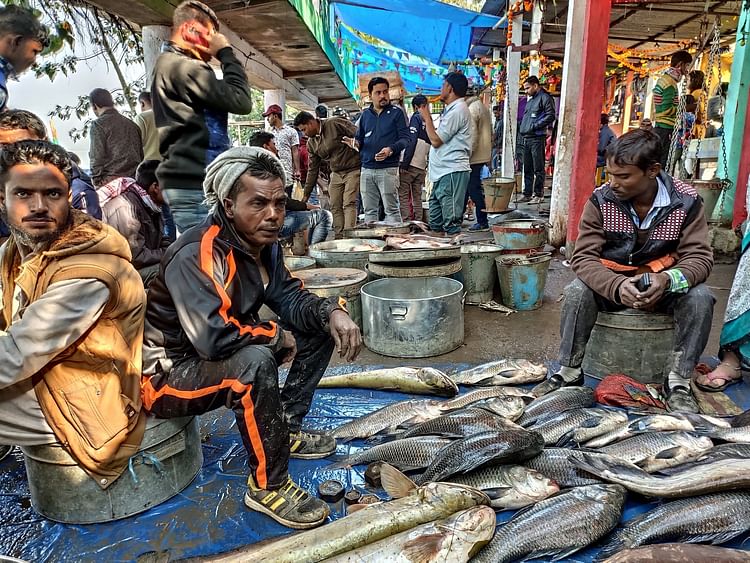 On the banks of Brahmaputra river, fishermen and fishmongers sell their prized catches of the day.All over the state, large markets were set up selling all kinds of goods. Fish, fruits, meat, vegetables, utensils, you name it. In Guwahati, the Ganeshguri bazaar is one of the largest markets in the city. It is a dense market with fruit and vegetable sellers on the entrance and the fish and market are deep within the bowels of the place. The city is blessed with the mighty river, the Brahmaputra, which is rich in a wide variety of freshwater river fish. 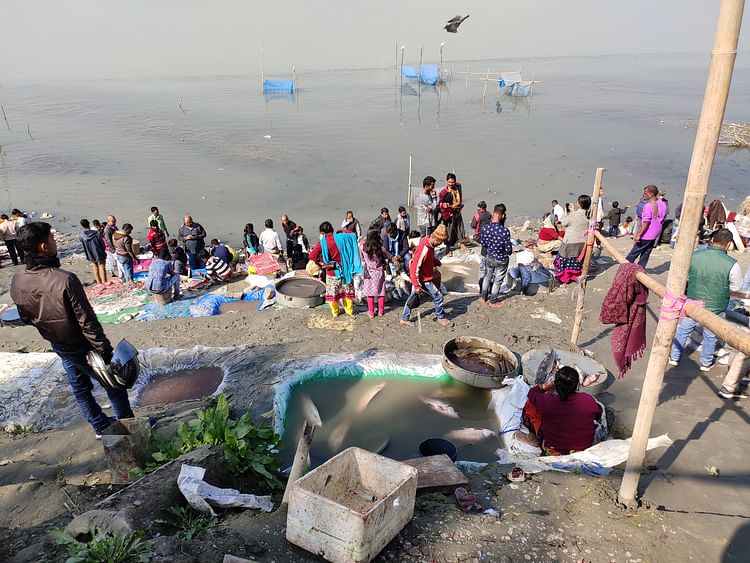 The fish market on the banks of the Brahmaputra. This is one of Guwahati's most famous markets - the Ganeshguri Bazaar. Apart from the freshest fruits, meat, and vegetables, the bazaar is filled with stores selling anything from clothes, shoes, utensils, etc. There are a number of ethnic and Bengali cuisine restaurants where one can satiate their voracious appetites after a busy day of shopping if they can escape the humongous crowds that flock here. 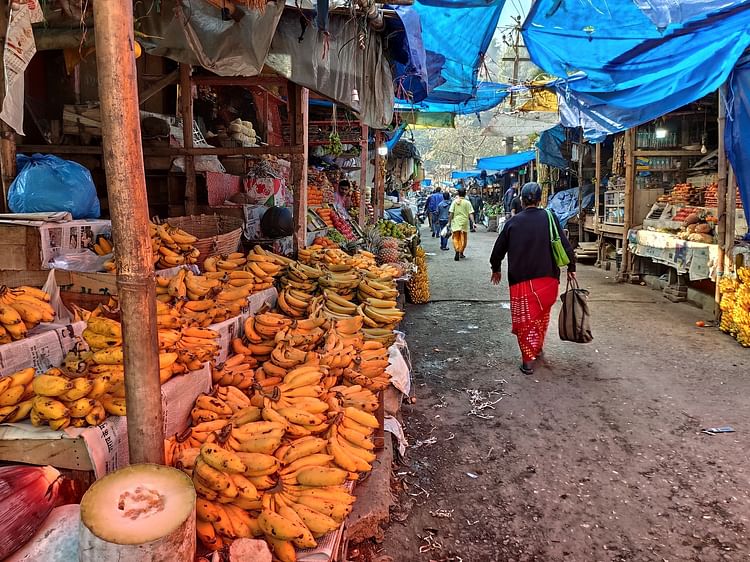 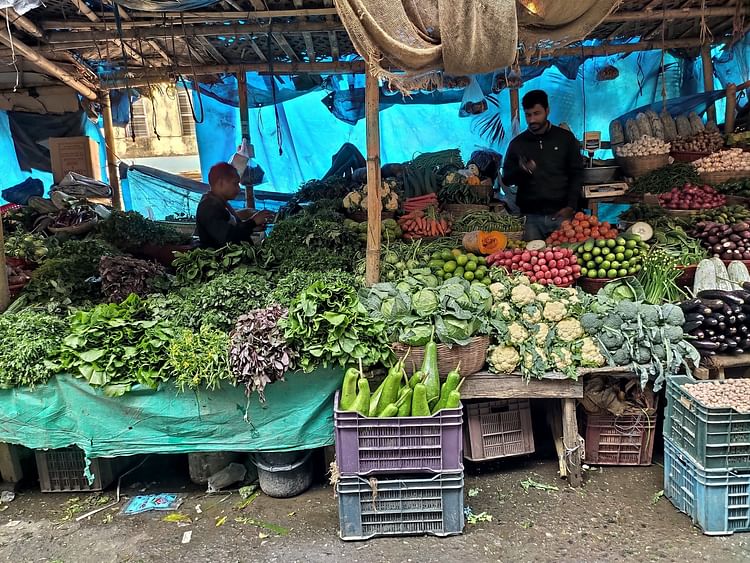 In Assamese households, it is a matter of pride to prepare the freshest and tastiest fish for their beloved family members and friends. No matter the household, fish dishes have a special place in their hearts. 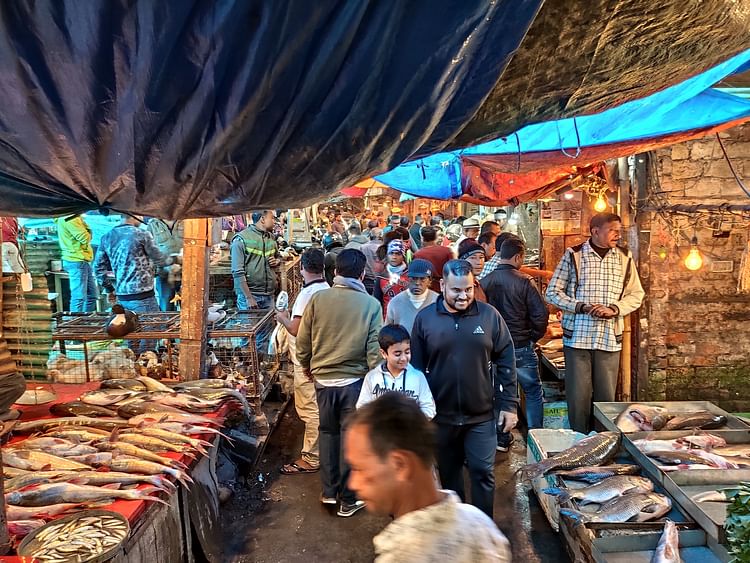 The entrance to the fish and meat section at Ganeshguri Bazaar.The famed Ganeshguri fish market. The stalls are run by keepers who have been in the business for over 20 years. They and my father know each other very well. It is always fun to get secret discounts just because you knew them for so long. 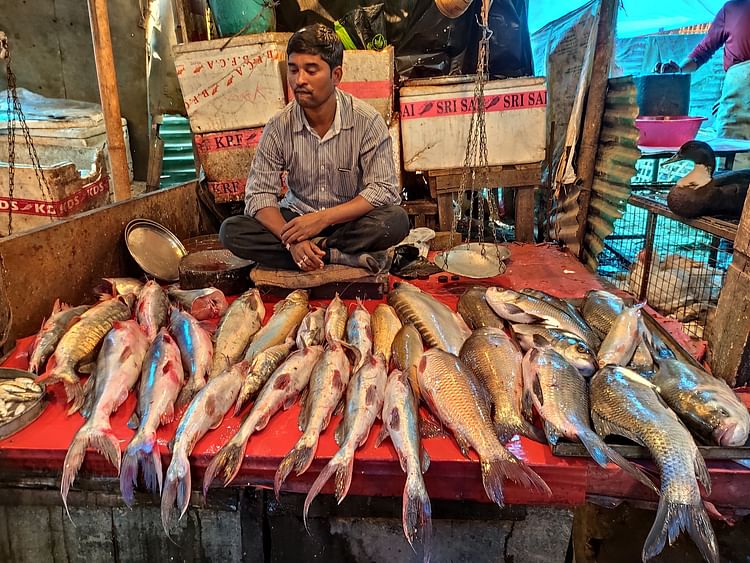 One of the fish sellers with his fresh fishes.There are over 50 different varieties of fish being sold here. For Magh Bihu, the prized breed of fish is the Chitala or the knife fish. The fish is notorious for its excessive spikes but the people love the flavor of it. 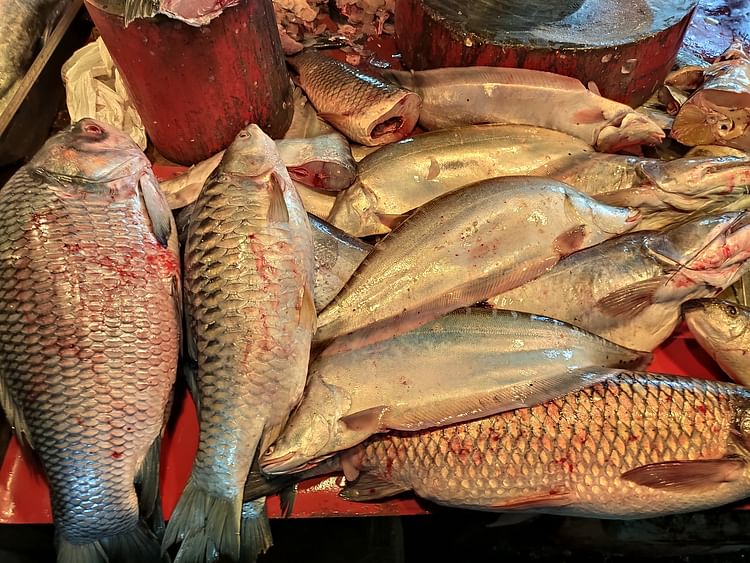 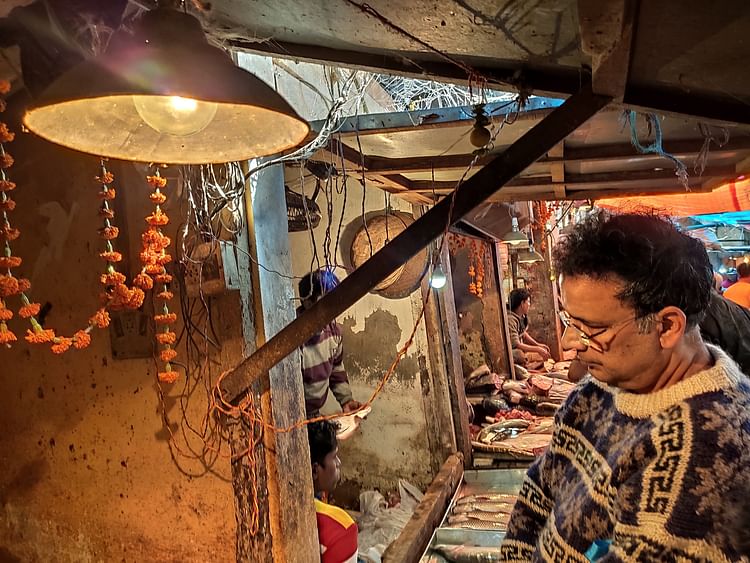 A customer carefully inspects the way his fresh fish is being handled by the fishmonger. A diligent customer carefully inspects his fish. He observes with great attention the way the fresh fish glistens in the sun, the blade of the expert fishmonger who had spent years in his trade. There is an intimate relationship between the seller and the buyer. Both share a trust in each other. A trust that both shall benefit from this trade. 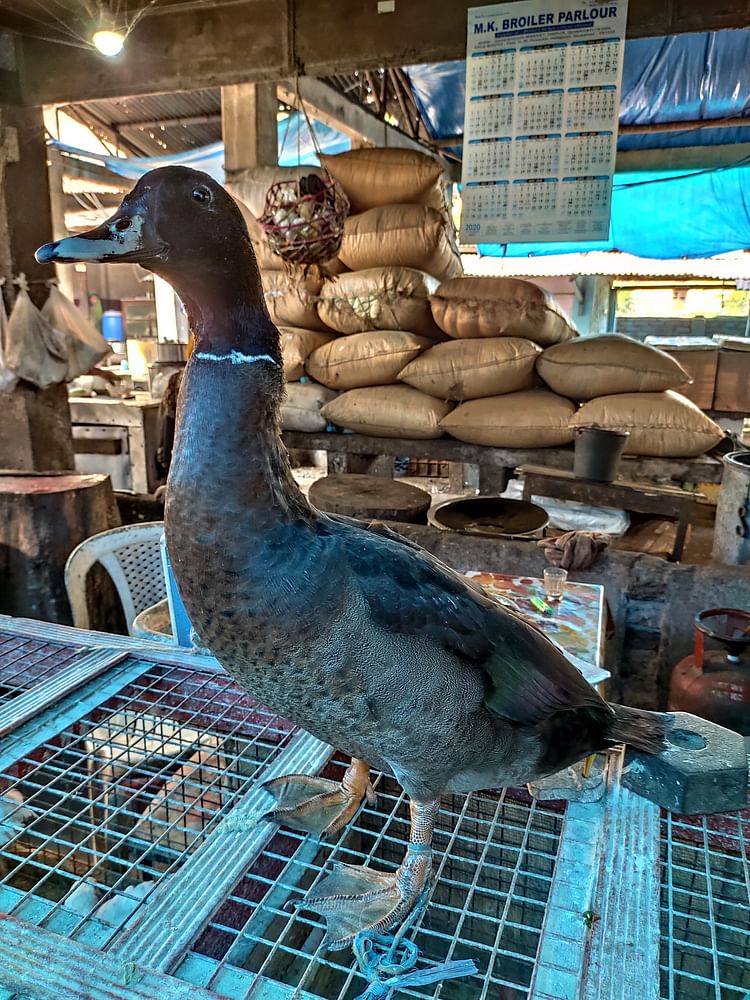 A duck tied to the top of a cage filled with other ducks. Apart from fish, there is a large variety of other meats that the people are crazy about. Some of the popular animals that are slaughtered are - chickens, ducks, goats, and pigs. The Ganeshguri Bazaar does have a large chicken and mutton section where hundreds of animals are slaughtered daily to satiate the hunger of the people. According to a generic local, "How can it be a feast without meat? It's unthinkable!" 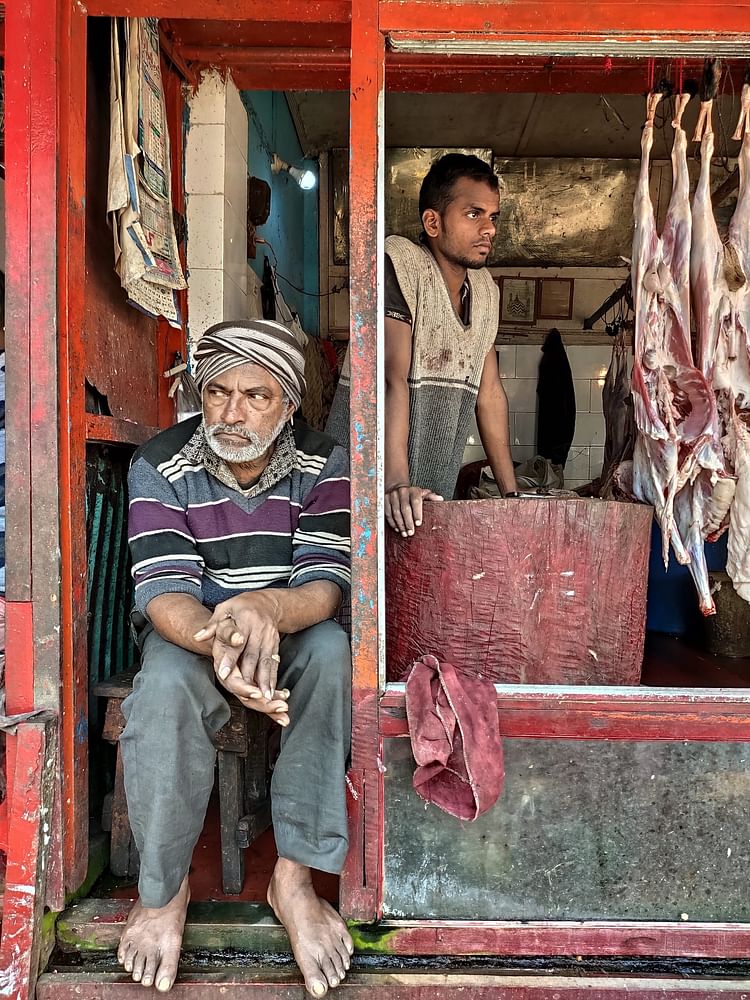 A mutton butcher who ran his stall for over 25 years. There are many downsides to a massive feast. The number of animals, birds, and fishes being slaughtered daily, and the numbers shoot up to sky-high levels during the eve of feasting. While the markets may not be nearly as cruel as to the mass production meat-industry, there needs to be a conscious discussion on whether we as a society need such a large amount of meat.

The younger ones, including myself on many occasions are addicted to consuming meat and the elders brush off any opposing opinion with defensive remarks such as "This is only for a day, why are you so bothered? Then don't eat! Simple!" It feels like it would be much more inclusive if vegetarian and vegan alternatives were introduced in households for those who choose to forego meat and animal products for their own convictions. 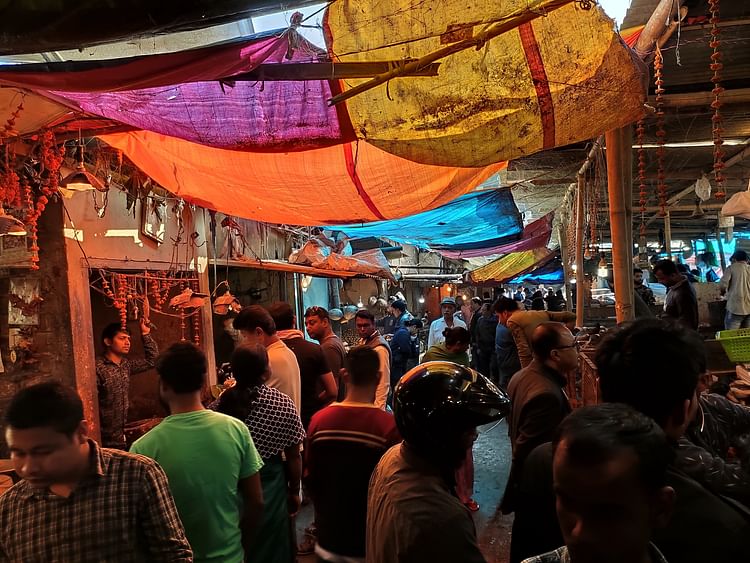 A shot in the heart of the Ganeshguri Bazaar.Finally, the Uruka eve, when people huddle close over the warm burning logs of wood, roast potatoes, meat, vegetables, and share a drink or two with all of their loved ones. Large towers of hay from the harvest and sticks are constructed which are called 'Mezi'. In the cities, people sing songs with guitars and drums or speaker systems but in rural settings, it is common to hear the 'dhol' being played expertly throughout the night.

The following dawn sees the 'Mezi' or 'Meji' being set on fire. This symbolizes the heat of the burning Meji will burn away the winter season and slowly move onto Spring. 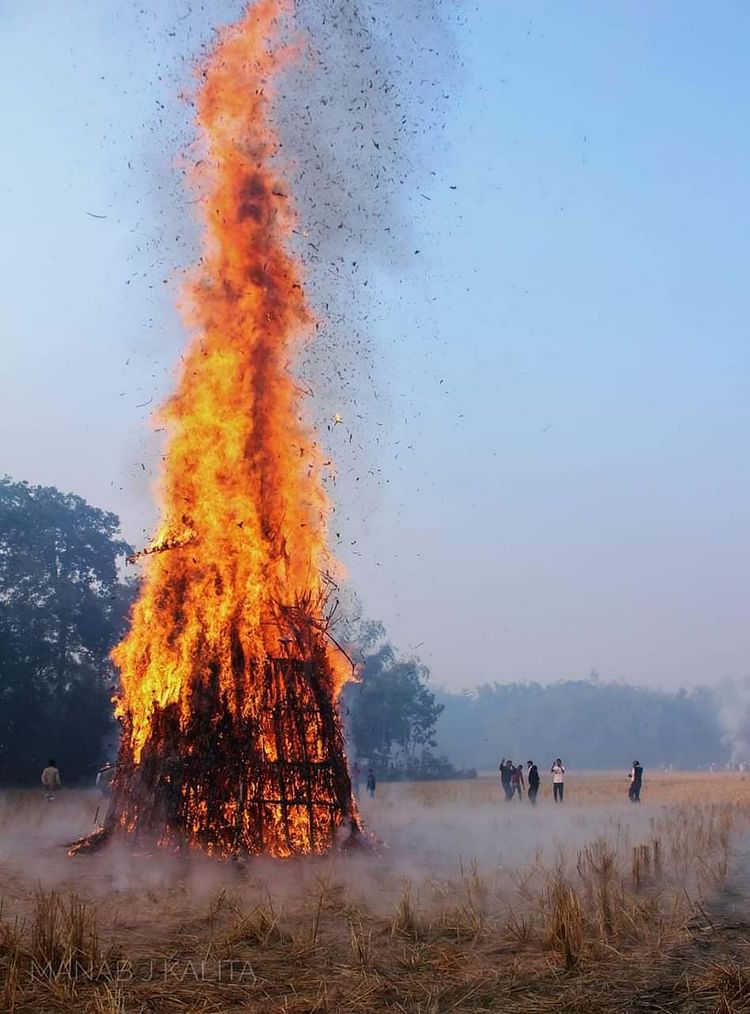 A Meji burning in the misty morning after the night of Uruka.