How SNEH Foundation Teamed up with Govt. Teachers to Tackle | Milaap

You are sending a message to
SNEH Foundation
Go back

How SNEH Foundation Teamed up with Govt. Teachers to Tackle Malnourishment in Pune Slums

By Shruti Sunderraman
23 August, 2016
Shares
Share on Whatsapp
When you enter the home of 4-year-old Altamash Sheikh, the first sound that greets you is that of kids jumping up and down the stairs. Living in a slum pocket of Kothrud, Pune, Altamash fell prey to malnutrition at an early stage. His father makes a living by selling roadside snacks to support his family of five. Slowly, Almatash’s health started deteriorating. There was lesser jumping on the stairs.
This was, until SNEH Foundation reached out to his family to awaken them to the dangers of malnutrition and how to combat it.
Altamash Sheikh’s family outside their home in Kothrud, Pune.
Malnutrition is a fairly overlooked problem in urban India, especially in low-income groups. Most families in slums are unaware of the adverse effects of undernourishment or overnourishment. They are also not privy to dietary information and what constitutes a balanced diet.
SNEH Foundation, identifying the need to address this problem, decided to begin an awareness campaign targeted at educating these families. A successful fundraiser on Milaap helped them create a strategy and awareness module which they carried door-to-door to affected families in Pune slums.
Working in tandem with Aanganwadis (a free play school of sorts for underprivileged children) and its teachers, a food pyramid was created.
“These food pyramids only use affordable, local food as components,” explains Gauri Sonawane, one of the teachers in charge of this project.
Food pyramid charts are created at Aanganwadis and are distributed to all families.

“We also provided bal kopras, which are small containers, comprising a mix of healthy food items that kids can always eat when someone is not around to provide them food. Most times, children in these areas always depend on their parents for food throughout the day. Most parents here are manual labourers and don’t return from work until evening or night.These bal kopras help children keep hunger at bay when no one is around.”
So far, the group has reached out to over 300 malnourished kids.
One of the Aanganwadis in Kothrud slums that teach underprivileged children under the age of 6.
There are three zones of measuring malnutrition – red (severely malnourished), yellow (moderately nourished) and green (healthy). 50 of the 300 children were in the red zone and the remaining 250 were in the yellow zone.
The efforts made by the Aanganwadi teachers and SNEH Foundation have resulted in 11 children moving from the red zone to the yellow zone while 35 children have moved to the green zone from yellow. The remaining 200 or so children who are constantly in danger of moving to the red zone, are being sustained in the yellow zone through continued efforts.
Naturally, this ambitious project also faced its fair share of challenges. Some of the children in a few families suffered from multiple health conditions and creating a nutritional inflow for them was a constant struggle. Sometimes, they also had to deal with non-cooperative family members.
Complete lack of earning members in the family also posed a challenge to dietary education. A case in point is Sonali, a resident in a Kothrud slum area who has three children. The eldest child, 6-year-old Janhavi, suffers from convulsions and is not physically and mentally well-developed. Her second daughter, Snehal, is similarly underdeveloped. The third child is a new born son, who is also showing signs of health issues reflective of his sisters’. All three children are malnourished. Their father is unemployed and suffers from alcoholism.
Sarang Chaudhary, Chief Impact Officer at SNEH Foundation, says, “These circumstances are difficult to work with, but these teachers are relentless. For a meager monthly salary, they work with these families to help their children lead a healthy life.”
Sonali, with her children and her mother-in-law.
But most families, like 2-year-old Dishant’s, are immensely happy with what the project has done for them. Dishant’s younger sister has moved from the yellow zone to the green while Dishant has moved from the red zone to the yellow. The joy on his mother’s face is palpable when she talks about her children’s improved health.
“Malnutrition can have a massive impact on society as whole. But, unfortunately, it’s not given its due share of the limelight and education in urban India, which is why we wanted to begin somewhere by creating awareness. You begin at the grassroots and move your way up from there,” informs Sarang. 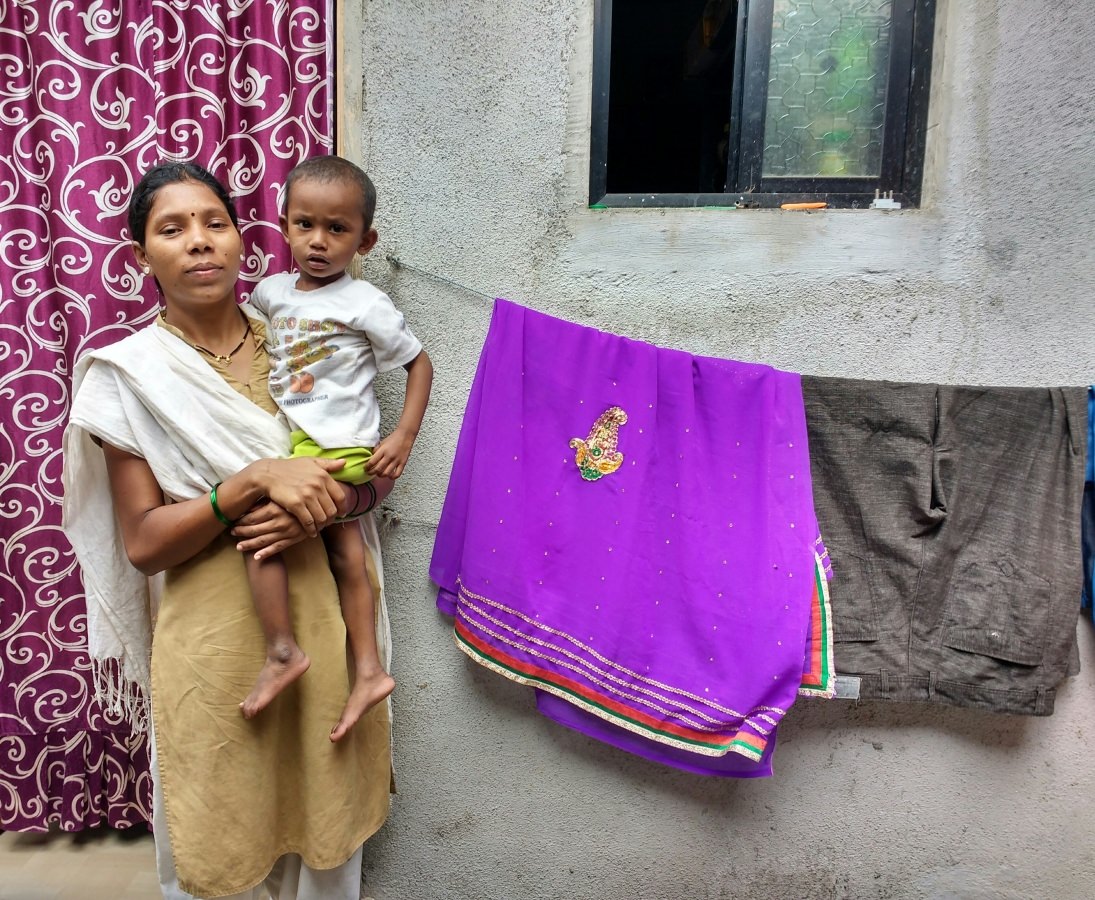 Dishant with his mother in Kothrud, Pune.
Working in an environment where malnutrition is often ignored as a social issue can be challenging and taxing.
But, the determined 30-odd teachers and volunteers associated with SNEH Foundation are relentlessly working on providing these underprivileged, malnourished children with a healthier life and pushing them towards a brighter future.
(L-R) Sarang with the social workers and teachers from the campaign, Mahananda Hange, Sandhya, Lakshmi Pawar and Gauri Sonawane.

After this successful campaign, SNEH Foundation is now raising funds to provide basic education to children in the slums of Bhumkar Chowk, Pune. You can learn more about the campaign and contribute here.

This story was originally published in The Better India.