These entrepreneurs from West Bengal are ready for more solar energy

Shares
Shares
Share on whatsapp
The one great thing about catching the 6 a.m. train to Dakshin Barasat, West Bengal, is that most of the compartments are pretty empty. I got a whole bench to myself and it felt quite luxurious to sprawl out. Normally, the train is packed with people going about their business and finding a seat is an impossible mission. After a peaceful train ride to Dakshin Barasat, I met the local DCBS branch managers in their office. After a round of tea, we all headed out to meet our respective groups. This morning, I was paired with a gentleman named Krithibas, and we headed out into the field on our bicycles. The first time we took the bicycle to the group visits, I was terrified and my eyes were glued to the road. This time around, I was able to relax and take in the beautiful country scenery that was all around me. It blew my mind that I was actually riding a bicycle down a country road in rural India as the sky reflected on the vast paddy fields that checkered the area.

The blaring horn of an auto-rickshaw zooming past me quickly snapped me out of my reverie, and a little later, we reached the home of Sarnalata Sardar. All the ladies of the group "Dipshika" are budding entrepreneurs and are involved in various trades. A lot of the women do beautiful embroidery work for clothing, but I found out that many have other things like run a chicken farm or have a vegetable business. One lady even had a little pet store that had various birds and rabbits. A while ago, the idea that women in rural India could make their own income by starting a business was unheard of. Before, in a traditional Indian household the husband was the sole bread winner, while the wife took care of the household and children. So it was amazing to see so many women "doing their own thing" and supporting their families. What was equally amazing was that many of the husbands support their wives' endeavors, and are thankful for the added income during tough times.

Speaking of tough times, one of the women in the group brought up the topic of frequent power-cuts that plague most of rural West Bengal. Kalidasi Mandal a long time member of "Dipshika" told me she was fed up with the poor availability of electricity. For many of the women in the group kerosene lanterns and expensive portable lights were ineffective and costly. On the other hand, the solar lanterns were much more powerful and easier to obtain through the Milaap loan, and were effective in all areas of these women's lives. Many other families in their communities have also opted to receive a solar lantern and the local demand is increasing. Their main complaint was they could not power all of their appliances through solar energy. Hopefully, one day, they will see this become a reality; but for the time being, they are content to at least have the solar lanterns. And they thank lenders all over the world that made these solar loans possible for them. 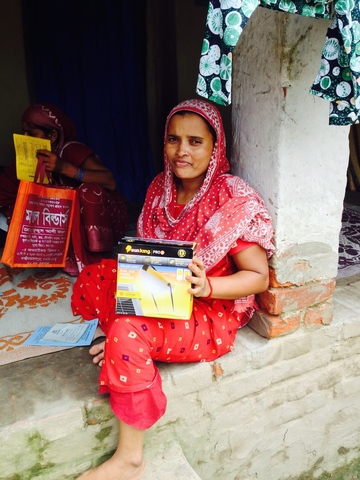