Temple Tunes and Tree Gardens: A visit to Kamatchipatti | Milaap

Temple Tunes and Tree Gardens: A visit to Kamatchipatti

I arrived in the heart of Kamatchipatti, Kamalam’s village, and was welcomed by music coming from the temple next to her house. Although many temples in Tamil Nadu have high-powered speakers, this one had a drummer inside who was singing while men and women listened intently. Urged by the Guardian (Milaap’s partner who distributed the loan) staff members, I took a seat inside of the temple. Everybody turned to stare at me. They stared for a long time. Thank goodness the drum kept beating, or it would have felt like the whole world stopped. After a thorough inspection, though, everyone returned his or her attention to the drummer. I could have sat for hours hypnotized by the music, but I was eager to meet Kamalam.

As we walked through the gate to Kamalam’s front yard, I was thankful to be with a female Guardian staff member. Kamalam was bathing when we arrived, which although frequently done in public, is something that I wanted to avoid intruding on. Fortunately, Kamalam was nearly finished, and in a few minutes she met us in her front yard in a beautiful purple and gold sari.

Kamalam has two children, 27 and 32, that both live in the United States. As an American I was naturally interested in where they worked, but when asked in what part of the states her children live, she was not sure. All of her grandchildren are in the India, though, and she looks after her daughter’s children. One of her grandchildren leapt off of the wall surrounding Kamalam’s front yard, then scampered back through the gate to climb the wall again. This continued for the entirety of our conversation.

Kamalam used her loan from Milaap to build a household water connection in the back of her house. Prior to having the water connection, she was walking 50 meters to get water from the closest tap, which was shared among 10 families. As you can see from the photo, Kamalam has a beautiful tree garden, something that she takes a lot of pride in maintaining. To satisfy the water demands of her family and the trees, she would fill up three 10-liter plastic jugs with water, then walk them back to her house and dump the contents into a water tank, then return to the public tap. She would do ten times over the course of the hour that the water was available. She said that she couldn’t quite get enough water before she built her water tap, but now has no problem getting enough water. 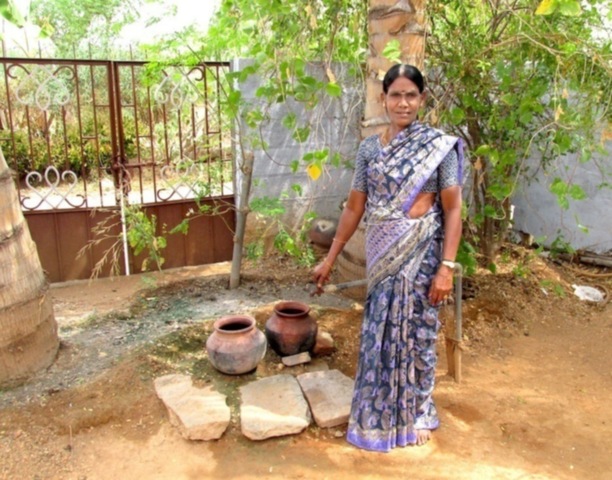