This 1-year-old Baby Boy Loses His Consciousness Because His Body Runs Out Of Healthy Blood | Milaap
loans added to your basket
Total : 0
Pay Now

Shares
Shares
Share on whatsapp
After losing her mother recently, 21-year-old Rupanjali feels terribly broken after finding out that her 13-month-old son, Surya, is suffering from a severe and fatal blood disorder. Now, after months of struggle, a bone marrow transplant is the only way out but her family’s financial condition is making it difficult for her to save her son.

Surya was completely normal until 7 months after birth, suddenly, he lost consciousness for a while. Residing in rural Bihar, he was first diagnosed with a heart problem. But, even after all the medicines and treatments, Surya was still feverish and coughing all the time.

Rupanjali and her husband, Ram, got their baby to Gurgaon where he was shockingly diagnosed with Thalassemia Major, a severe blood disorder. Now, Surya is suffering from anemia due to the disorder and has no energy to move, walk or play around like a normal baby.

“He loves to play with a ball. He can’t even do that right now. He’s just so weak and is just in one place all the time. This is my first baby and I don’t know why this is happening. The doctors in Bihar told us that he won’t be cured for life. That broke my heart but after coming here, there is still some hope.” – Rupanjali

The only hope for survival is out of their reach

Surya’s only hope of survival is to get a bone marrow transplant. The 13-month-old has no sibling but is very fortunate to have matched with other unrelated donors. But, performing a procedure with unrelated donors increases the costs exponentially.

Surya needs the transplant immediately and his parents are running out of time to arrange the funds.

Surya needs a blood transfusion every month to survive

Until the transplant, Surya needs a blood transfusion every month. Each transfusion is around two times as much as Ram earns as a salary. This is just increasing the financial pressures and points out the need for an immediate transplant to save Surya’s life.


“We have sold my belongings to keep giving him blood every month. Honestly, we had no idea what Thalassemia is, until now. After finding out, I’ve just been in tears because he’s so small and already suffering.” – Rupanjali

Rupanjali sacrificed her dreams to care for the family

“I love teaching kids and back in my village, I also tutor a lot of them. I graduated with a degree in arts and I want to pursue a B.Ed. and become a teacher at a school. After my mom passed, I had to take care of my 2 younger brothers and after marriage, I didn’t want to give up and was about to take some classes too. Now, I’m just focused on saving my son’s life anyhow.”- Rupanjali

Ram and Rupanjali are running out of time

Residing in rural Bihar, Ram works as a cashier at a mall far away. He earns around Rs. 6500 per month which is less than half of cost of a single blood transfusion. Rupanjali doesn’t work but is very ambitious despite what life has thrown her way.

The total cost of the bone marrow transplant is estimated to be around Rs. 25 lakhs, which Ram and Rupanjali cannot afford even if both worked for years.

“We are very poor, there is no way we can afford this. Everyone we know is as poor as us too. We have asked everyone and now, there is no one left to ask for help. Even if we sell our home, we won’t be able to raise so much money. It’s not a small amount. I’ve sold my belongings to give him the treatments up till now and now, we don’t know what more to do.” – Rupanjali

Ram and Rupanjali are left with no option but crowdfunding and they need our support to save Surya’s life.

13-month-old Surya Prakash is suffering from a life-threatening blood disorder, Thalassemia Major and needs an immediate bone marrow transplant to survive. Rupanjali is afraid that their poverty will take Surya's life. They need your support to save their son.

Your contribution will save 13-month-old Surya’s life 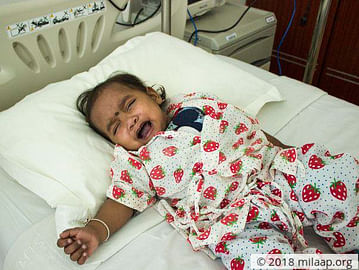 Surya Prakash is suffering from Thalassemia. His parents have nothing left to save him.