This 3-Year-Old's Insides Are Burnt By Acid And He Needs Urgent Treatment To Survive | Milaap
loans added to your basket
Total : 0
Pay Now

“My husband, Sarfraz had kept a bottle of acid to clean the AC. My 3-year-old son, Zohaib was playing around the house. In a split second his happy banter turned into painful cries. My little boy accidentally drank acid which appeared water to him. Zohaib and I went to Saudi to spend a few months with my husband Sarfraz. Our happy family time turned into the worst nightmare,”- Atiya, Zohaib’s mother.

Zohaib's food pipe was burnt badly after the horrific incident

What seemed to be a happy time for Atiya and Sarfraz, became their worst nightmare. Drinking acid has burnt one of Zohaib’s nerves near the food pipe. He not only can’t eat anything but sometimes, he can’t even drink anything. Zohaib’s food pipe gets contracted to the extent that he can’t even gulp liquids.

“Zohaib is our only child. We had guarded him with our lives. My husband, Sarfraz was staying away from us only to ensure that our child has a better future. But now it’s all gone. Now, it's so painful for us to not be able to sit with our child for meals. It kills us to eat in front of our own child who keeps asking for food but can’t have anything”-Atiy

Although he gets treatment every 3 months, its effects last only for 15 days

Every 3 months Zohaib has to undergo endoscopy so that his oesophagus can stay open and he is able to eat. But only after 15 days, it goes back to the same condition. The endoscopy cannot be done in less than 3 months because the anaesthesia given in the process can affect his brain and turn fatal.

"It took us a while to understand what went wrong after Zohaib drank acid. He was treated in Saudi for 11 days. We came back to Nizamabad, Andhra Pradesh where my family lives. Since then his treatment has been going on. He can't eat or drink now, but if he does not get proper treatment, it can get worse"- Sarfraz, Zohaib’s father

Zohaib is in tremendous pain and cries almost the entire day. He keeps tossing and turning relentlessly on the nights when he gets a burning sensation in his throat. He cries asking his parents for food. If the parents give him something to eat, he throws up immediately. He is barely surviving on juice, milk and glucose diet. But sometimes, even that is difficult for him to put down.

"It's painful for us to see our only child suffer so much. We try to soothe his throat with liquids, but nothing is helping. Things are getting difficult with every passing day”-Sarfraz

Zohaib still needs to undergo endoscopy 5-6 times more to get better, but his father can't afford it

Sarfraz has no job now. All his savings are gone now and his brother is the only help he has now. He can only get money if he can go back to Saudi and continue working as a technician again.

In Saudi, Sarfraz had already spent Rs 3 lakhs in 11 days. For 1 year now, he has been spending Rs 40,000 every 3 months for Zohaib’s endoscopy. He had to take emergency leave to bring him to India for better treatment. In between, he had to go back again so that he wouldn’t be sacked. Sarfraz can no longer afford to continue Zohaib’s treatment, but letting him suffer isn’t an option for him either.

3-year-old Zohaib has a contracted food pipe after he accidentally drank acid. He needs to undergo endoscopy and corrective treatment. His father, Sarfraz has spent everything he had. He has nothing left to save his only son. The cost required to save Zohaib now is Rs 3 lakhs which is impossible for him to arrange now.

Your support can help this child eat and drink again 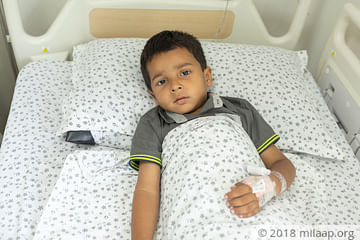