Shares
Shares
Share on whatsapp
Growing up in extreme poverty, 14-year-old Yash always had a clear aim: he wants to earn well some day and give his parents a good life. After all, he had seen his father struggle to take care of their five-member family on his meagre income – on some days, affording even one square meal was difficult and everyone would go to bed on an empty stomach. They were so poor that they had to depend on relatives’ mercy to get new clothes during festivals and special occasions. But Yash was determined to rise above all that - apart from being a good student and a teacher’s pet, he excelled at mathematics and science, and aimed to be an engineer. He had begun working extra hard to reach his goal when he was diagnosed with a severe blood disease recently, that now threatens to take his life. His parents have run out of money and are without help to save their bright son.

Yash was always an active kid. Due to the space restrictions of their humble home in Nasik, he preferred to spend most of his time outdoors playing cricket and kabaddi with his friends, when he was not studying. Whatever he did, there would always be a smile on his face. But two months back, he got recurrent episodes of high fever and giddiness that did not go away even with medicines. Many blood tests later, Bajirao and Anjana were told that their son was suffering from severe aplastic anemia, a dangerous disease where the body stops producing new blood cells, making it more susceptible to deadly infections.

“Being uneducated, we did not understand about the of the disease at first – but when the doctors said that without prolonged treatment that includes weekly transfusions, he would not survive, we got really scared. We had not been faced with such a situation before. I remember crying continuously on the day he was diagnosed and trying hard to hold back my tears in front of Yash. I had to lie to him to get him admitted, saying it is just to fight a small viral infection. My poor child was so full of life, I don’t know why bad times have fallen on him”-Anjana, mother

Yash is extremely weak now, but he tries to put up a brave face in front of his mother

Neither of his parents has told him about his life-threatening condition, but he senses it. He tells Anjana, even in his weakness, that he will fight any situation bravely, come what may. His only disappointment is that he had to miss Ganpati Visarjan this time, due to being admitted in a hospital in Borivali, far away from home. He keeps telling Anjana that ‘He couldn’t meet Ganpati this time, but he will meet him next year when he’s healthier’ with a forced smile. Seeing her child’s resilience gives Anjana the strength to hope that he will be fine soon – but reality of their poverty soon strikes her and she becomes upset again.


“His whole body hurts and though he doesn’t complain, I can see him writhing in pain. He hates the injections, but you can never see that on his face. He is trying to be my strength even when he is totally weak. I cannot help him and it is killing me inside.”-Anjana, with tears in her eyes.

Being a poor cobbler, Bajirao cannot afford Yash’s treatment and is struggling to save him

Every day, Bajirao stitching hundreds of pairs of shoes from dusk to dawn, but he is still able to earn only Rs 100 – 150. It is on this meagre salary that he raised three children – two elder daughters and Yash. He couldn’t give them the ideal upbringing, but he made sure to provide them with education, and that was more important to him than anything else. He had to beg and borrow to marry off his eldest daughter recently and was still reeling under pressure from loan sharks when Yash fell sick. He had to borrow Rs 1 lakh just for Yash’s treatment so far. Now, he has exhausted all the money he had and is not able to afford even food now.

“My wife and I can starve and I can pull my second daughter out of college to save money– but that is still not enough to save my son. Without treatment, he can even die – I know that very well but I am completely helpless. Only God can save him now.”-Bajirao, father

14-year-old Yash is suffering from severe aplastic anemia and needs prolonged immune suppressive therapy to survive. His poor parents have exhausted every last paisa they had and are struggling to continue his treatment. Yash is full of dreams for the future, but without help, none of them may come true.

Your kind contribution can save 14-year-old Yash 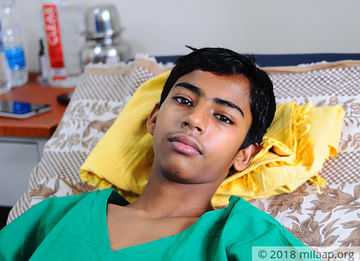 Yash's Body Does Not Produce Enough Blood, He Is Critical

UPI: givetobajiraobhikajigh@yesbankltd (Copy to clipboard)
Or
Click here to read the instructions before you make a bank transfer.