Every Second Is A Painful Struggle For This 2-Year-Old Who Needs An Open Heart Surgery To Survive | Milaap
loans added to your basket
Total : 0
Pay Now

Shares
Shares
Share on whatsapp
Little Venkata has never known a life free of pain and suffering. He was kept in intensive care for eighteen days soon after he was born due to his extremely low birth weight. His mother, Saraswathi, hoped that her son would get better after his stay in the ICU, but much to her despair, she was told that her son had a severe heart disease. Ever since then, his parents spend most of their days rushing him to the hospital every time Venkata struggled to breathe, while their nights were spent trying to pacify their crying baby.

Venkata lives with his parents Venu and Saraswathi and his elder brother, Akhil (4) in a remote village near Gudur, Andhra Pradesh. He was diagnosed with Tetralogy of Fallot, a rare heart condition because of which the blood doesn’t carry enough oxygen to different parts of the body. He constantly has difficulty in breathing and cries uncontrollably. Now only an open heart surgery can save him from this fatal heart condition.


“The doctors said that it was too risky for my son to undergo a surgery when he was just a few days old and so we waited. But now his condition is worsening with each passing day. He cries every day and I try to distract him by showing him his favourite cartoon on my phone, but he feels better only for a few minutes. Nothing I do now comforts him. I feel helpless for I have nothing left to save my son. ” - Saraswathi, mother

As a daily wage labourer earning a minimal income, Venu did everything he could to start his son’s treatment. He has spent about 1 lakh rupees that he borrowed from others, just for Venkata’s regular hospital check-ups. But now providing an open heart surgery of 4 lakhs by earning a meagre income of Rs. 7000 is impossible for Venu.

Little Venkata gasps for air every minute and cries day and night as he has difficulty in breathing. His condition is worsening with each passing day and he needs to undergo immediate surgery, but his poor parents cannot afford.

Your support can help this little one undergo life-saving surgery 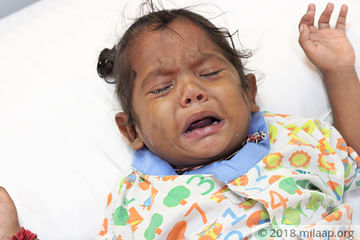