Abandoned By Parents For Being Deaf And Mute, This 24-Year-Old Is Now Fighting Deadly Cancer | Milaap
loans added to your basket
Total : 0
Pay Now

Abandoned By Parents For Being Deaf And Mute, This 24-Year-Old Is Now Fighting Deadly Cancer

Shares
Shares
Share on whatsapp
Udaya has had a life like no other. Born deaf and mute, he was abandoned by his parents when he was just a little boy. Ever since then, he has been taken care of by his biological father’s brother and his wife. Pounamma and Govindaswamy brought up Udaya as their own. They tried to give him the best childhood they could and even got him admission in a deaf and mute school despite their financial hurdles. With school, Udaya had long forgotten the trauma of his childhood. He was extremely active and didn’t let his disability dim his spirit. He hoped that one day, he would also have a job. Unfortunately, a few months ago, Udaya’s life once again took a turn for the worse –  he was diagnosed with deadly blood cancer.


“My son hasn’t had an easy life, but I never imagined that one day he would fight a disease as grave as cancer. After everything he’s been through, I was happy watching him lead a ‘normal’ life. He doesn’t have a degree like other 24-year-old’s his age, but he would always tell me that one day, he will stand on his own feet and make us proud. Now, he’s losing everything to cancer – a disease he’s never learnt to say through sign language or understand.” – Pounamma, Udaya’s  adoptive mother

Despite his disability, Udaya’s positivity and spirit shone through – but it’s not enough to save him from cancer

“We’re not educated, so we didn’t understand how we could help him when he got him home for the first time. As a child, he would always just stare at us blankly when we all sat down to have dinner together. We soon began learning sign language and enrolled him in a school. He worked so hard every day, he always wanted to better himself. Till a few months ago, our day began with reading the newspaper together. However, one morning in May, Udaya couldn’t get up from his bed. He had a fever and felt unusually weak. Every bite of food made him nauseous. He kept telling me that he felt very uncomfortable, we never thought that his fever would turn out to be cancer.”

Udaya has blood cancer and he needs four cycles of chemotherapy to survive. Unfortunately, his parents don’t even have the means to start his treatment. Udaya is running out of time without chemotherapy, and his helpless parents are running from pillar to post trying to find a way to start his life-saving treatment.

His helpless mother works all day trying to afford his treatment, but still can't afford his life-saving treatment

“Many people asked us why we wanted to take care of a child that was deaf and mute, but from the moment we brought him home, he was our son. We couldn’t even afford his education after class 12, and due to his disability, he hasn’t even been able to get a job. I’m willing to do anything to save him, but we’ve already delayed his treatment for far too long. Every day I see him getting weaker, and I can’t do anything about it. No matter how hard we all work, it’s impossible for us to afford his treatment that costs lakhs.”

Pounamma works as a helper in an office in Bangalore, while her husband is a daily wage labourer. Her older son, Chandrashekar, also works as a daily wager to try and support the family in these trying times. However, all their incomes together aren’t enough to start Udaya’s treatment. They have no one to support them and are desperately looking for help.

Udaya doesn’t understand the implications of his disease. As a child, he was never taught the meaning of this grave disease. Udaya understands he’s extremely sick, but he doesn’t know that he could die without treatment. His parents, however, are devastated. All Pounamma wants is save her son from cancer, but she’s falling short. Udaya needs your help to start chemotherapy and have a chance of a healthy future.

Your support will save Udaya’s life. 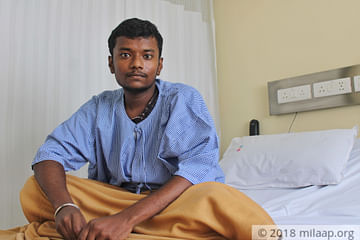 All Of His Hopes And Dreams Are Shattered Because Of Cancer, He's Running Out Of Time Without Treatment

Udaya needs chemotherapy to fight cancer and he can't do it without your help.

UPI: givetopounamma@yesbankltd (Copy to clipboard)
Or
Click here to read the instructions before you make a bank transfer.