Teen Who Discovered On Google That She Is Going To Die Needs Your Help | Milaap
loans added to your basket
Total : 0
Pay Now

"My parents did not tell me I am going to die. I found the truth on Google. I also know they cannot afford to save me." - Swetha

When Swetha read the words ‘aplastic anemia’ in her hospital reports which she secretly took from her parents, she first Googled it. The search results not only said that her body cannot produce blood cells anymore, but also that it could kill her. Ever since then, all Swetha does is read about the disease, checking one website after another. A bone marrow transplant is the only thing that can save her, but she has read about how expensive it is.

They mistook her rashes and bruises for insect bite allergy

4 months ago, after coming back from school, Swetha was extremely exhausted. That night she got rashes all over hands and legs. Her parents, Solaiammal and  Velusamy, thought it might be an insect bite but the next day she could barely get up.  Her skin and lips became pale. She was weak, and in pain. They took her to the hospital and her blood test showed an abnormality. She was anemic. After more tests, she was diagnosed with aplastic anemia.

“Amma, I know I will die without a transplant”

Swetha's parents did not know that she is aware of her disease. In fact, she now knows more about her disease than they do. Over the days, her body pain and fatigue became extremely unbearable. They tried to comfort her saying that she would get better after a few more transfusions.

"Amma, I read that some people can suddenly die if the blood count becomes very low. I know that I will die without a transplant," said Swetha, shocking her parents.

Swetha is in 11th standard and she was all excited about joining NEET (an entrance exam for students who wish to study medicine) coaching classes. She has in fact applied to a few of the centers, but now her condition has left her confined to her house. She steps out only for the blood transfusions once in 20 days.

It has been 4 months since she went to school. One day, her friends came her to visit her, they told her about the NEET classes, she cried so much after they left. She knows if she goes out she'll get infections that can kill her. " - Solaiammal, mother

Swetha's father Velusamy is a daily wage worker in Kalpakkam, Tamil Nadu. He does construction work, sometimes he works on a farm too. All he earns is Rs 400 per day. He managed to pay for the transfusions by borrowing from his friends and relatives. He needs  20 lakh for the transplant but he doesn't know anyone who will lend that to him. He has nothing to even mortgage.

"My daughter knows that I cannot arrange such a huge amount. My daughter gave me the money that she had saved for getting college applications. It made me cry." - Velusamy.

Swetha was very hopeful about her future and she believed that she would become a doctor one day, but now all she can think about is death, you can help her escape this pain and trauma. 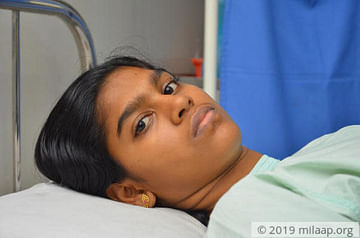 Swetha Lives In Constant Fear Of Losing Her Life

She wants to join NEET classes and become a doctor one day, but now her future is uncertain